What is the worst YEC argument you’ve ever heard?

A “friend” of mine once told me that the fact that Ice exists on Mars proves the earth is young, as it would have melted if it was too old.

Anything about Dinosaurs or a spherical earth in the Bible also deserves a dishonourable mention, as does a claim I once encountered that the Bible correctly predicted that humans turn to dust when we die, rather than simply rephrasing Ancient Sumerian ideas. (The Epic of Gilgamesh claims Enkidu turned to clay when he died, which was th material humans were made from)

This is one of my favorites of all time:

A lot of Hovind arguments would be up there for me, but there were several along the lines of “the earth’s orbit is slowing down at a certain rate, therefore if you go back millions of years it’d be spinning too fast to sustain life.” (Same with the sun shrinking, the moon drifting away, etc.) Pair that with “carbon dating doesn’t work because we don’t know whether the rate of decay has stayed the same!”

Pair that with “carbon dating doesn’t work because we don’t know whether the rate of decay has stayed the same!”

When I first heard the RATE project’s claims of accelerated nuclear decay, which they are claiming to be supported by “overwhelming” evidence despite their own admission that it would have raised the temperature of the earth to 22,000°C, I thought I must have been reading some kind of parody rather than genuine creationist literature. Had the Answers in Genesis website had been hacked or something?

When I mentioned it to one YEC friend, he said he thought exactly the same.

I teach science at a Christian college and every semester I get at least one paper on laminin proteins that are in the shape of a cross.

This is one of my favorites of all time:
https://www.youtube.com/watch?v=pzoI0_IBpS4

Anything from Carl Baugh is also worth a mention. Especially his absurd claims regarding astronomy which he has not given a single shed of scientific evidence for.

My personal favorite is “Change and time are diametrically opposite worldviews.”

Here’s another one. On the one hand:

“The Oort Cloud does not exist, and the Kuiper Belt is too sparsely populated to be able to account for the existence of comets.”

Yet on the other hand, according to the same author:

What recent photos of Pluto revealed was a shock to conventional uniformitarian scientists who believe in a 4.5-billion-year-old solar system.

“Pluto orbits in one of the most crowded parts of the Solar System.”

My personal favorite is “Change and time are diametrically opposite worldviews.”

My personal favourites are the banana argument and the peanut butter argument. A close runner-up is the crocoduck. Google is your friend.

Any arguments that prominently feature Kirk Cameron should make it in the top ten, because…Kirk Cameron. How can you not love them?

I would nominate Nasa’s missing day attributed to Joshua. Not so much a YEC specific thing as it is a “literal-story-told-you-so thing”. Still … you gotta admire the detailed calendar those Nasa techs must be sitting on. Maybe Trump will declassify it so that historians and scholars can finally see how everything went down.

The banana argument, though … that’s got me all shaken up. I used to be so sure of myself … but I just don’t know any more.

May not be able to be back for a while. Have some soul searching and a lot of research to do.

Obviously, the banana thing totally destroys the theory of evolution, as it is well known that monkeys peel their bananas from the other end, thus giving proof that we are not related.

Obviously, the banana thing totally destroys the theory of evolution, as it is well known that monkeys peel their bananas from the other end, thus giving proof that we are not related.

Yes, Ray Comfort discovered that the banana is perfectly shaped to fit the human mouth. Clearly, the banana is a poor form of nutrition for any other animal.

I just learned Kirk Cameron made a board game. How is it even possible that I have been on this forum for three years and nobody told me this? I have no words. Why have I been wasting my weekends with some iteration of Settlers of Catan when I could have been amassing more brains? 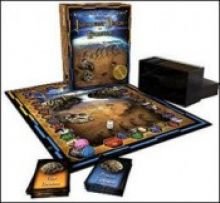 The discovery of tiny fossil fragments in the deserts of Africa by two leading anthropologists has amazed the scientific world. Early man may not have only used primitive tools and a primordial langua ...

Steven Anderson (search him up on youtube, he’s a pastor, although I think his account got banned) once argued that dinosaurs are fake because the dinosaur reconstructions and ‘bones’ are obviously fake. To support this, he said that t-rex arms are really small and look like chicken arms, so it has to be fake since t-rex must have had much bigger arms. I’m wondering if he’s done anything past looking at the cartoon drawings and actually finding out t-rex’s arms were (to my knowledge) about a meter in length, a little bigger than chicken arms to my knowledge.

A close runner-up is the crocoduck

A goldmine of material for the folks over at the Dawkins foundation I’m sure.

Interesting reviews. I really can not tell if the positive review is sarcasm or if serious, which is rather disturbing.