Has anyone had a conspiracy theorist friend or family member ask you to leave Whatsapp and other apps that “collect” your personal information, and communicate only on Signal and Parler? (apparently Parler is going off the air because no one will carry it). If so, what have you done? Presumably, this is because they are afraid of being tracked and having their posts taken down (or prosecuted).

My inclination (I don’t use Facebook, but I do use Whatsapp) is to follow them wherever they go, to keep up the relationship; but I’ not going to give up Whatsapp for communicating with other folks.

Are there other reasons to leave or stay with these apps? Possibly it would be safer for those who work in dictatorships that censor faith as well.
Thanks. 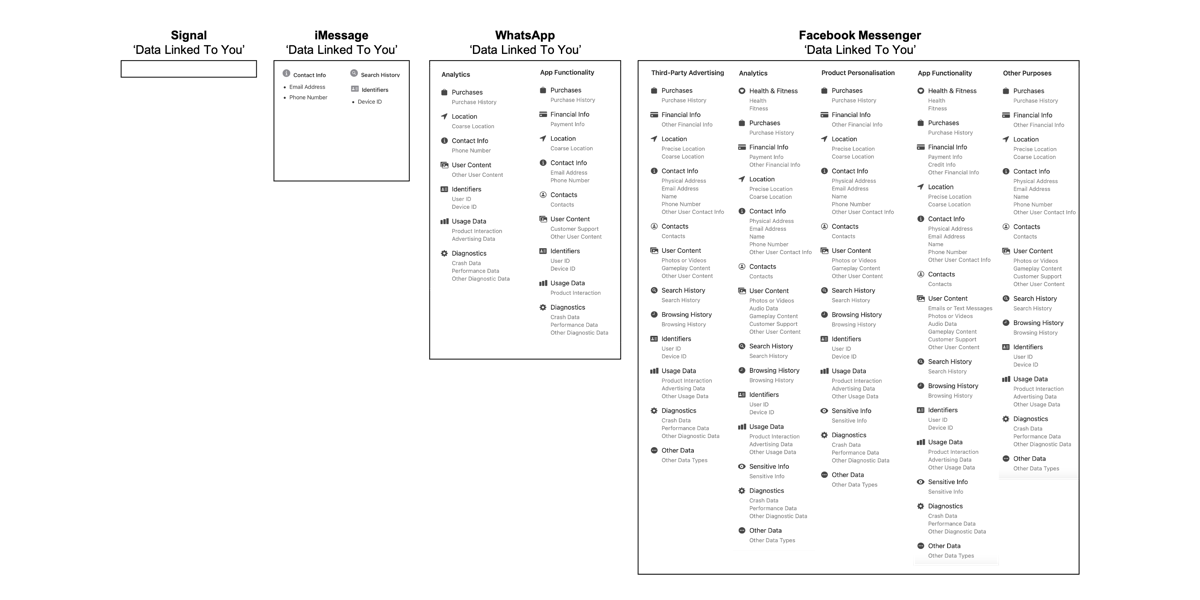 Apple's new app privacy labels went live in the App Store last month, giving users the chance to see what data is collected by each ...

I dont know about other apps. But Facebook has been proven shady. The amount of collecting what you want so to provide you with ads its pretty annoying. I cant remember one thing that i searched that later didnt see an ad of it. Truth is all social media collects private information whether we like it or not. Of course its up to us to accept. So Parler etc etc is no different than the others expect that it maybe doesnt ban certain types of videos or posts uploaded

I see some of my right leaning friends looking at Parler and MeWe. Some have realized that a lot of bad characters hang out there, but some are enthusiastic about it. It will be interesting to see. People are so inconsistent, both with that, and with equating a company exercising their rights in kicking abusers off to claimed government oppression in limiting businesses due to health concerns.

I guess I don’t care about data collection being used to interpret trends and general consensus and personalized ads.

It’s bad if evil dictators are abusing it but let’s face it they always will.

None of my friends or family have suggested I go to those networks (which I’d never heard of). In general I’m not looking for more online networking so I wouldn’t add new networks without dropping others. Facebook is the only social network I use regularly. I’ve added Twitter and Instagram at different times but never made it a regular thing. Oh and I did use Whatsapp for a while when my wife was in China or somewhere that didn’t have available Skype or Messenger.

As for worrying, I don’t. I realize that anytime I research products on Amazon that I’ll see those same products suggested on Facebook even after I’ve ordered the product. Pointless, but harmless. What bothers me is all the cold call promotional come-ons I get on my phone and by text. I wish there was a national registry we could report them to and which we could consult before doing business with anyone. I would never do business with these clowns. But grand conspiracies involving my personal data I do not worry about.

Recent events are demonstrating that pushing a conspiracy theory can be the worst of conspiracies and itself a possible tool for insurrection, coup, and dictatorship.

I haven’t had any family members ask to switch to a different messenging platform (and I’m old-fashioned and would just as soon use email anyway). But I’m a member of several homeschooling groups on facebook, and several have had public requests from a few members to move to Parler or MeWe. Sometimes it devolves into a political debate, but sometimes there is pushback from others about whether they really want to be on a platform that allows anything, including pornography. I guess it’s an interesting exercise in the various pros and cons of “freedom.” From what I’ve seen, the group admins who engage with it say that others are welcome to start groups on other platforms, but that they don’t have plans to transfer the entire enterprise somewhere else – which sounds sensible to me, because you have to be careful not to get caught up in a “grass is greener on the other side” wild goose chase.

Parler was shut down yesterday because Amazon pulled its servers.

Remember when Christians were outraged over Cuties on Netflix and we were all supposed to cancel our subscriptions because it was out of character for Christians to support a platform that hosted content that appealed to pedophiles? Oh, but that logic doesn’t at all apply to a platform that hosts content that appeals to Neo-Nazis and violent insurrectionists. Now the argument is we are only responsible for what we personally consume. It’s hypocrisy.

But at the end of the day Parler will likely be ruined over this latest Amazon move. They evidently had no back-up servers and the architecture was poorly designed. Or maybe their Russian connections will come through for them and we’ll all see what kind of patriots they really are.

The place was well-known for hosting Neo-Nazi hate propaganda and other terrible things.

I did not know that. Is Signal like that?

What’s ironic is that the coding and security on Parler was so poor that something like 56 terabytes was able to be retrieved, “capturing around 99.9 percent of its content”, and “raw video files [which] include GPS metadata pointing to exact locations of where the videos were taken.” So that data presumably can be used by law enforcement to track down more of the perpetrators.

The fears about WhatsApp came up at my work. One of my colleagues who manages a lot of our IT stuff shared this fact check article:

WhatsApp is facing a privacy reckoning, largely due to Facebook’s poor reputation.

So how did Parler work out for them lol.

So I was joking about what happened with Parler, but it’s also a legitimate concern for me. It does almost seem like freedom of speech being eliminated. On Facebook we see hate speech and it gets removed and the person silenced or banned. But to ban a entire platform is a bit crappy I think.

Is it? Do we really think that’s how it’s supposed to work? Tomorrow should I be able to say all gays and blacks need to stay out of my business and that women can only enter if they are accompanied by a man? That would not be very beneficial and it would be an abuse of what a free market is supposed to be. Freedom does not mean all authority and power.

What I am saying is that when businesses (like Facebook, YouTube, Amazon, Twitter) decide clients are violating their user agreements by posting violent, racist, or obscene content and refuse service, that is free market capitalism, not a violation of people’s rights to free speech.

Except that’s not what happened. Some users used a site for some crap and then the entire site is blocked from amazon app stores and ect…

It would be like if google refused to allow BioLogos to show up in its feed because someone posted something crappy on it despite the majority not doing that.

Like I said before if someone posted something crappy on Facebook, then that person is reported and that person gets banned or silenced. It’s not that Amazon suddenly says Facebook can no longer have a app on their site.

It’s a very bad move. I don’t see anything good coming from it. You’re doing mass punishment and silencing entire platforms over some users. This is clearly a political thing, and not a user agreement thing.

For example. Everyone that was on parlor is now heading to MeWe. A site that I use occasionally and so does millions of others. It does not have the resources of Facebook. Amazon could easily decide that they won’t allow a MeWe app, and apple may decide not to allow a MeWe app. Then suddenly, MeWe loses its client base.

Such as the 70,000 people ban based around Twitter saying they were associated possibly with the whole Qanon thing and thousands and thousands of those people stated they don’t even know what that is but the banning was focused on conservative paradigms.

I’m not even anywhere near being conservative. But I still recognize what’s going on for what it is. It’s unchecked online power.

Parler was the client, not each individual user. They failed as a business to uphold their user agreement with another business by not having effective systems in place to monitor the content on their site. It’s totally fair.