Science and the problem of demon-possession

I guess this is a discussion linked to science and faith, since it concerns possible conflicts between science and the Bible (do delete if inappropriate). I’ve been reading John H. Walton’s book on Demons and Spirits, and I found this quote interesting,

This comparison I thought was apt, because what passes as demonic affliction, both inside and outside the Bible, often strikes me as having entirely naturalistic explanations. For example, see when Jesus cures an epileptic in Matthew 17 by exorcising a demon that was possessing him. The earliest demons in the ANE, the utukku of Mesopotamia, which have parallels to the Unclean Spirits of Jesus’ time, seem to be largely explanations for illness. Disease is always referred to in diagnostic manuals as being the ‘hand’ of a supernatural entity, whether divine or demonic. Strokes, for example are caused by the demon Shulak, whilst epilepsy is caused by Lilu/Lilitu. All in all, it seems like a lot of demonology originated as a prescientific explanation for illness.

I’m actually somewhat agnostic on the existence of evil supernatural entities, but think that if they ‘do’ exist, they are nowhere near as active as the New Testament (but not the Old Testament!) frames them, I think it’s definitely culturally conditioned.

How we reconcile the divine authority of the New Testament (and the Catechism of my own Church) with reason is another matter. I guess I’d be fine with the apostles, or gospel writers ‘thinking’ Jesus cast out a demon from a boy, when he really just cured him of epilepsy. Probably a bit harder with ‘legion’ (though that story seems like a political statement against Rome).

So what do you think, can/should a theology without demons be developed?

The thing you need to remember is the bible is a concentration of God’s actions so you have to expect a higher than average number of miracles in the bible.

It’s also difficult to appreciate time scales in the bible. If you read chronicles or kings, you’ll notice that their where generally 2 or 3 bad kings before god intervened and this would be just a few verses.

Second, the death of jesus christ lead is what defeated the enemy. Before jesus death the devil was still actif after he wasn’t. you’d expect less possessions as a consequence.

I guess I’d be fine with the apostles, or gospel writers ‘thinking’ Jesus cast out a demon from a boy, when he really just cured him of epilepsy.

I’d have problems with this because it would make Jesus a liar which is a bigger problem than struggling in explaining demons.

Edit:
It might not be clear here that demonic is not a justification for sin nor does it absolve you of sin. I probably wasn’t clear but demons can’t just take controle of us we have to accept their controle.

Also possession would also be used as an explanation for psychological disorder like multiple personality disorder.

But I’d agree that people probably give far to much credit to demons. It would certainly not be my first conclusion if I had to identify a problem and I would definitely advise professional assistance. I’m just not willing to say it didn’t or doesn’t happen.

should a theology without demons be developed?

It’s a no brainer. It must be. It has been. Furthermore a theology of the synergistic evil of human systems, of institutionalized injustice needs to be fully developed. A theology that confronts the absolute cowardly evil insanity of blaming school spree shootings on everything and anything but guns.

So what do you think, can/should a theology without demons be developed?

My opinion is not prevalent here, however. Most here accept demon possession, including moderators.

Demon possession appears to be either hidden or rare in the western world. I have not seen a single evident case.

I discussed about the topic a few days ago with a retired pastor and he remembered one case: a cursing young women that reacted to a situation where believers tried to pray for her by escaping. He was a strong man and stood in front of the door to prevent that woman escaping. The woman looked like a ‘normal’ weak woman but lifted him up in the air easily, like she would have supernatural powers. Then she escaped through the door before anyone could do more. The pastor judged the woman to be possessed based on her strange behavior, what she said and the seemingly supernatural powers. The pastor did not tell more about the case, so I do not know the details.

Yeah, such anecdotes, like those of healing, say more about the witnesses than they do about the supernatural. I have two. I used to walk through the Valley of Death even up until about 10 years ago, for over forty years. I now just walk through the demon free but narrowing valley of death.

Demon possession appears to be either hidden or rare in the western world. I have not seen a single evident case.

Yes, demon possession usually seems to be witnessed by missionaries who are working with superstitious, non-white people. The savages!

[EDIT: This was meant to be a sarcastic comment]

What, the missionaries? Yes. What a waste of privilege.

I once heard a sermon that suggested that demonic activity being more prevalent when Jesus was here should not be surprising, since they knew who he was. It was a couple of decades ago and that little bit doesn’t do it justice and it was much better developed than that. And then Screwtape and Wormwood come to mind. (If they don’t, then maybe reading or rereading The Screwtape Letters is in order. ; - )

Trying to see if it might be available about an aboriginal African native leaving his tribe and animalism because he could not accept the beliefs (an account I read back no later than the 1960s), my Google search terms were “account of a tribesman from animalist tribe leaving and finding missionaries”, I found this: 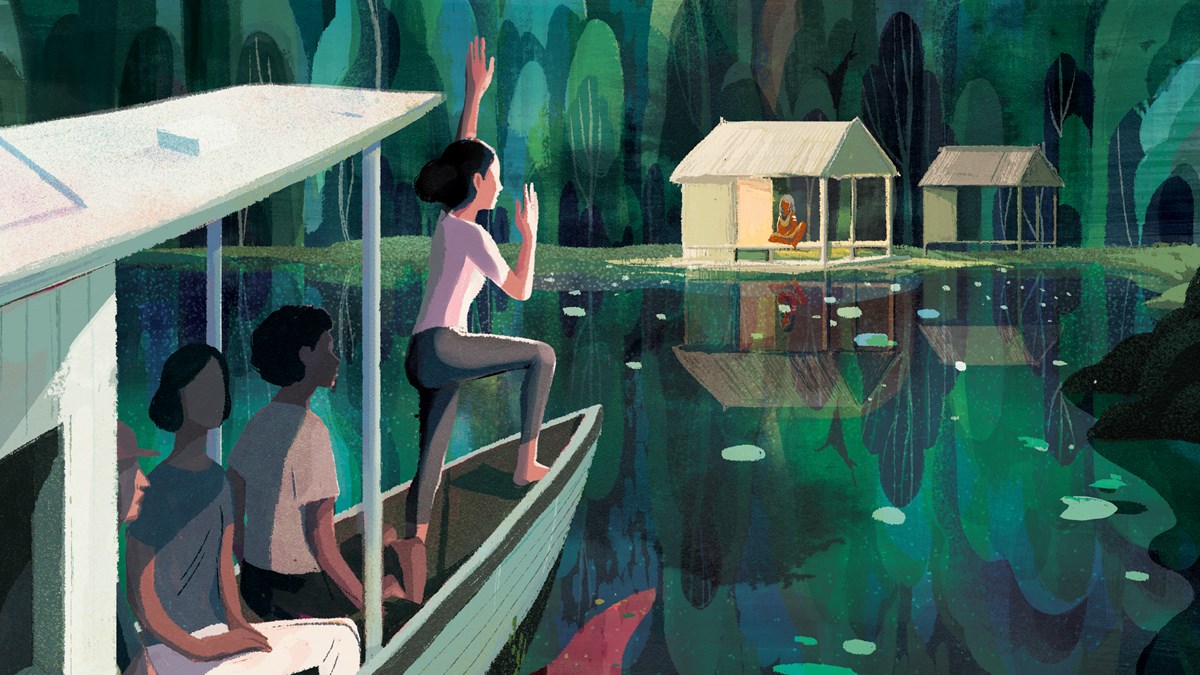 We Set Off to Reach a Remote Tribe in the Amazon. Turns Out, They Were...

As young Brazilian missionaries, we learned to depend on God and the people we journeyed to reach.


And then I’m reminded of a couple of books by missionaries, End of the Spear and Peace Child, both cool stories about privilege not wasted.

I once heard a sermon that suggested that demonic activity being more prevalent when Jesus was here should not be surprising, since they knew who he was

They don’t know who he is now?

I think it’s because we no longer attribute mental illness and epilepsy to demon possession, at least in the modern world. There are still places in the third world where the mentally ill are chained up in “prayer camps” because there is little medical help for the mentally ill.

See this: Report Decries Treatment of Mentally Ill in Ghana

They don’t know who he is now?

[The sermon] was a couple of decades ago and that little bit doesn’t do it justice and it was much better developed than that.

Fair enough, but how do you think it’s possible for today’s demons to not know who he is?

But don’t worry–my opinion is definitely in the minority! Most people here, including moderators, accept demon possession. There was even a junior moderator (no longer here) who clamed that epilepsy was a combination of neurological disorder and demon possession. Nice, don’t you think? Perpetuating the stigma. Other cultures turned to demon possession as an explanation for things they didn’t understand. The ancient Greeks called epilepsy the “sacred disease.”

The point was not merely that they knew who he was, but that he was here, in body and in person. Is he here physically now? And there was more than just that. The pastor’s wife had been a missionary to Africa, and there were a couple physicians in the congregation, so he was very cognizant of the medical aspects to the question. What part of ‘demonic activity was more prevalent’ back then, directly implying less so now, did you not understand?

[The sermon] was a couple of decades ago and that little bit doesn’t do it justice and it was much better developed than that .

I don’t think it matters that Jesus is not physically present now. If anything, his absence should have emboldened demons to possess people even more. Nothing to stop them!

This post was flagged by the community and is temporarily hidden.

Demon possession is not a catchall explanation for disease in the New Testament. Some cures are identified as physical healings and some as exorcisms. Most, but not all, exorcisms report associated physical symptoms. All are reported too briefly to draw very definite conclusions. There is debate as to whether demon possession is accurate terminology for the phenomenon (though I did not find the objection that I encountered very clear - spelling out what they thought “demon possession” meant would probably have helped).

At any rate, if a demon had influence over someone, I suspect that the demon might not be an entirely competent handler. Just as the Gadarene pigs did not respond well to the invention of deviled ham, it is conceivable that disease symptoms could be triggered by demonic efforts to manipulate someone. The father of the “lunatic” boy with epilepsy-like symptoms (as far as can be told from the account) claimed that the demon was trying to harm the boy by throwing him into danger, but otherwise there’s no statement that would indicate whether the demon is trying to make things miserable for the person or if the symptoms actually tend to interfere with the demon’s ability to use the person to cause greater harm.

The suggestion that demon-possession might have declined relative to New Testament times posits that Jesus’ continuing presence through the Holy Spirit contributes to a low frequency of demon possession in areas with strong Christian influence. Obviously, actually quantifying the frequency is not very feasible; it is also possible that demonic strategies vary.

I guess I’d be fine with the apostles, or gospel writers ‘thinking’ Jesus cast out a demon from a boy, when he really just cured him of epilepsy. Probably a bit harder with ‘legion’ (though that story seems like a political statement against Rome).

I think it really was a political statement. Several Roman legions had shields bearing the image of a wild boar! Pigs are unclean animals, as you know. There are some major difficulties with other aspects of the story as well:

I quote from “An Introduction to the New Testament” by Raymond E. Brown (not too shabby a scholar):

> There is a major geographical problem in Mark’s location of the scene where the pigs can run down the embankment and drown in the sea. Gerasa is a site over 30 miles from the Sea of Galilee , and the alternative reading Gadara is no real help since that is about 6 miles from the sea.

I also wonder why Jesus would do the bidding of evil spirits, and ruin a man’s livelihood by drowning all those animals, fouling the water.

So perhaps this was a safe way to flip off the mighty Roman Empire.