Questions about the Bible catching up to science article

Im glad there are science enthusiasts here and also love Christ. So ive recently read an article “No, Bible is not catching up to modern science” by Brad Kramer here on Biologos. https://biologos.org/articles/no-modern-science-is-not-catching-up-to-the-bible/
I have certain queries on that article and posting them here hoping they will possibly be clarified. Certain examples were given from the Bible which contradict science and are considered as just “poetry” by christians.

Kindly read the article and please share your views.

Hi, Annie, welcome to the Forum. I moved your topic to its own thread so it would be more visible and hopefully you would get more interaction on your questions. I will try to come back and throw in my two cents when I have more time later.

Psalm 16:7 - says that our thoughts and emotions come from our kidneys

From the Aramaic Bible in Plain English
I shall bless LORD JEHOVAH who counsels me and my kidneys teach me in the nights.

The Hebrew kilyah is translated kidneys 18 times (the most common usage) according to Strong’s.

From the NET Bible
will you, with him, spread out the clouds, solid as a mirror of molten metal?

The Interlinear I use has:
Have you spread out with Him the skies Strong as a mirror cast metal

I wouldn’t go so far to say these are poetry as much as they are translation choices. Christy, being a professional translator, will have something interesting to add I am sure.

I have been told that if you don’t know the original language using a interlinear or Strong’s will often lead you astray. And you also have to consider the original context. It is better to consult different translations to get a range of opnions. You can find multiple translations on the free site biblehub.com

My kidneys teach me not to have that final cup of tea in the night.

If interested in expounding this line of thought, I really enjoyed this book by Denis Lamoureux: 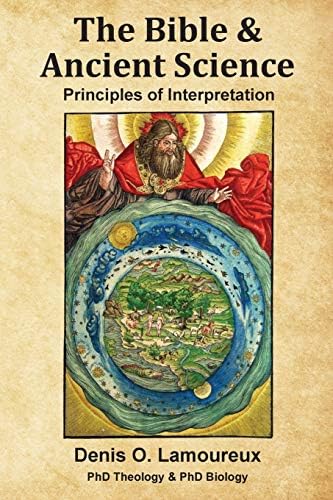 Brad’s article did a great job of discussing some of the apparent contradictions between what the Bible talks about and what we now know from science.
In your post, you mentioned that some of the differences were written off as being “just poetry” and while that is certainly true in some Psalms, I think the story is a bit more involved. Denis’s book discusses how the ancients had many presumptions about how the world worked, their ancient science, that are simply not true as we now know. God was not trying to correct those misconceptions but rather used their knowledge, flawed as it was, about the world to communicate spiritual and theological truth. We know more about the mechanics of how things work now, but also have the capability to understand what God was saying in the context of the time and setting it was written.
Good topic, and good to have your thoughts expressed here, @Annie_Eunice. Any other questions? As the elder George Bush said, *I have opinions of my own — strong opinions — but I don’t always agree with them."

Basically, Christians have two approaches to reconciling science and the meaning of Scripture. One approach called concordism looks for a way to understand a given passage as teaching something true or factual or historical about the natural world. Sometimes this means they insist that the passage is really referring to things that were unknown at the time it was written. For example some old earth creationists think the “firmament” of Genesis is refers to the “fabric of space” and has something to do with the space time continuum, even though only someone with a modern understanding of astrophysics could ever come to that conclusion. Or some creationists take the verses about creatures reproducing after their kind and assume that must mean there are boundaries between species or families that cannot be crossed by adaptation and evolutionary processes. Since the sky is clearly not hard, all references that imply it is are taken to be poetic or purely figurative.

The other approach is called divine accommodation and it assumes that God spoke to the ancient audience of the Bible in the way they could best understand and "accommodated’ their ancient conceptual frameworks for understanding how the world works, even when those frameworks were not scientifically correct. So, God did not correct their understanding of the sky as a solid dome or that men plant seeds in women to make babies or that thoughts and emotions originate in the kidneys.

If you take the concordist approach, you basically have to assume that a lot of descriptive language was purely figurative and not grounded in their actual concepts about how the world worked so the Bible can be made to “concord” with the fact of science. So when passages talk about the windows of heaven being opened to let out the storehouses of snow, that is assumed to be just a figure of speech, not an actual conceptualization of how precipitation works. But if you take the divine accommodation approach, it’s not a problem to admit that the ancients thought the sky was solid and had floodgates to let out the rain. It’s not a figure of speech, the ancients just didn’t have a concept of the atmosphere or water cycle and God accommodated their understanding when communicating, he didn’t teach them modern science.

When you read the Bible in translation, decisions have been made about how to translate idioms and what is literal and what is figurative language, because the point is to communicate the message, not give you a gloss of the Hebrew or Greek. Even when you read Hebrew or Greek lexicons, decisions have been made by scholars removed from the original time and culture about how to translate the words for the lexicon and what semantic range to include in the entries. Translations have to accommodate our own cultural constructs in order to be comprehensible. We have a concept of "mind’ centered in the brain, but that wasn’t the Hebrew concept. Translations try to bridge the gap and get at the intent of the communication.

Which is why we need hermeneutic phenomenology using objective etymology, particularly on words translated like ‘wrath’. I distrust all translation that leads to negative theology.