It’s rare that I recommend YouTube videos, and even rarer that I recommend ones that are an hour long, but I found this one to be exceptional. It’s an in-depth explanation of how evolution works, along with an explanation of how it can be simulated in a computer, and how you can use the basic principles of natural selection and random mutations in conjunction with techniques such as neural networks in your own code to do some pretty impressive stuff.

“I programmed some creatures. They evolved.” 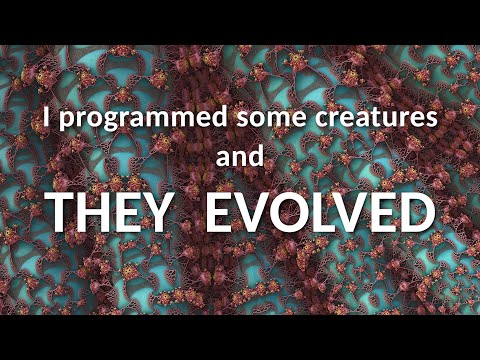 For anyone not patient enough to watch the video right the way through, it generously has timestamps provided in the description. He also includes a link to the source code on GitHub.

There used to be some websites offering very good demonstrations, but those I know best (http://boxcar2d.com/) use Flash and should be used with caution.

I can’t wait to watch this video! @jammycakes are you familiar with the field of synthetic biology?

I’m not familiar with synthetic biology, but as a software developer I am interested in evolutionary algorithms. There are some interesting things that you can do with them.

Oh it’s going to change everything! There’s a lot of ethical and moral ambiguities though. What kind of software development do you do, and have you ever worked with evolutionary algorithms?

@aleocovi Evolutionary algorithms are mostly a side interest for me—something I’m just starting to tinker with in my spare time. Most of the work I do is with enterprise software: I’m currently working in the finance industry but I’ve also worked for the UK Parliament, on their open data platform among other things.

That’s pretty impressive! I used to work as a programmer, for a very very short time - in biomed research. Do you work with a specific language or framework or do you work with whatever’s necessary at any given time? I think programming is a fascinating way to expand one’s mind into how things are built in general, even creatively. It has oddly helped me to forge a deeper connection with God by understanding that reason and logic underlie creation, as a process as well as referring to the created universe.