New Article: What would life beyond Earth mean for Christians?

Today’s new article Deb put together on the possibilities of alien life, and what it would mean for us.

Do you take one of the four stances she mentions at the end?

I will chose door #2. I think if such a situation exists, God would deal with it in a unique way individualized to the situation. We sort of fall into a parallel question when we ask if dogs go to heaven. I don’t think so, yet God cares for dogs, and sparrows and lilies and such, so will handle things in an appropriate manner.

C.S. Lewis gave similar alternatives in his essay, “Religion and Rocketry.” A blogger was kind enough to copy it. I don’t know if there are copyright issues or not. But here is the link:

Religion and Rocketry, by C.S. Lewis

In my time I have heard two quite different arguments against my religion put forward in the name of science. When I was a youngster, people...

Thanks for posting. Lewis amazes. I suppose he was writing this in the late 50’s, early 60’s.

The subject also reminds me of this thread listed a while back of a book that is thought provoking:

I just finished reading “The Sparrow”, a science fiction novel by Mary Doria Russell. It is a treatment of themes of suffering and questions about God that unfold as some Jesuits take it upon themselves to lead a mission to our stellar neighbor, Alpha Centauri to initiate first contact with newly discovered aliens there. [Click to undo spoiler blur.] While I am eager to discuss it with anybody who has read it, I will only give a cautionary recommendation: The story and its characters are g…

Do you take one of the four stances she mentions at the end?

I object to this deplorable tendency in religion to pretend to knowledge which we cannot possibly have.

And I see no reason to presume that any of the categories of our religion need apply to them in any way whatsoever.

Yes, Deb mentions that book in her article!

This reminds me that a couple of times Jerry Coyne asked a question along the lines of “What scientific discovery would make a Christian renounce their faith?” with a background discussion that implied that the answer is nothing; Christians will always either accommodate any scientific finding (by exegetical gymnastics) or simply deny it. I answered that there were two things: 1) Definitive proof of the multiverse and 2) Intelligent aliens. He never allowed my answer to get through moderation.

I gave the same answer to the same question on other blogs-- perhaps Panda’s Thumb was one of them, and I never found acceptance for my answer. Instead I would have non-believers (the resident atheist commenters) arguing that these discoveries would surely not shatter my faith, and offering arguments why I, as a believer, should be resilient in the face of such discoveries. It was a weird dynamic.

Some people do not want to hear an answer to a question when their stereotype/caricature tells them that none should be forthcoming,

David, why would either a multiverse or intelligent aliens make you give up your faith?

I don’t know. I did not acquire my faith through a rational process (although I try to strengthen it through reason) and if I ever lose my faith it would quite possibly be irrational. But to try giving an approximate answer: To me the fine-tuning of our universe is an important prima-facie piece of evidence for God. A multiverse neutralizes that evidence, which is of course part of its appeal to many. And scripture is quite clear, in my opinion, about human exceptionalism. Intelligent aliens would, speaking only for myself, cast serious doubt on that exceptionalism.

I was wondering if you have read Lewis’ Space Trilogy and if that idea of redemption for other races would ever make any cogence to you.

I have not. It always sits just below the cut line. I know that I should, given the number of times it has been recommended.

David, by all means raise Lewis’s trilogy above the cut line. But if you don’t, I think Lewis uses the Lord’s parable of the one lost sheep in regard to intelligent aliens. It could be that all the other races in the universe are not fallen. Only us. If so, God has come to save us, just as the good shepherd would save the one lost sheep.

As to multiple universes: Doesn’t one physical theory say that if our universe is flat, then it would be infinite? But the physical laws and constants would still be fine tuned for life, wouldn’t they? I realize that it wouldn’t be a multiverse, but it would an inifinite universe, all the same.

But now imagine this: You come before the pearly gates of Heaven, and St. Peter stops you for a moment and says, “You’re welcome to enter, but I thought I should warn you that God actually did create a multiverse, just because he likes variety. And there are all sorts of aliens here, too. So if you would rather not enter, the lake of fire is just down that road over there.”

I’m curious which you would choose.

But now imagine this: You come before the pearly gates of Heaven, and St. Peter stops you for a moment and says, “You’re welcome to enter, but I thought I should warn you that God actually did create a multiverse, just because he likes variety. And there are all sorts of aliens here, too. So if you would rather not enter, the lake of fire is just down that road over there.”

I’m curious which you would choose.

I’m hoping heaven. But given your present assurance that finding out there is a multiverse or intelligent aliens would make you lose your faith now, what would prevent it then?

It wouldn’t be a question of faith then, would it?

It would be a question of admitting you were wrong. But if you would be willing to admit that you were wrong, then, perhaps you should re-think your views, now?

My take on this topic is probably the most controversial. I know that many Christian astronomers and astrophysicists including Deb, and Jennifer Wiseman are (justifiably) intrigued and excited by the large number of exoplanets being discovered. As a biologist I am less impressed. I think the chances of us ever being in contact with another intelligent sentient alien race are vanishingly small, for purely scientific reasons. (some of which have been published in books like Rare Earth, Improbably Planet, and elsewhere). So I dont spend much effort thinking about the theological implications for something I think is highly unlikely.

I should probably apologize to the human race in advance for posting that comment. I have a terrible history of making pronouncements that are proven false shortly thereafter. So, I suppose we might expect the alien invasion to start by the weekend at the latest.

I have read other things on this topic elsewhere and when thinking about if have tended to go with the “multiple incarnations” theory.

Our scriptures and developed Christian theology in the church was for us from God for God’s relationship to the earth and tells us little of what is far away. If Intelligent ET does exist we need a whole new way of looking at a Cosmic salvation and the potential salvation needs of ET.

If ET grew up perfect then they would not need salvation but the potential as free willed beings is that they to would rebel against their creator an hence be sinners in need of salvation.

God could deal with them differently to us but some Orthodox-Catholic (and Protestant) theology holds the principle of the incarnation that “what is not assumed by the Word cannot be saved” by the Word. The Word becomes “us” for us and hence the Word would assume the nature of ET to save ET.

The Word is part iof the infinite God and while joined to the humanity of Christ in the Incarnation ever remains the Word. It is the Word (along with the activity of the Holy Spirit< also infinite) that is the principle of Mediation and Cosmic salvation. Althougth there could be muliple “Christs” (one on each planet) in effect the multiple incarnations would all be the same and single act of God Incarnate and part of a singular salvation throughout the universe because of the singuar Word. There is nothing to stop the Word being joined to any number of “flesh”, and yet it all being One act of mediation and salvation.

A couple weeks ago, I attended my first Realm Makers conference with 350 attendees. It is a Christian speculative fiction writers group. Speculative fiction, I learned not so long ago, is the umbrella term for science fiction, fantasy, paranormal, and horror (still wrapping my head around “Christian horror”). I learned there are far more books out there that deal with things like aliens within a Christian worldview than one would ever guess from a typical internet search. (A mix of Indie and traditional published.) If anyone is interested in seeing my own fictional account of an alien race interacting with Christians, the first book in a trilogy is Shadows of the End (Kindle version is only $0.99). 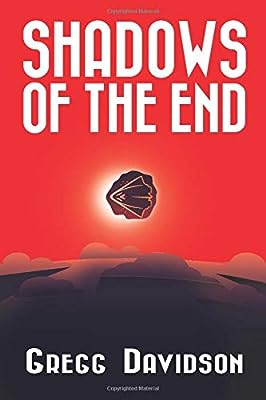 Shadows of the End: The Mulapin Trilogy, Book 1