Is religion for God or for man?

In the thread “the choices we make” I just posted the outrageous suggestion that the crucifixion was only necessary so that we could forgive ourselves. Because God will forgive us anyway and the notion of perfection is a standard raised by man and not God.

Taking this thought to its conclusion we are left with the idea that religion is not for God’s benefit at all!

If Religion was just about worship then perhaps we could justify it as being Godly but it is not. Religion always comes with Modes of conduct, sacrifices and other Godly ideals that, although have good intents result in restrictions and shackles and loss of one freedom or another… You cannot do that, or you must do this!

Why did the Old Testament prophets claim that sacrifices were not acceptable? Because of what they were or because of why they were being performed?

The Pharisees were the epitome of the human ideal of obeying God, but Jesus criticised them for not being human. IOW it was the concept that was at fault.

So perhaps I am not so much a Universalist as a sceptic. Religion is fine, until it starts getting self righteous and believing that it is the religion and not God that saves. What matters is not what we believe, or what rituals and practices we attach to those beliefs, only how it manifests in the rest of our lives. If religion is a positive influence then all for the good, but when religion starts trying to dictate or condemn those who do not agree with the set of beliefs… it loses itself and its reason for being.

Religion should be for God, but in reality it becomes a platform for man to laud it over others.

What do you think of this? 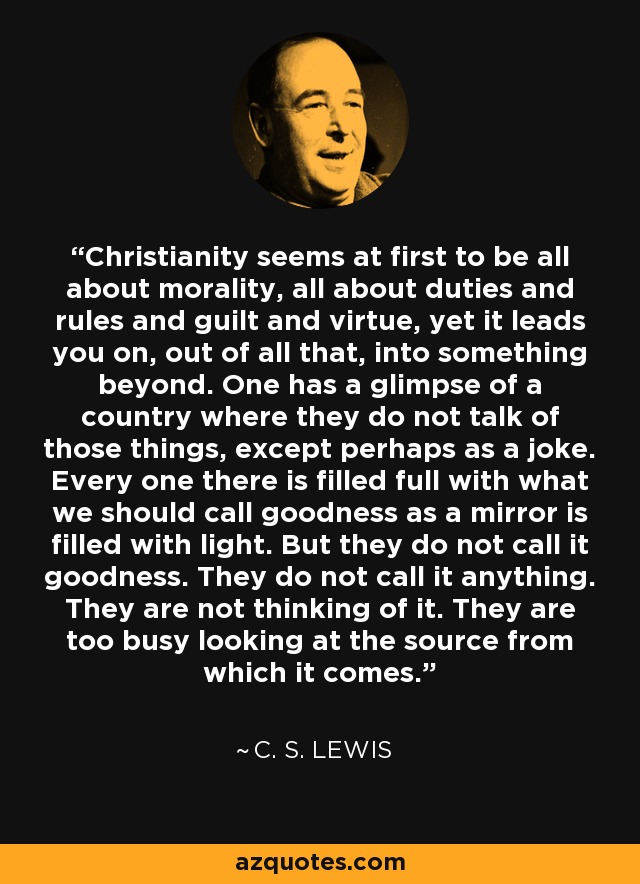 Christianity seems at first to be all about morality, all about duties and rules and guilt and virtue, yet it leads you on, out of all that, into something beyond. One has a glimpse of a country where they do not talk of those things, except perhaps...

I think that is just a part of it…

It is also about our attitudes to those who do not think as we do. Who can manage to live without the beliefs that we do and yet…

That sounds a bit like George Macdonald in “The Boyhood of Ranald Bannerman,” in which the pastor father of Ranald says that our first duty to God is to do the job at hand of serving our fellow man…and that anything, even prayer or reading the Bible, that detracts from it, is so much pagan devotion that is self directed. I think there would be an exception in that we all need our time alone with God in the wilderness, but the point of potential idolatry is understood. One of my favorite books from my favorite author.

Which is where Romans 14 come into play. We live by our own standards and rules but cannot expect others to conform to them also. Within those rules will be our devotions and respect for God. I guess it is hard to see others break those standards without making some sort of reaction, yet that is what I see Romans 14 as telling me not to do.

Which is where Romans 14 come into play. We live by our own standards and rules but cannot expect others to conform to them also.

Well, I think that I see what you’re saying; but I think that while there’s a role for humility here, as you say, there’s also a uniqueness from the Bible that eventually is a good thing. We’re all starting from where we are; as the Victorians said, doing the best “according our lights.” However, similar to Lewis’ image in “The Last Battle” and “The Great Divorce,” it’s incumbent on us to “go farther up and farther in.” God’s happy with ever effort we make, but it’s in serving each other and reading the Bible with meditation–a combination–that we mature (I’m not sure what that is like, completely; while I am happier to be a married father, at some point as a teen, I thought being a Franciscan friar would have been great, too!) What do you think?

I think that Christians refuse to accept that there is any alternative to the bible as either a guide, or even a starting point, let alone ignoring it altogether.

I guess that we cannot conceive that the bible could just be blowing its own trumpet. But, what else can it do?

I guess that we cannot conceive that the bible could just be blowing its own trumpet. But, what else can it do?

It could be the collection of testimonies that are blowing Christ’s trumpet - calling us to come to Him.

It is. But that is not the point. The point is whether God saves or Christianity? And whether we can tell the difference.

Christ demonstrated the grace of God. Christianity wants that grace for itself, and itself alone.

I wonder what God really wants?

Romans 14 is not about morality. It’s about personal convictions as a second layer to morality. Romans 14 means if you feel guilty for eating meat then don’t do it. It does not mean I’d you feel ok with rape that it’s not a sin.

Religion is for men. It’s Gods way of showing us how to live. As Christians our standard is the world of God. It can be interpreted numerous ways but some things are pretty black and white clear cut. It condemns universalism and that all will be saved.

So God saves. However God chooses who he has mercy and compassion on.

Scripture says it’s though Christ. Christ tells us how to make someone a disciple and add them to the body of believers so that they may be grafted into the tree of life and not swept up to be burned.

Christianity is not a man made thing. It’s God. It’s the words And teachings of God for mankind.

I think that is the country where I was meant to live. The best part would be sleeping in on Sunday knowing full well the sun will be shining just as sweetly when I awake.

It is. But that is not the point. The point is whether God saves or Christianity?

Well, nobody is going to argue against the proposition that “God saves.”

So the question then follows: what does the arm of God’s salvation look like? On the Christian view this salvation is in the person of Christ. Again, I’m guessing that (at least among Christians here) there would be little argument over that either. So we already have rejected the notion that an argument about whether it is God or Christ that saves is a silly one, and that the answer is both. Christ is God’s salvation to and for us. So more questions then further follow … through what means does Christ save us … and do those means include that collection of testimonies we call “the bible”? Here many may balk (and rightly so) at any statements that “the bible saves” or “religion saves” or “Christianity saves” - and not least because the bible itself warns us away from such idolatry (John 5:39). But to try to pit all these things against each other as if God / Christ could not use them to reach the lost is to fall to the same false binary exclusivism that would attempt to force us to choose between two things. They need not be equal things; I doubt anyone here would hold up religion or Christianity as being as important as God. But just as we reject the falsely imposed choice: “Do you believe in God or in Christ?”, so we should also reject the notion that God does not use such things as Christianity (or even religion in general) for God’s purposes.

As to whether Christianity can rightly claim to be sole proprietor of all truth and grace, I certainly reject that notion, and fully agree with you that God is not thus limited.

Religion is for men.

Ah, a rare example of a situation in which women get the better deal.

Ah, a rare example of a situation in which women get the better deal.

Shame on you, Stephen!

And you are certain that includes you? Why? Because you are a Christian perhaps?
“Not all those who cry Lord, Lord”

Strikes me that Christianity can be the height of vanity.

And as such it loses its integrity.

Christians need to remember who they are, and who God is. And not mix them up!

Christianity is not a man made thing. It’s God.

And this is where I bow out and distance myself from certain factions of Christianity.

When man claims to be God, in any shape or form, then he is not reading the same Scriptures that I am.

It’s not about religion, it’s about family.