I have a few friends who are completely caught up in the End Times frenzy that has resulted because of COVID-19. One of the claims is that Bill Gates is pushing for a vaccination with a chip - and this is somehow a fulfillment of Revelation 13 and the Mark of the Beast. To me its all crazy, but I’m curious to know why and where this idea about Bill Gates is coming from? Any validity to him wanting a vaccination with a tracking chip?

No idea. But there is no reason to believe a chip is the mark. The mark was the name of man and most likely it was some kind of tattoo.

One of the claims is that Bill Gates is pushing for a vaccination with a chip - and this is somehow a fulfillment of Revelation 13 and the Mark of the Beast. To me its all crazy, but I’m curious to know why and where this idea about Bill Gates is coming from?

I think that some people think that Bill Gates is behind some conspiracy because they don’t understand epidemiology and are wholly ignorant of the field. So when Bill Gates makes a Ted Talk in 2015 or something, they don’t realize that it’s because we understand epidemiology and one of the best ways to help stop a virus is a vaccine. Here’s his 2015 talk:

Tell them that if this is the end, then Trump is the Antichrist. That’ll end the discussion.

[Self-censure by moderator who should know better.]

[for the sake of later readers … every word of the above was sarcasm. ]

I agree, at this point I’m just interested to know if this vaccination (with some kind of tracking device) is even true

Yes, I’ve seen this TedTalk - I was impressed with him!

I agree, at this point I’m just interested to know if this vaccination (with some kind of tracking device) is even true

Gates is giving money to finance the search for a vaccine. Multiple companies are attempting to develop a vaccine. Are all of them in on this secret tracking device? Are all the scientists working on the vaccine somehow unaware of the tracking device, or are they part of Gates’ conspiracy?

Honestly, I don’t think it’s possible to talk people out of such crazy ideas. No one yet has been able to convince Ken Ham the world is more than 6000 years old.

One of the claims is that Bill Gates is pushing for a vaccination with a chip - and this is somehow a fulfillment of Revelation 13 and the Mark of the Beast.

This probably comes from reading the Left Behind series. In those books, the mark of the beast was an implanted chip in the forehead or hand with something tattooed over it. The series may be thrift store fodder now, but it was read by millions of people (and maybe that idea didn’t start there, but it certainly helped to popularize it).

[Content self-censured by moderator who should know better … yeah I know you all enjoy it in the intended spirit - but in this day and age where parody can be so confused or even deliberately misused - I thought better of it. I had my fun - but my better angels now prevail.]

So much quote mineable material; so little time… To the smear campaign bus!

This probably comes from reading the Left Behind series.

I’ll try not to get too far into politics, but since this idea is connected by @Chrisloewen to Revelation 13, I’ll summarize Greg Beale’s commentary on that chapter:

As Jesus warned in his Olivet Discourse and John warned in his letters, the spirit of Antichrist has manifested often since the first century. In Revelation 13, the dragon (Satan), the beast from the sea (Antichrist), and the beast from the earth (the false prophet) are depicted as a parody and counterfeit of the Triune God – Father, Son, and Holy Spirit. The worldwide religion they promote is a counterfeit Christianity that replaces worship of God with idolatrous worship of the state. The Beast, as head of the state, is worshiped in place of Christ, and the false prophet, as his religious ally, deceives the saints and promotes such worship through economic means (greed).

I’ll leave it there.

Wow, if they think a chip would be required they must worry that supernatural options will lose potency. Has anyone told God?

I know that in some refugee camps and homeless populations groups have been exploring using biometrics to link to medical info and id stuff because displaced people don’t always have their documents in order and they are crossing international borders.

Here is an article that has info that might be what you are looking for: 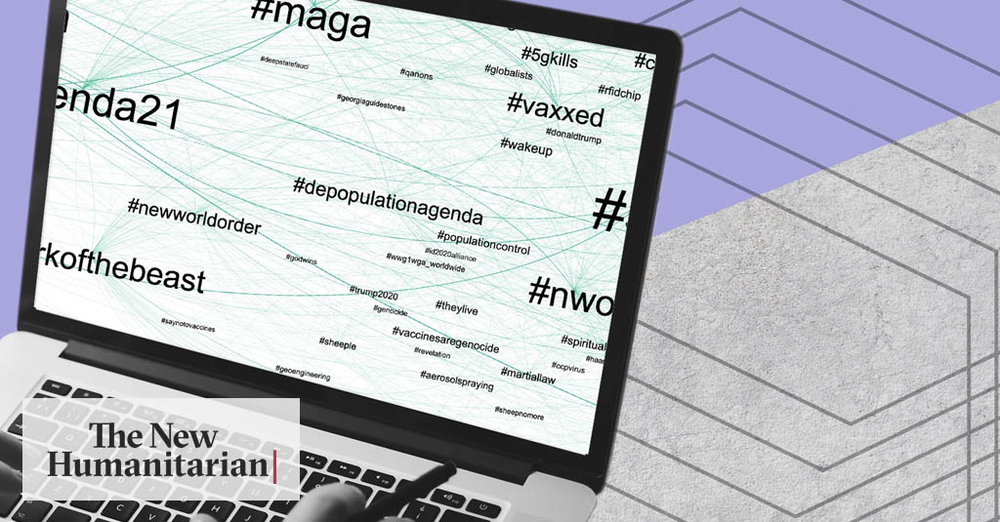 Bill Gates does not have a secret plan to tag you

The scale and speed of a 'vortex' of COVID-19 misinformation swept up a small nonprofit.

ETA: As someone who is involved in development work with an organization that partners with UNESCO and the UN in various countries, I heard about this in the context of humanitarian aid, not conspiracy theories. The motivation for developing the tech was giving vulnerable populations access to the rights and benefits that come from having official identity records and medical information stored digitally and linked to something that cannot be lost or stolen. It has nothing to do with commerce, one world government, or tracking people. In addition to the coronavirus crisis, we are in the middle of a refugee crisis of unprecedented proportions. There are 70.8 million forcibly displaced people in the world today.

I guess this same conspiracy thinking had someone on my friend list post how he would not trust a vaccination from Bill gates, and a dozen others chimed in with support. I found that strange that they would vilify someone who has done more to fight malaria and other disease in underdeveloped countries that any other individual I know.

I tried to cut back on social media today, as it is so discouraging and depressing to read so many false and bizarre comments from people I thought were intelligent and reasonable. Sort of makes me ready for little rapture action myself. Scotty, beam me up, no sign of intelligent life here.

I know the feeling. Sounds like Ed Stetzer’s getting pretty disgusted with it all too.

On Christians Spreading Corona Conspiracies: Gullibility is not a Spiritual Gift

As followers of Jesus, we are people of the truth. Falling for (and spreading) conspiracy theories does not honor the Lord, but it does cause people to question our judgement.

For one if people would notice two things about the Mark of the Beast. 666 leads to a name and that name is Nero Creaser and though I do believe it does relate to this past individual, it is possible that it also is a warning of a future individual who might be like Nero (I have taken a balanced view that Revelation points to things both past and future. Basically a modified form of Historicism to a degree) and also the Mark of the Beast seems to be more of an economic tool rather then a biological device. Quote from Rev. 13:16-17, “And he causes all, the small and the great, the rich and the poor, and the free men and the slaves, to be given a mark on their right hand or on their forehead, and he provides that no one will be able to buy or sell, except the one who has the mark, either the name of the beast or the number of his name.” The using of the phrase “on their right hand or on their forehead” was places of vowing was made so it seems to be a system of allegiance based on economics.

I have come across an example of this today and my first thought was that here was an example of the anti-vaccination movement coming up with another conspiracy theory. However, the people involved were the same ones who were easily sucked in to the idea that the up-and-coming (as it then was) lunar eclipse and the “blood red” color of the Moon was a sign of the end times. They went quiet when it did not eventuate.

I think there is another element at play that results in people repressing their doubts, whether the conspiracy be about vaccination or “the deep state”. The element is psychological and is about the need to belong. Confessing the elements of the conspiracy theory gives one instant acceptance in the group. Belonging to a group usually trumps facing the facts.

The strategy for dealing with this would not be to call the conspiracy bearer an idiot. That only reinforces their sense of non-acceptance. Rather it would be to make them feel totally accepted, despite their views, and gradually help them to see that they are free to reject the theory without losing acceptance by the group. Of course, I wouldn’t be adverse to occasionally dropping a clue to help them reason it out for themselves.

The element is psychological and is about the need to belong. Confessing the elements of the conspiracy theory gives one instant acceptance in the group. Belonging to a group usually trumps facing the facts.

That’s a good point. We all feel a need to belong and I think there are a lot of ways that we sometimes gain that belonging by having something else to fight against.

Ah yes! “Unite against the foe!” Was it Herman Goering at the Nuremburg War Trials who was asked how they managed to persuade a German farmer to become a soldier in a war when the best the farmer could hope for was to return safely to his farm? Goering said it was easy. All you had to do was convince him that Germans were under attack and he would readily answer the call. So Germans in Poland were attacked, (probably engineered by the NAZIs themselves), and Germany invaded Poland. The same formula seems to work again and again in different times and places.