What is your bias?

Ran across this website, and found it interesting and well set up. 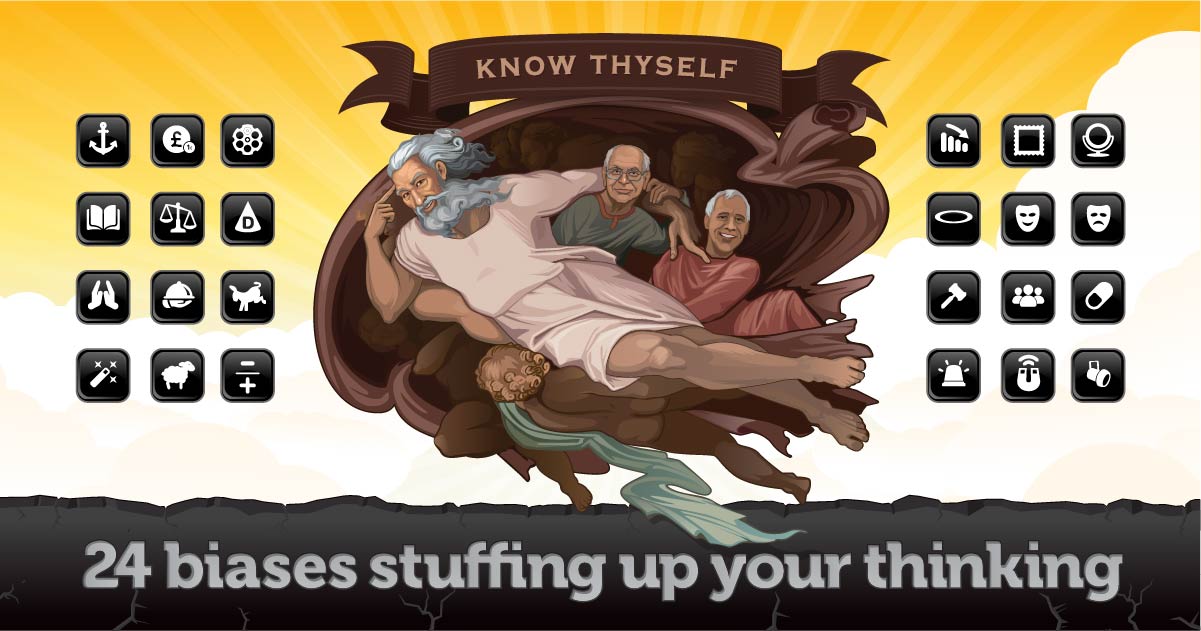 24 biases stuffing up your thinking

Cognitive biases make our judgments irrational. This website helps you identify some of the most common biases and how to avoid falling victim to them.

One criticism is that they just mention one half of the Dunner- Kruger effect. Overall, the “curse of knowledge” is one of my biggest faults,as I just cannot believe that some people seriously believe what say they do, at times.
As I say that, I realize it sounds like someone saying their best attribute is their tremendous humility, but oh well.
What is your blind spot?

I felt going in it was “confirmation bias” and, after reading all the possibilities, I’m now certain that’s my blind spot.

Ha! An appropriate answer to an inanswerable question.

Cool site! The setup reminds me a lot of the What’s your logical fallacy site… I wonder if it’s by the same people.

I thought the “reactance” one was interesting – I hadn’t heard that term before. Probably we all went through some of that as teenagers, but I have to watch out for that one when processing anything that certain well-known YEC speakers say.

(as in, “I already know that much of what this person says is wrong, so this must be too”)

I deal with the “sunk cost fallacy” a lot too… I’m that person who will eat an entire meal I don’t like because I paid good money for it, dang it!

I probably am a victim of the Dunning-Kruger effect.
That is a bit like my favorite brag-- “I only made one mistake in my life–I thought I was wrong once.”

The ones that resonated the most were the framing effect (unduly influenced by context and delivery) and the halo effect (how much you like someone influences your other judgments of them).

When we had to do all sorts of personality, cognitive style, and learning style tests in various education classes and cross-cultural communication classes I’ve taken, I always score much more field-dependent than is typical for someone who was relatively successful in a Western education system. And I’m probably more “right-brained” and extroverted than the average person here or in my linguistics nerd world.

Conversing with people new to this subject, especially the more ardent ones. When I hear a rookie mistake in a field I know a bit in, I tend to try to overexplain and the point goes right over their heads and they continue making the rookie mistake to my frustration. I need to work on articulating myself in a simpler way.

I was just about to bring the framing effect too, and Christy beat me to it above. But my reaction is a complaint, actually. I was thinking to myself how great and productive this web site would be to suggest to some of my students to peruse through at school. But then I note the accompanying video promotional at the bottom.

Now I have second thoughts about sharing this too widely in my own politically conservative environs here, that includes a fair number of Trump supporters. The message they would see is unmistakable: The brain, progress, technology --is all on the ‘left’ or ‘blue’ side (and why bother placing the ‘critical thinking’ caption in the middle as if there was any doubt – just make it blue and put it on the left); while the red side showing the mouthy Trump obviously gets the ‘Post Truth’ label.

Even if this political caricature had truth in it (which I do not completely contest, but yet … I do because I know so many people smarter than I am who did and do have their reasons for supporting Trump despite all the things about him they don’t like) … I still am disappointed at such a self-inflicted wound that an otherwise stellar site (and good video, by the way!) irrationally imposes on itself by shutting out such a major portion of its audience – the very audience in fact that it fancied itself as ostensibly needing to reach. Trump supporters in this country are already feeling defensive about so many things, that any little cues towards liberal intellectual elitism is probably going to be the new micro-aggression to which they have developed hyper-sensitivity.

I’ll probably still find a way to present this stuff … but would still have to apologize for the blaringly out-of-place political posturing that mars and impedes a needed message.

There I’m done with my longish screed. Dunning Kruger anyone?

Okay --I’m sorry (partially) about last night’s whine-fest above --and hate to potentially poison this productive thread on such a sour note. As penance, I’ll raise this hopefully more productive (but still critical --in the spirit of the site, right?) question for further discussion possibilities.

Under the ‘just-world hypothesis’ bias the following description is given:

A world in which people don’t always get what they deserve, hard work doesn’t always pay off, and injustice happens is an uncomfortable one that threatens our preferred narrative. However, it is also the reality. This bias is often manifest in ideas such as ‘what goes around comes around’ or an expectation of ‘karmic balance’, and can also lead to blaming victims of crime and circumstance.

I think it may be a bit unfair or a failure of skepticism to label a so-called ‘just’ world as a non-reality, but then in the same breath bestow the label of ‘unjust’ world as a blanket reality that must be accepted. None of us (believers or nonbelievers alike) likes injustice as is acknowledged by the necessity of pointing out this bias. Where we will disagree is over whether justice exists objectively apart from humanity or whether is only a creation of ours. But I think we can set aside that disagreement to agree that no matter who created the concept … it does exist, is applied (even if only with dismally partial success), and is critically important.

“What goes around, comes around” does not always have to be meant as some final descriptive word about all reality (though the believer can certainly see and include such a meaning in it); but it can also be valued as an ethical instruction or warning. Much like recognizing that when we speak lies, those lies often come back to haunt us. Are we irrational to inculcate such preferences and warnings toward justice in our children and those around us? I strongly suggest not. So I would nominate this particular bias, as it is proposed as being a very dangerously close to an endorsement of nihilism of the very sort that the creators of the site would not want to promote.

Added edit:
Perhaps an example of the flip side of this ‘just-world’ bias could be how people in the era of Grimm’s fairy tales thought of the world. They probably could not be accused of thinking the world to be a rosy place. Hence children are treated to tales of cannibalistic witches haunting the woods or other monsters lurking behind every rock. The stories were not entirely irrational as we can easily imagine the intent to inculcate a healthy, and self-preserving fear of dangers in young listeners. But I do think that we could / should match the ‘just-world hypothesis’ bias with an ‘un-just world’ bias to which we are at least as susceptible. E.g. whenever fear-manipulated people scurry away to stock up on more weapons and ammo, they are not in any way thinking the world to be a just place. They are investing not in any good or enlightened future for their children but instead in a perversely hoped-for apocalypse and personal survival at the expense of their neighbors. I propose that the ‘unjust’ or perhaps ‘nihilistic’ world hypothesis should be one of the biases that ought to heavily concern us all today if we care about our children.

I propose that the ‘unjust’ or perhaps ‘nihilistic’ world hypothesis should be one of the biases that ought to heavily concern us all today if we care about our children.

They mentioned the ‘declinism’ bias, where you assume that the world is just getting worse all the time. This is something I notice, especially among Christians, which I find ironic. It seems to fly in the face of the idea that if God’s kingdom is really coming, then some things are becoming more just and more peaceful. And in actuality they are. In many places of the world justice is increasing for women, children, and formerly ostracized groups, health and sanitation is improving, people are taking more and more responsibility for proactively addressing injustices. But maybe that is just an optimism bias of mine.

I really like … and prefer your optimism bias! As long as you know you have it, right?

My bias favors people who appear to be civilized, clean, employed . . . and East Asians who are at least statistically more civilized than white people. Sometimes I am fooled.