What is evidence that Covid came from nature and not out of a lab?

I agree. Nevertheless, she is credible and this is evidence for a lab origin or of the virus. She claims to have more evidence supporting its origin from a Chinese lab. So we will see.

We can speculate on her motivation for her statements, but that’s really just speculation just as why would anyone release this virus on purpose? or why did some US scientist come out saying not possible this virus came from a lab.

It seems to me that the non scientific reason (scientific has been listed in other threads, including genetic analysis, common nature to human jumps, etc) would be to quash the wild accusations both Chinese and Americans (as well as others) made at each other of evil intent. It is the sin of Cain, isn’t it, to blame someone else for things that we have to adapt to?

There is very good evidence it was not from a lab. Thank goodness for those who tried to put water on the fire others were trying to stir up. Thanks.

Now this is on many media sites, with people debunking the claims in her paper.

Another piece of coronavirus misinformation is making the rounds. Here’s how to sift through the muck.

Here are some quotes from the National Geographic article:

Prominent virologists, such as Kristian Andersen from Scripps Research and Carl Bergstrom from University of Washington, took to the internet and called out the paper for being unscientific. Chief among their complaints was that the report ignored the vast body of published literature regarding what is known about how coronaviruses circulate in wild animal populations and the tendency to spill over into humans, including recent publications about the origins of SARS-CoV-2.
The experts also pointed out that the report whipped up wild conspiracy theories and wrongly accused academic journals of plotting with conspirators by censoring important evidence.
In July, David Robertson, a viral genomics researcher at University of Glasgow, authored a peer-reviewed paper in Nature Medicine that showed the lineage behind SARS-CoV-2 and its closest known ancestor, a virus called RaTG13, have been circulating in bat populations for decades. Virologists think this relative, which is 96-percent identical to the novel coronavirus, probably propagated and evolved in bats or human hosts and then went undetected for about 20 years before adapting its current form and causing the ongoing pandemic.
The Yan report claims this hypothesis is controversial, and that RaTG13 was also engineered in a lab. But that flies in the face of the overwhelming body of genetic evidence published about SARS-CoV-2 and its progenitors. What’s more, the report was funded by the Rule of Law Society, a nonprofit organization founded by former chief White House strategist Steve Bannon, who has since been arrested for fraud. That’s yet another reason many virologists are questioning the veracity of its claims.
“It’s encroaching on pseudoscience, really,” says Robertson. “This paper just cherry-picked a couple of examples, excluded evidence, and came up with a ridiculous scenario.”

What does the Yan report say?
The Yan report attempts to tackle this question in a different way, starting with the murky claim that SARS-CoV-2 is bad at infecting bats, therefore it could not have come from them. But scientists point out that viruses are constantly evolving and passing between species. The initial spillover from bats to humans could have happened decades ago, allowing the virus ample time for its spike protein, the part it uses to enter cells, to optimize through natural selection to infect humans.
Another argument made by the Yan report centers on the presence of a “furin-cleavage site” on the spike protein, a critical genetic feature that is thought to enhance the virus’s ability to enter cells. The report claims this feature is found on no other coronavirus and therefore must be engineered. But this statement contradicts findings: similar cleavage sites are found on bat coronaviruses in wild populations.
“I’m going to scream if I have to explain the fact that many viruses have cleavage sites,” says Angela Rasmussen, a virologist at Columbia University.
The report also asserts that SARS-CoV-2 is “suspiciously” similar to two strains of bat coronaviruses, called ZC45 and ZXC21, that were discovered by scientists at military labs in China. The authors claim these strains could have been used as a template to clone a deadlier virus. But other scientists balk at this idea.
First, the two strains differ by as much as 3,500 nucleotide base pairs, the chemical “letters” used in genetic code. As such, they would be a poor starting point for bioengineering SARS-CoV-2. Engineering a virus in which you had to replace more than 10 percent of its genome is inefficient, if not impossible, according to Rasmussen and several other virologists. The fact that these strains were identified at a Chinese military lab is also “just circumstantial,” says Robertson. The bat coronaviruses were circulating in wild bats and could have been discovered by anyone.
The report also argues that SARS-CoV-2 has “restriction-enzyme sites,” or genetic sequences that can be cut and manipulated by enzymes. These genomic features are sometimes used in cloning, and the report claims their presence is indicative of an engineered virus. But scientists point out these sites naturally occur in all types of genomes, from bacteria to humans.
“It looks legitimate because they use a lot of technical jargon. But in reality, a lot of what they’re saying doesn’t really make any sense,” says Rasmussen. She adds that the type of cloning that uses restriction enzymes is very outdated, and so it is unlikely to be used to make a viral bioweapon. And on a basic level, making an engineered virus is not a trivial matter. Scientists are still just trying to understand the molecular and genetic reasons why some viruses are more infectious than others. Adding features to a virus to make it more transmissible, for example, is called gain-of-function research. It is highly controversial for its potential to make bioweapons and was even banned in the U.S. for a time, limiting the data available on how it works.

Thank you thank you!

Thanks, Michelle. It’s always a fine line here between allowing people to bring up claims to have them fact checked and providing a platform for the promotion and spread conspiracy theories. It is knowledgeable people like you who keep us more toward the former than the latter, and I appreciate your expertise in this conversation.

Any idea what a “Chinese military lab” is? The mind goes many different directions reading something like this.

Any idea what a “Chinese military lab” is? The mind goes many different directions reading something like this.

Just the fact that they were publicly identified at a military lab is pretty good evidence that they weren’t being experimented on as bioweapons. Why on earth would any military give out that kind of information?

I don’t disagree with you, but my question still stands. I’m just trying to ascertain what “Chinese military lab” is. What would their purpose, mission or vision be? I have never heard of one, and based upon what I would otherwise guess, I would imagine that they would be secret installations not publicly mentioned. Have you ever heard of them or know anything about them (or it?)

I’d tell you but it’s eyes only and I’d have to kill you if I did.

Is it worth it to hear??

It depends how badly you want to get Home.

I don’t disagree with you, but my question still stands. I’m just trying to ascertain what “Chinese military lab” is. What would their purpose, mission or vision be?

I don’t know anything about Chinese military labs. I do know that the US military does plenty of perfectly ordinary infectious disease research (USAMRIID).

It’s well known that the Chinese PLA were working with Baric and other US researchers on the gain of function studies creating SARS like chimera viruses.

A palindromic RNA sequence as a common breakpoint contributor to copy-choice...

Much remains unknown concerning the origin of the novel pandemic coronavirus that has raged across the globe since emerging in Wuhan of Hubei province, near the center of the People’s Republic of China, in December of 2019. All current members of the... 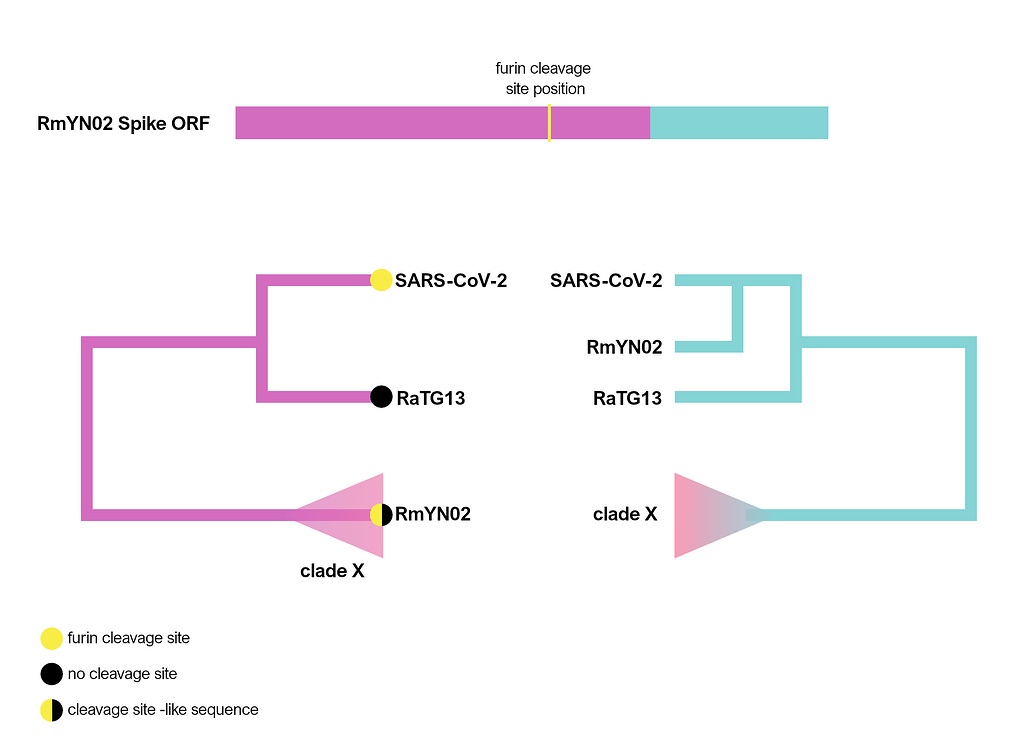 Sequencing the SARS-CoV-2 genome has massively aided the effort to understand and contribute to the control of the COVID-19 pandemic, through comparative genetics and molecular epidemiology. However, due to the very limited sampling of closely...

This furin cleavage in Covid 19 is highly advantageous to the virus making it a stronger binder of human Ace 2 and increasing its lethality.

And if the virus were more lethal, with more overt symptoms in all infected people, it would not have become a global pandemic so quickly, because it would have been easier to quarantine affected individuals to prevent wider spread.