What about embodied cognition?

New post to discuss the question that is posed,"How do you fit embodied cognition in to this?

Thanks for your moment of sanity in all this. I’ll respond more later, but had a question…

Incidentally, while we’re on the topic, I find it curious that the premiere organization of Christian field linguists, SIL International, leans largely non-Chomskian (with some exceptions). One might expect an organization with an American Evangelical base to lean toward the theoretical framework that resonates with ID… yet it doesn’t. And, ironically, it takes a fair amount of flak for that by Chomskian linguists in the secular academy. Quite a bit of irony there!

How do you fit embodied cognition in to this? The emerging viewpoint of embodied cognition holds that cognitive processes are deeply rooted in the body’s interactions with the world. This position actually houses a number of distinct claims,... 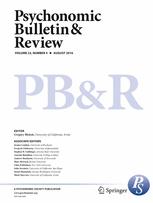 The poverty of embodied cognition

In recent years, there has been rapidly growing interest in embodied cognition, a multifaceted theoretical proposition that (1) cognitive processes are influenced by the body, (2) cognition exists in...

I seem some large strengths of this view, as embodiment may be a precondition for theory of mind and for language. Where does this sit in relationship to Chomsky, who seems to be presenting a more abstract view of cognition?

A post was merged into an existing topic: Adam, Eve and Population Genetics: A Reply to Dr. Richard Buggs (Part 1)

Hopefully by dividing this post things can stay more on topic and advance with a better tone.

Hi @jpm - Appreciate the moderation. Please note that my post should not have been moved, as it has nothing to do with embodied cognition and everything to do with the language origin/evolution discussion. Thanks!

Done- I hope. Will be a little out of sequence. Thank you for your patience.

I find it interesting that an offhand and correct comment calling Chomsky a giant of the field (as he absolutely is) led to a torrent of correction, as if I endorsed all of his ideas. That, I find, to be really remarkable. Can you explain it to me?

The irony here is that I am actually, in my professional work, sharply critical of Chomsky’s approach to language. His approach underlied what I see as the largely failed effort of AI in the 60s, 70’s and 80’s, which might be finally coming to an end with IBM Watson. In its place, the statistical approaches like (HMM, deep learning, LSI, latent semantic indexing) are actually where my professional expertise is in, and where we have been able to apply these approaches both to text, and also to biology.

And on a philosophical level, I am much more drawn to embodied cognition, as it is seem more coherent with the Incarnation, explains why the early AI projects failed, and also creates some of the most believable conceptions of how strong AI could arise (see Westworld), if it is at all possible.

None of that, however, detracts from Chomsky being a true giant in the field. Recognizing that does not mean I agree with his conception of everything. For the conversations we have had, however, none of his failings detract from the point. How does recognizing this make me a Chomsky devotee, and uninformed about the field?

Chomsky famously has refused to acknowledge any value in probabilistic language models. Meanwhile, Google Translate and Bing Translate use them to great effect.

EDIT: iirc, Alexa is more accurate in listening to and transcribing language on the fly than the average adult. And probabilistic models are behind that capability, of course.

I find it interesting that an offhand and correct comment calling Chompsky a giant of the field (as he absolutely is) led to a torrent of correction, as if I endorsed all of his ideas. That, I find, to be really remarkable. Can you explain it to me? Avram Noam Chomsky (born December 7, 1928) is an American linguist, philosopher, cognitive scientist, historian, social critic, and political activist. Sometimes described as "the father of modern linguistics," Chomsky is also a major figure in analytic philosophy and one of the founders of the field of cognitive science. He holds a joint appointment as Institute Professor Emeritus at the Massachusetts Institute of Technology (MIT) and laureate professor at the University of Arizona, and Born to...

Never was good as spelling =).

Sorry, apparently I read a typo into your comment there too =).