"The Problem of The Now"

Thanks for this. I’m not sure how useful a mathematical/physics model for now would be. Doesn’t it seem that now is essentially an aspect of being, especially one with self awareness and the capacity to represent past events as well as to imagine future ones? Both “here” and “now” are floating reference points in space and time for the one doing the experiencing, and some times the representing or imagining. My immediate thought is what purpose would something like this serve in physics? But then all modeling is essentially ours and time and location often are salient. My other thought is about the way the presence of an observer effects observations. Finally, if God is thought of as being eternal and everywhere, do here and now have any meaning from a divine POV?

Both “here” and “now” are floating reference points in space and time for the one doing the experiencing, and some times the representing or imagining.

I thought mainstream science says there’s, technically, no such thing as space and time for the “here” and “now” to float around in, … just “spacetime” fabric which has plenty of moving parts as it is.

My immediate thought is what purpose would something like this serve in physics?

Finally, if God is thought of as being eternal and everywhere, do here and now have any meaning from a divine POV

Omni-temporality would be a false doctrine maybe???
And wouldn’t Heaven be just one big “here” and “now”?

How does so-called “absolute” time and space work in other universes with respect to ours, and of course, with God?

(Hey Mitch @mitchellmckain, you may want to weigh in on this since both you and I reject the idea of absolute time.)

And then there is the little issue that spacetime can be warped.

God isn’t omnitemporal as the past is dead and the future hasn’t lived.

In conventional thinking. We, of course, are limited to the now, but God isn’t.

This was referenced elsewhere here recently – did you watch it, perchance (maybe you can’t in the UK?)?:

The Illusion of Time (it’s under ten minutes) 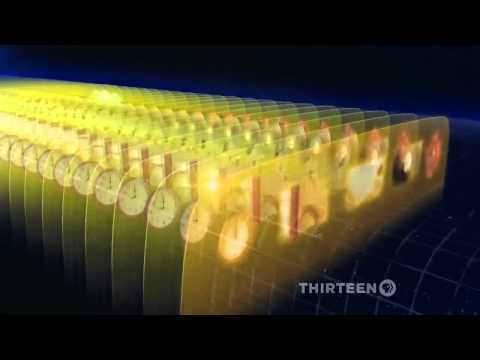 [Oh, it’s the original NOVA program on PBS that might have international issues, probably not the YouTube excerpted from it.]

The title tells me everything I need to know.

The speaker suggests that what Einstein discovered means that the distinction between past, present, and future may only be an illusion. This is incorrect. What is correct is that the distinction is far more complicated than our everyday experiences might suggest. Instead of the Euclidean notion that you have a series of instantaneous moments strung together like you do with a motion picture, the division is made by the speed of light.


Though the so called “hypersurface of the present” in this picture has no basis in reality. It is an intellectual construct depending on and attaching unrealistic significance to the inertial frame of the person doing so.

This distinction between past, present, and future is no illusion.

The speaker then strangely goes back to the old Euclidean notion which has been discarded by relativity speaking of time as a sequence of snapshots. He seems rather confused to me.

This distinction between past, present, and future is no illusion.

Agreed. That does not negate Greene’s points.

Not sure what “points” you are talking about.

Your third picture is a good illustration that the “hypersurface of the present” can equally be made in many different ways according to different inertial frames. It goes to show that all the space between past and future cones are equally the present and equally simultaneous with the here and now.

The problem with the block universe isn’t in relativity but quantum physics which shows that the future is not already there but actually created by events in the present.

I know that < that is dead and gone and that that > didn’t exist until < then.

Time is not an illusion to us, but God exists independent of it – we’re not God.

How does so-called “absolute” time and space work in other universes with respect to ours, and of course, with God?

Without any expectation or hope of convincing you otherwise, there are no other “universes”, in absolute time or space, assuming that “cosmos”, “universe”, and “world” are synonyms. If you assume that each term refers to something different, then the first and last problem is to come to an agreement on taxonomy, which I don’t expect anytime soon, and definitely not “here” and “now”.

However, out of curiosity, have you ever heard of or seen a Loedel diagram?

If God is more than a dream-like fantasy then His independence from space-time is not an exemption from basic logic, by which He cannot see what hasn’t yet been created by His non-Deist interaction with us. He can only see the future as possibilities before He chooses which of those possibilities are realized. And giving free will to us means we participate in that choice as well.

Please don’t start with your dreamy vocabulary. God’s orchestration of providential interventions, with the myriad of precursor events required over extended periods and involving multiple individuals, defies your concept of time, or at least what it implies about limiting God.

Incorrect. This is no more true than claiming it precludes weather forecasting.