The Nativity Story in the Book of Revelation

We all know the nativity narratives in Luke and Matthew. But there is also one in the book of Revelation.
In Revelation 12 we read:

And a great portent appeared in heaven, a woman clothed with the sun, with the moon under her feet, and on her head a crown of twelve stars; 2 she was with child and she cried out in her pangs of birth, in anguish for delivery. 3 And another portent appeared in heaven; behold, a great red dragon, with seven heads and ten horns, and seven diadems upon his heads. 4 His tail swept down a third of the stars of heaven, and cast them to the earth. And the dragon stood before the woman who was about to bear a child, that he might devour her child when she brought it forth; 5 she brought forth a male child, one who is to rule all the nations with a rod of iron, but her child was caught up to God and to his throne, 6 and the woman fled into the wilderness, where she has a place prepared by God, in which to be nourished for one thousand two hundred and sixty days.

Because of this imagery, Mary is often called “Queen of Heaven” especially in Roman Catholic circles. she isn’t equal to the King of course, but she is honored as the king’s mother.

@GJDS Is Mary called the queen of heaven in Eastern Orthodox circles? If so, do you have an icon to share?

Mery Christmas @beaglelady. I am not aware of icons such as this one - I know of Mary and the Child, and also Mary supplication.

Thank you. Have a wonderful Christmas! When do the EO celebrate it this year?

An interesting article related to your question: 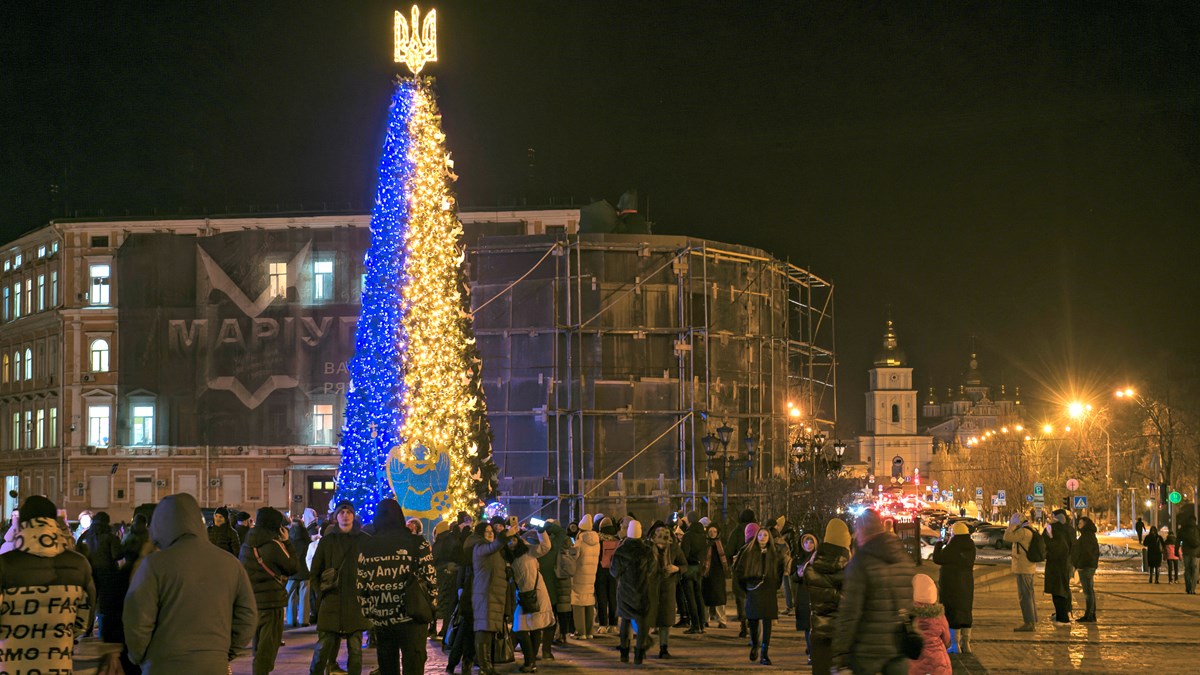 Ukraine Celebrates Christmas Twice. Now Its Orthodox Christians Can Too.

My memory when I was a child in Greece, of this time, differs from my life in Australia. The entire village participated in a series of events (I think around January with lots of snow), and the children spent most of our time on games and meals. In Australia (no snow), we focused on the local church, and groups formed based on where we came from. When my wife and I had a family, we adopted as much as we could, both the traditional events and the Dec25 celebrations. The kids liked presents and decorations, and we enjoyed family gatherings and feasting.

So I guess you can say we liked Christmas so much, we did it twice.

And another angle: “the dragon in the nativity”.

Many of us highlight the importance of surrounding ANE culture and myth for interpreting Genesis. This does something similar with the Revelation passage.

It is not certain that the woman in the vision is Mary. The signs (sun, moon, 12 stars) fit to the dream/vision about the twelve sons of Israel & their parents. The woman can be interpreted either as the people of Israel or a daughter of Israel. I have always pictured the woman as Israel, rather than Mary.

In the vision, the woman fled into the wilderness. I do not know would this fit to Mary or would it fit better to some part of Israel, maybe after the persecutions and/or destruction of Jerusalem(?). This is perhaps one of the easiest visions in the Revelation but that does not mean that it is straightforward to interpret.

I think it’s simply combining the stories of Jesus and Moses and as an extension, the Jews and Christians.

Moses and Jesus both escaped a kings desire to kill them as infants. They both fled into the wilderness of Egypt on their ways to being safe. Both were saved by their mother. We see water being used as chaos and then agent of death numerous times. If I read the hosts of heaven as taking part in human affairs behind the scenes it’s easy to presume a Satan was behind the kings wanting to wipe out the “ Hebrew messiahs “ . Perhaps around the “ table of god “ while the hosts of heaven were debating what to do the satans tried to stop the plan of saving the ones chosen as messiahs.

I also think it highlights that angelic schism of sorts took place after the satans tried to kill Jesus and failed, igniting a fight and a casting down.

I agree that he vision connects the stories of OT with Jesus. It seems to point to Jesus, not Moses.
The dragon with seven heads and ten horns seems to be a NT character from the time when Rome ruled.
The child is going to rule all the nations with a rod of iron, which points to the promised Messiah.
The child was caught up to God and to his throne.

I agree it’s about Jesus. I was showing how its tying into the stories from the tanakh all the way through revelation. Beginning to end. It’s blending all the stories again and again. It’s a text that works almost like a cycle. As you read forward, it gives you more information and clues to what’s behind it. As you keep cycling through again and again, it starts to really show how it’s all connected and pointing towards Christ. The more you learn about the events , the more it seems to pull a curtain back exposing more in the other stories. Even seeming to show parallel events happening in the heavens and how what’s happening here affects what’s happening there and vice versa.

That’s interesting, Beaglelady. The New International Greek Testament Commentary also cites the view that “the heavenly woman symbolizes Mary” but goes on to argue that the focus in this chapter is the community of faith in both OT and NT times. Still, you cite a great view.

And yes jpm…I saw the article about the switch in dates of observance amongst Ukrainians. Not surprising, all things considered.

The woman can be interpreted either as the people of Israel or a daughter of Israel. I have always pictured the woman as Israel, rather than Mary.

When Paul says that Jesus was born of a woman did that refer to Israel?

Moses and Jesus both escaped a kings desire to kill them as infants.

Moses is a “type” of Christ. He prefigures Christ. There is an Easter Hymn called Come ye Faithful raise the Strain, which associates the deliverance of the Hebrew slaves with our deliverance from sin:

‘Tis the spring of souls to-day;
Christ hath burst his prison,
And from three days’ sleep in death
As a sun hath risen;
All the winter of our sins,
Long and dark, is flying
From his light, to whom we give
Laud and praise undying.

Now the queen of seasons, bright
With the day of splendour,
With the royal feast of feasts,
Comes its joy to render;
Comes to glad Jerusalem,
Who with true affection
Welcomes in unwearied strains
Jesu’s Resurrection.

Neither might the gates of death,
Nor the tomb’s dark portal,
Nor the watchers, nor the seal,
Hold thee as a mortal;
But today amidst thine own
Thou didst stand, bestowing
That thy peace which evermore
Passeth human knowing.

Nor the watchers, nor the seal,
Hold thee as a mortal;

I wonder what that is meaning. I can’t image its goetia reference.

The woman can be interpreted either as the people of Israel or a daughter of Israel. I have always pictured the woman as Israel, rather than Mary.

When Paul says that Jesus was born of a woman did that refer to Israel?

Revelation is another type of writing, written visions that take their symbolism from the OT. In the OT, Israel (or Jerusalem that represents Israel) is sometimes pictured as a woman, even as the wife of God.

Symbolism is also seen in the description of the relationship between Jesus and His owns (followers, true church). The (true) church is pictured as a woman and there is a description about wedding and wedding feast. This symbolism is used strongly in Revelation 19. Soon after that, in chapter 21, the picture changes a bit and the bride (previously a woman) is drawn as a city, the new Jerusalem. This shows how the Revelation uses figures and metaphores to reveal what happens.

Nor the watchers, nor the seal,
Hold thee as a mortal;

Christ was sealed in a tomb and Roman guards were supposed to be guarding it.

Makes more sense. I saw watchers and was thinking book of Enoch and saw seal and thought key of Solomon and was wondering how the goetia ended up in some hymn lol

Indeed. You cant compare a letter of Paul to the visions of Revelation. Different genres.

ndeed. You cant compare a letter of Paul to the visions of Revelation. Different genres.

Did somebody suggest these are the same genre?