The Epistemology of Intelligent Design - - When will they realize?

The day the I.D. folks can design a working demonstration using the two boxes below … is the day they will be successful.

But epistemology already tells us that this is not very likely!

It is often forgotten that there was a time when there were Christians most zealous to explore the boundaries of “Natural Philosophy”. They were called Alchemists, and even Chemists, since during the 1500s and 1600s, the term was rather interchangeable! We can see this equivalence in one of the more famous works of Rosicrucianism and Alchemy: the “Chymical Wedding of Christian Rosenkreutz”.

The Chymical Wedding of Christian Rosenkreutz (German: Chymische Hochzeit Christiani Rosencreutz anno 1459) is a German book edited in 1616 in Strasbourg. Its anonymous authorship is attributed to Johann Valentin Andreae. The Chymical Wedding is often described as the third of the original manifestos of the mysterious "Fraternity of the Rose Cross" (Rosicrucians), although it is markedly different from the Fama Fraternitatis and Confessio Fraternitatis in style and in subject matter. It is an al...

Below are the last paragraphs of a very interesting article in The Economist which explores the mind set of the alchemists who thought God was on their side:

To illustrate how alchemists were … bamboozled, Dr [Lawrence] Principe [Johns Hopkins U., Baltimore] conducted an alchemical experiment using the notebooks of George Starkey [b.1628 – d.1665], an alchemist who was born in Bermuda, educated in Massachusetts and then lived in England, where he worked alongside Boyle. The experiment which Dr Principe reconstructed showed just how alchemists might truly have believed they were thinking the right way about the transmutation of metals.

Following Starkey’s recipe, a formula that took weeks to prepare, Dr Principe made what Starkey had believed was philosophical mercury—a crucial ingredient of the Philosopher’s Stone that would ripen lead into gold. Alchemical theory was rife with botanical analogies of ripening, growth and seeding. When Dr Principe prepared philosophical mercury (actually an amalgam of mercury, gold and a small amount of antimony) according to Starkey’s instructions, a strange thing happened. As it solidified, it grew into a treelike structure. For someone primed by his theory to see transmutation as akin to a biological process, this must have been a wonderful confirmation that he was on the right line, and that the Philosopher’s Stone was just around the corner.

It was not, of course. What was actually round the corner was disgrace and opprobrium at the hands of the chymists. [This is when Chemistry and Alchemy diverged.] But there is no shame in honest error. Those who believed, before Copernicus, that the sun goes round the Earth are not regarded as charlatans, even if the clerics who subsequently tried to stop the newer idea being accepted are usually consigned to intellectual purgatory. The pre-Copernicans were merely wrong, not foolish—as, no doubt, many dearly held theories of modern science will turn out to be wrong. Time, then, to rehabilitate the alchemists. They may not have been right. But they were wrong in interesting ways. 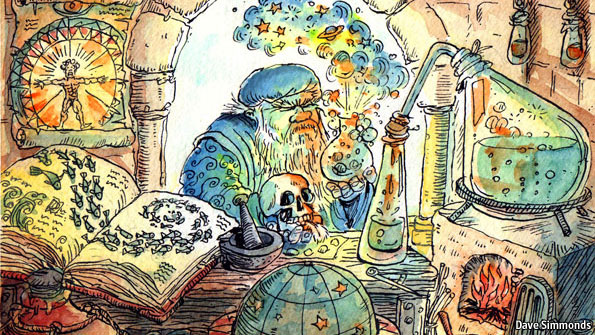 This year’s meeting of the American Association for the Advancement of Science looked at, among other things, the history of alchemy, deep carbon, the health of lonely people, tracking individuals in swarms and stuttering

The day the I.D. folks can design a working demonstration using the two boxes below … is the day they will be successful.

Just have Benny Hinn wave his hands towards one box: