Some kind of waterfall that quickly fossilized teddy bears 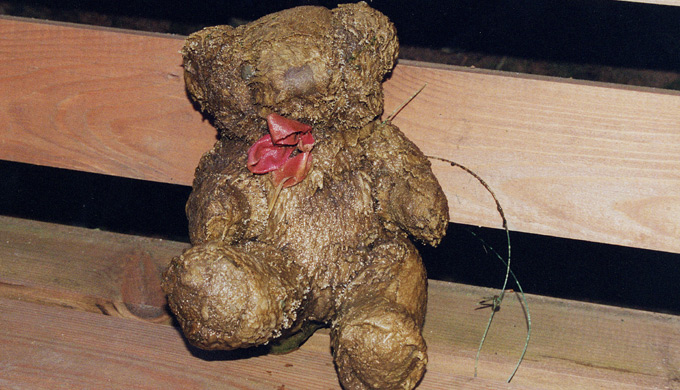 I keep hearing this argument brought up often. Almost all the links I find are creationist links. It sounds really cool, but definitely not some wrench for evolution. But it is really neat sounding and I’m curious if anyone has some good links on it.

1 Like
Did Jesus Christ, our Lord, during His physical ministry on Earth, in his truly mortal body, believe in Young Earth Creationism?
jpm (Phil McCurdy) November 12, 2021, 2:46am #2

No good links, just the obvious observation that coating in concretions is not fossilization. That is what they seem to be implying even though they use the word petrification, which is a little more vague as common usage might simply mean “turned to stone” though the scientific meaning refers to the replacement of organic elements with minerals in the process of fossilization. Gotta wonder.

There is a very brief Wikipedia page

It appears there are several caves with high mineral content water that cause this.

That’s crazy. First time I’ve heard of it. Definitely far from fossilization but now I want to stick something in one for a year xd.

I’d heard of this one before. It’s one of a number of things that are supposedly counterexamples to the supposed “evolutionist” view that fossils can’t form quickly.

There is just one problem with this argument.

In order to demonstrate that the Earth is young, it is not sufficient to show that some things can happen quickly. You have to show that everything can happen quickly in such a way as to give exactly the same end result as what we see in nature. That means that they have to account for such awkwardnesses as significant levels of lead in zircon crystals, Widmanstättenn patterns in meteorites, cross-checks between radiometric dating and GPS measurements of continental drift, extinct radionuclides, and much, much more.

Claiming that T-Rexes could fully fossilise in a year when buried underground because teddy bears (which are much more porous) can (partially?) fossilise in a year when placed in a stream of heavily mineralised running water is like claiming that just because I can get to my local Tesco Express in five minutes in the car that means I can also get from London to New York in five minutes by walking.

Livin’ proof that the cosmos is 6025 years old.

I presume that most likely for them it’s fully convincing because im sure they will just say that the flood waters coming out of the earth would have been heavily mineralized causing rapid fossilization or something. I basically could work my way through how things like cotton stuffed small toys could be affected by a year in heavily mineralized water.

I was just more interested in something that went through this subject or if there was a list of similar well or rivers. Its neat to me and fits with my general bucket list of activities. Like later this year I’m getting to go to a private mountain, or rather a large chunk of the mountain is owned by someone and it’s in Georgia and they said their is a cave there that supposedly has old paintings in it and markings on big boulders and stuff. Guess the opening use to be really small and over the decades on and off they chiseled it into a 3 foot hole and there is enough room inside to stand up. I’m thinking it’s only a hour or two drive from rhododendron hills where there is supposed to be several hundred thousands of them blooming.

Just when trying to look it up mostly was YEC stuff and Etsy accounts from all over. I tried typing in high mineralized waterfall and not much popped up either. But from all the Etsy accounts claiming to sell similar stuff I thought maybe they are all over and I’m just not familiar with the right terminology to search it out .

Another point is that encasing fossils in rock without altering them is not something we frequently see. As an example: many more recent formations in the southeastern US have almost no induration (i.e. turning to limestone) (what qualifies as “more recent” varies place to place anywhere from Pleistocene up to Eocene up), but have huge numbers of extinct species, some of them very different from any recent ones.

The layers that are limestone are mostly aragonite-replaced, (which is yet another evidence for their being old) and are made of individual, identifiable planktonic skeletons and terrigenic grains, not redeposited evaporite minerals.

Another point is that encasing fossils in rock without altering them is not something we frequently see. As an example: many more recent formations in the southeastern US have almost no induration (i.e. turning to limestone) (what qualifies as “more recent” varies place to place anywhere from Pleistocene up to Eocene up), but have huge numbers of extinct species, some of them very different from any recent ones.

right–and if I’m understanding this, right, encasing them in minerals is not actually fossilization? Thanks.

Correct-at least not in the style or material that is typical.

They should do that with donuts

I saw a car that was being hit by a sprinkler on a hot windy day, I dont know how they ever got the hard water deposit removed…

I dont think anyone would say that side of the car was fossilized.

The nature of " fossilization" varies widely, but getting a mineral
coating is not a defining feature.

They should do that with donuts

I prefer the sugar glaze myself.

The nature of " fossilization" varies widely, but getting a mineral
coating is not a defining feature.

A fossil is any trace of ancient life, according to the American Museum of Natural History.

In the old sense, yes. Typically, it is used for “it is a trace of something biogenic, it was buried at some point, and it is old enough to be somewhat altered, e.g. bleached”. Subfossil is used for very young (i.e. Holocene).

getting a mineral
coating is not a defining feature.

These certainly don’t, and nobody is claiming that they aren’t fossils (nobody else has seen them, but that’s beside the point):

And mine was a scientific definition.

Which did not seem to include throwing water on stuffed animals