Science and the Bible!

Interesting that you should frame your question including YEC, OEC and EC, because that pretty well describes my personal history

That’s super cool! We just learned about these different views in class and I wanted to come here and dive deeper.

If you poke around here a little, it won’t take long to discover that I am all about God’s providence and that he is a loving Father.

Amen! This is so true and shows how good of a God He is!

Some of the evidences for the antiquity of the earth are quite remarkable, and I would even call this one about girdled rocks fun (it’s also a favorite of mine because it includes a reference to God’s providence):

This is a very cool and interesting link. I am glad you exposed me to this and that I can research new things!

I was raised a YEC, but I realized that that view is not supported by either the scriptures or the evidence that God has given us in creation.

Got it. I personally still need to read the Bible more and understand it in order to come to a real consensus because I am still learning.

The Bible itself makes it clear that we are not to read the early chapters of Genesis as literal history.

How exactly do you view the Bible? I am very curious and want to see where you stand on interpreting the Bible.

Our faith is not based on Genesis being a historical document. It is based on the resurrection of our Savior, Jesus Christ.

I fully agree with the latter but I believe the Bible as a whole is a historical document even though Genesis is a book that stirs up a lot of different views and opinions. I will definitely read more of Genesis.

It is possible to keep your faith in Jesus while recognizing that we aren’t meant to read the early chapters of Genesis as literal history.

That’s great. I heard that from somewhere else as well and that’s good to hear.

How exactly do you view the Bible? I am very curious and want to see where you stand on interpreting the Bible.

“They are authoritative, and hence canonical, because they are the extant literary deposit of the direct and indirect apostolic witness on which the later witness of the Church depends.”

Excerpt From
The Canon of the New Testament: Its Origin, Development, and Significance
Bruce M Metzger 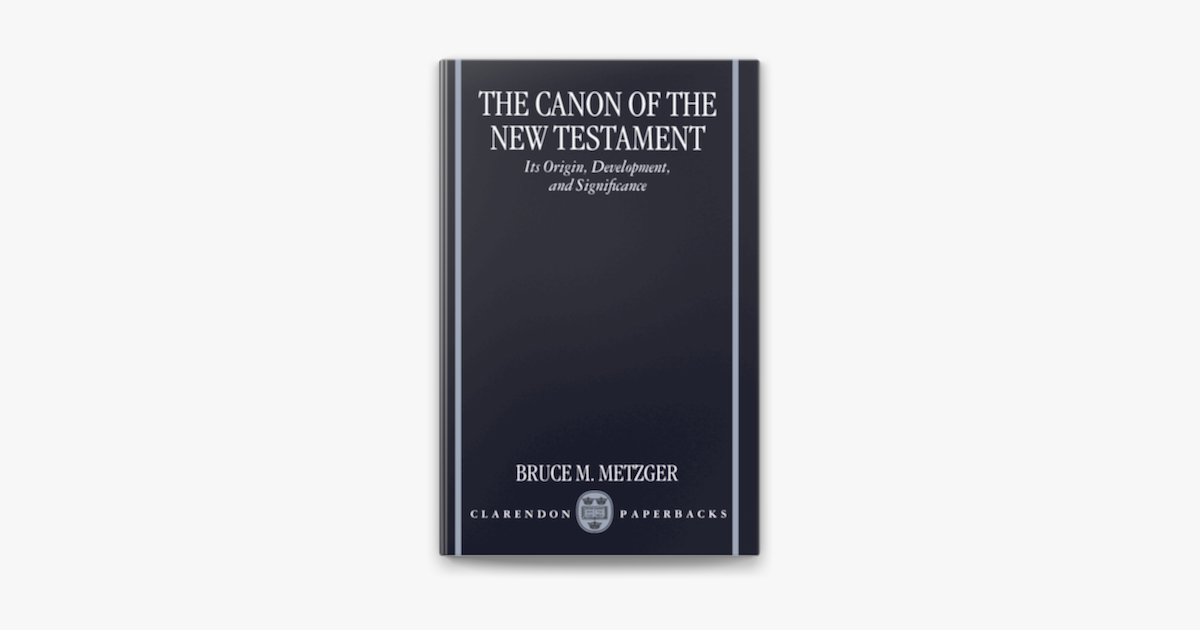 ‎The Canon of the New Testament


This material may be protected by copyright.

So I have great respect for the scriptures and view them as both authoritative and valuable.

I don’t think we should make claims for the Bible that it does not make for itself, such as claims of inerrancy or that it is, in its entirety, the “Word of God,” or that God wrote it.

Excerpt From
The Canon of the New Testament: Its Origin, Development, and Significance
Bruce M Metzger

Thank you for showing me this book!

I don’t think we should make claims for the Bible that it does not make for itself, such as claims of inerrancy or that it is, in its entirety, the “Word of God,” or that God wrote it.

Yeah and I fully agree and need to learn to not do this so often. The Word of God is made by God and shouldn’t be changed. People may interpret it differently but can’t change what it says one bit.

Thank you so much for the clarification and your help!

I think most here are familiar with Francis Collins. He founded BioLogos, where you are commenting.

So maybe his current line of research is where he should be, maybe?

The Bible actually does not deny the antiquity of the universe.

The word traditionally translated ‘day’ in Genesis 1 is a word for an indeterminate period of time, that period determined solely by context. The context in Genesis 1 is unique in all of scripture, the very creation of the universe, space and time itself, and it happened ONCE. A plea to a meaning in another later context is illegitimate.

the gaps in their thinking

That is more applicable to those of the YEC persuasion.

Did you read the fun piece of evidence for the old earth, linked above?

Wrong on every point.
The Bible says it is inerrant
2 Timothy 3:15-17a
…15From infancy you have known the Holy Scriptures, which are able to make you wise for salvation through faith in Christ Jesus. 16All Scripture is God-breathed and is useful for instruction, for conviction, for correction, and for training in righteousness, 17so that the man of God may be complete, fully equipped for every good work.…

There are today many atheists who claim to be Christians who’s only real goal is to chip away from the reality of God by denying God’s word, one verse at a time.

While Genesis is the writings of Moses, the one man who actually spoke to God and therefore wrote this from the testimony of God Himself.

Archeology confirms the overall outline of Genesis from the times of Abraham on.

Bible Authentisity text on Bet_She&#39;an Theatre Image800×1000 589 KB
P. S. Nothing within archeology contradicts anything within the Bible, though a lot of things are not proven either. In fact, not one of the miracles can be proven for to prove it, you would have to duplicate it and if you could duplicate it in a lab to be studied by or through human means would it be a miracle?
Dale (evolutionary providentialist) September 18, 2020, 7:04pm #33

I very much believe in God’s miracles in providence, you may discover, which I actually mentioned where I cited the link above. It is not about archeology, it is a fun piece of scientific evidence.

This is a scientist who began to feel that DNA was so complex that a denial of God might not be rational?

Does that question mark mean you are guessing? Because I didn’t see anything like that reading his book. Arguments from design, especially in living organisms, do not work and are full of theological problems as well. The search for God in intelligent design and picturing Him as a great watchmaker is not Biblical and more a notion of Deism than Christianity, and thus misguided with some bad implications

Here is my statement on the error of both Collins and C. S. Lewi

Here is my statement on people who say things like this.

These people remake God in their own image as obsessed with power to support their own use of religion for power over people. With their remake of the gospel into mafia-like racketeering scheme their god sounds more like the god of this world than anything like Jesus. In their opposition to science they shut the kingdom of God against men (making the creator of Earth and sky into the greatest liar the world has ever seen) and thus as religionists like the Pharisees in Matthew 23, they are children of hell and effectively devil worshippers.

if Collins were to look at evolution and reveal the gaps in their thinking would this help Christianity at all?

Collins does look at the gaps in the thinking of this American Xtian cult and thus greatly helps world Christianity in overcoming the shame many Christians are made to feel because of the bizarre irrationality (demonstrably worse than the Flat Earth society) that they get lumped in with because of them.

You realize he wrote a best-seller looking at evolution, right?

…and that people have become Christians, or returned to Christianity, because of it.

The Bible says it is inerrant

The Bible never claims to be inerrant, and there are some obvious errors. Any (non cursory) study of the synoptic gospels (Matthew, Mark, and Luke) will make that clear.

Haven’t you noticed them?

By the ways, the passage in 2 Timothy 3:

Do you need for me to point out one of the minor errors? God never promised us a perfect book, but He gave us a perfect Savior.

While Genesis is the writings of Moses,

By the way, Genesis never claims to be the writings of Moses.

Dr. Collins wrote a really good essay on Christianity and evolution that is well worth reading:

He does a great job discussing his own testimony, his scientific career, evolution, and the intersection of theology and science. Even if you disagree with Dr. Collins, I think you will at least understand where he and many other Christians are coming from.

The trick is to use science to interpret the Bible with no religious preconceptions whatsoever.

The question mark is to ask you to think.
The literal quote from Collins does sort of state the opposite:

As for your insults regarding me and my motives.
I am not reinventing God, I am expounding the God of the Bible according to the Bible!
While I have just decided to report you for insulting me and lying.

For it is your own wisdom that is lying and attempting to twist the truth of God’s word.

NO I did not know this and I am deeply saddened to hear it from someone who admits that God exists.

However, thinking that human guesswork and extrapolations is better than God’s word is the worst possible folly of all.

Atheism_Richard Lewontin 2ya1023×550 375 KB
You cannot sanely throw out what the Bible says based upon theories that cannot even be tested much less proven.

We say common ancestors, instead of a common creator to make sense of how much common DNA is present. But a common Creator would inherently make common descent unnecessary.
While a Creator capable of forming things in a fully completed manner would make billions of years of evolution totally unnecessary.

While the reality of the situation is this, evolution is only a theory to explain how things might have come about, without any Creator and without any Common Designer.

As for butterfly equaling God breathed.

It is actually stupidity, not to see the truth of God’s word when this is very clearly stated, but to explain it away so that the Bible and false theories about origins can be interwoven into what will become the literal plan of satan. For Revelations clearly cites an alliance between a false church, which is referred to as the great whore and a goverment entity that is clearly defined as the beast.

Let us all come together, without Jesus, is not the plan of God, and when and if the world shows you a false Messiah, and you follow them, you will only do so to your own destruction.

As for evolution being proven, do you not know that current cosmological theory has so great a mismatch with current testing that it is absolutely absurd: