Predestination or Free Will?

Dear Dale,
I believe that it is to your disadvantage to shame others for not believing what you do. That is the only point I was trying to make. Free will is God’s gift to everyone.

Yes, God predestines people for a role in His providence, elects people for tasks, chooses them for something He wants them to do, ordains all kinds of blessings and challenges. But do things always happen as God plans or desires? It is a demonstrable FACT in the Biblical narrative that this is not so! There are plans which go awry, people which fail their appointed tasks, desires of God which are unfulfilled, things which people do which disappoint God and grieve Him to the very core. Could God control absolutely everything? Easily! But is God such a shallow person that He must control everything? No. Is God incapable of making anything which He does not control? A God incapable of this looks too pathetic to me to be called God. Looks like a control freak to me and a creation of those obsessed with power and control, too convenient for those who use religion for the manipulation of others. Sorry… no offense… but that is what I think.

I believe that it is to your disadvantage to shame others for not believing what you do.

Do you believe those words are not in the Bible? That is not about what I believe.

enslaved by the theology

But is God such a shallow person that He must control everything?

God’s timelessness and the depth of the dynamism of his instantaneous relationship to his creation is evident in scripture and through his workings in providence, and there is nothing shallow about it. Providential events have to be “planned” (I use scare quotes because it is a tensed word) and their independently occurring aspects frequently have nothing to do with free will (again, the events in the sequence of my kidney cancer illustrate that well.) Please reflect on that detail.

The story of God’s plan to save the family of the patriarch Israel, and thus the nation of Israel, in his providence through Joseph, included all kinds of “planning” and illustrates nicely Father’s moment by moment and year by year sovereignty. “Sovereign” is not just a title for God, it is also a description.

The Lord actively holds the universe together every sequential nanosecond that passes. Please don’t make him out to be less than he is.

He is before all things, and in him all things hold together.

Just a reminder from the forum guidelines:

The purpose of discussions here is not to judge the legitimacy or efficacy of anyone’s faith or lack of faith.

Let’s stay focused on ideas and not on making insinuations about other people’s faith.

IF God controls everything that means there wouldn’t need to be a satan. Not only that but that means many people who are evil don’t always get punished until later in life. Wouldn’t make it impossible for mean to get justice if that means God already planned for people to escape their crimes?

I delight in God’s providence. Enslaved by it? Hardly.

Here’s an example of one that was just fun.

11/17/13 On my way east for church this morning, as I was coming up to Cabela’s on Highway 30, there was a very large wooden outbuilding being moved. It was wider than both of the two eastbound lanes, blocking them and the shoulder, and really crawling. I’m guessing it could not have been moving more than 1 or 2 miles an hour, 3 max. (And I am never early!)

But as the Lord of time and space would have it, the timing and spacing was such that, as I came up on it, after having to wait momentarily for someone ahead of me to turn into Cabela’s west entrance, I turned into the west entrance as well – then, driving east through their front parking lot, I exited out the east entrance, passing the building that was obstructing the highway as it was slowly moving along. I came out behind the county patrol car that was leading the slow-moving parade, but in front of the building being moved. Passing the patrol car, I went merrily on my way.

There were, of course, alternate, longer routes by several miles on county roads by turning around and going back, but it was just cool the way it happened.

The Sunday School lesson (David C Cook Adult Student Book Comprehensive Bible Study September-November 2013 Vol. 130, No.1) for that morning(!) was on Moses and the Israelites crossing the Red Sea. One statement was “The God of the Bible is not an abstract deity. He does not stand aloof from our lives uninvolved in them.” One of the questions (9.) was, “When has God been there to help you even before you knew he was there?”(!!)

Here is a map illustrating the location:

And here is a photo of a building being moved, not the actual building involved, but just one from online to give the approximate size for perspective, and for those who may not have known about buildings being moved:

Try and imagine all of the details that had to work together to set up that scenario – they would be myriad. That is how sovereign God is over instants and actions, and no one’s free will was violated. It may bend your mind, but that is the way it is and that is what scripture teaches.

Is Free Will possible?
Prayer - Does It Work? How Can We Know?
How I Discovered, as a Scientist, that God is Real
Random and failed
If it was proven that the Earth is no more than 10,000 years old
Big Bang redone?
Dale (evolutionary providentialist) November 25, 2019, 3:46am #99

IF God controls everything that means there wouldn’t need to be a satan.

I think that misrepresents the reality, and it is not an unusual misperception. It portrays God as a puppetmaster and individuals, including satan, as having no free will. You really have to accept “both and” and not “either or” – God is sovereign and we have free will.

It is way counterintuitive, and I think it takes some humility before scripture to accept it, but that is what the Bible teaches. It is a case of our insistence that we have to be completely comfortable and have God within the box of our understanding.

@LM77 – Would you weigh in on a couple of these? (You be more articulate than this ‘un.

Very kind of you to say, @Dale. Unfortunately, I’m now entering the busiest period of time in our church calendar. I’ll still be lurking in the background reading and liking posts, but my own time to post - especially anything useful, let alone, articulate - about theology will be considerably limited. Sorry champ, I’m afraid I’m on the bench for this one.

With you in spirit

So now I’m a bit more confused. Does this mean people who are raped are already planned to be raped? To be honest I believe this. That God doesn’t always give individual destination. For example, all of the Jews are his choice people. That Jesus is for all individuals and that’s the individual predestination

That is a disturbing example. Another result of holding to rigid predestination is that would mean interventional prayer never helps and God never intervenes as it is already chiseled in stone. Hum.

Both of those are in the past, and are unfair descriptions of the timeless instantaneousness of God.

My examples show how he is both sovereign over the past and at the same time, so to speak, is sovereign in my present, dynamically.

And he is already in my future. He’s not waiting for me to get there.

I had a Christian friend whose office overlooked the shallow and muddy Schuylkill River in Philadelphia years ago, and one very windy day with the particular topography (above and below the water), wind speed and direction, he was excited to see the muddy bottom of the river in a trough made of water all the way across, with water on the left and on the right, upstream and downstream.

That, of course, reminded him of the Exodus and the Israelites’ crossing of the Red Sea. Having had more than a little experience with God’s providential timing myself, I suspect that the sea might have parted without Moses and the Israelites being there. But they were.

My examples show how he is both sovereign over the past and at the same time, so to speak, is sovereign in my present, dynamically.

You’ve been using the word “dynamic.” How is there anything dynamic about a timeline that is set in stone?

How is there anything dynamic about a timeline that is set in stone?

Your use of ‘set in stone’, past tense, tells me that you have not been able to place yourself in my shoes in my co-instants accounts. Those were dynamic and unfolding and not static.

Here is one of the more amazing accounts. It is not the most spectacular or startling, but it does show how comprehensive is our God in the details of his care for our lives (but maybe not as much as the DNA in my kidney

). We need to trust him implicitly and not be afraid of anything. 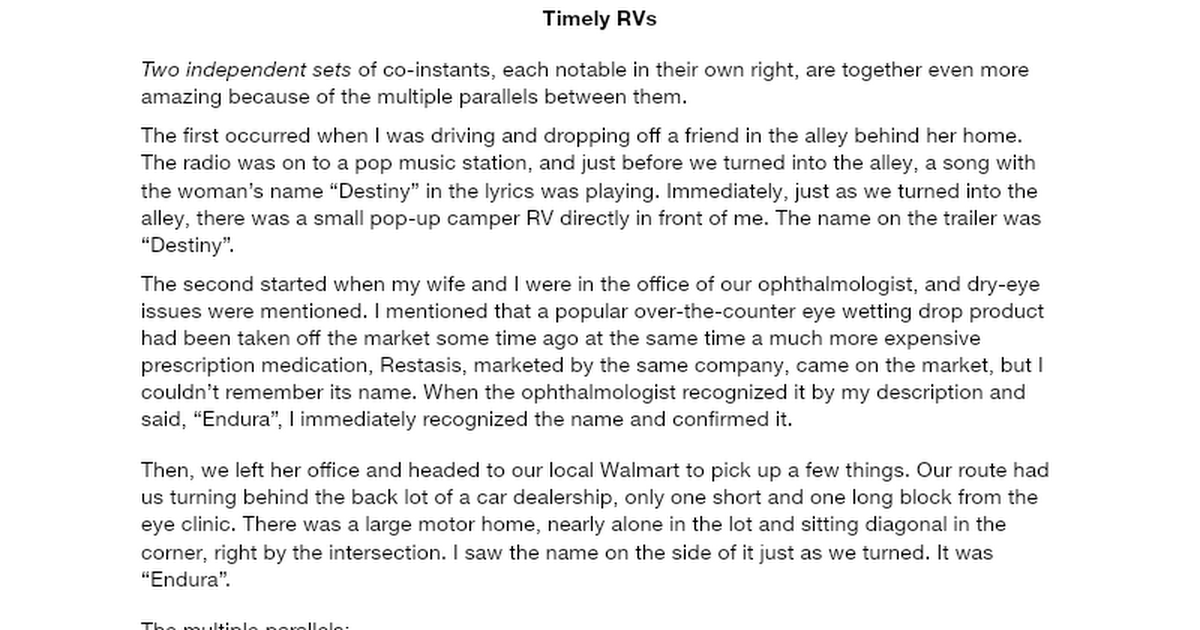 Your use of ‘set in stone’, past tense

I was very careful to say “is set in stone.” That is present tense. But if I understand you correctly, tense is irrelevant.

I was very careful to say “is set in stone.”

“…is set in stone” means that it is something that already happened in the past and will continue into the future unchanged (as opposed to “…is being set”, which means that it is happening now). And yes, every time we use a tensed verb (there is no other kind) in this kind of conversation about God and time, predestination and free will, it needs to have a delimiter set (or removed