Oldest Book in The Bible

It seems likely that Job may (very hard to be certain) be the earliest-written book, albeit not the one describing the earliest events/setting. The setting of Job seems most like c.1800-1600 BC, contemporaneous with the patriarchs. Given the archaic-looking components of its writing, it may well have been written closer to that date than other books.

Given certain components, such as the exact formulation of the covenant, the best-fit date for the initial writing of (at least much of) the Torah seems to be about 1350-1200 BC., with some later comments like “it is here to this day”, or updating place names like Laish to Dan, or referring to the coastal people in Genesis as “Philistines”.

Does this mean Job is the oldest book in the Bible?

That is what I learned in OT courses.

Does this mean Job is the oldest book in the Bible?

That is what I learned in OT courses.

That’s interesting b/c most recent OT (including evangelical) and Hebrew scholarship is decidedly against an early Job. Genre-wise, the book is a counter to an over-optimistic view of wisdom (e.g., a simplistic reading of Proverbs). This would at least suggest something post-Solomon. Most put it no earlier than 7th c. It must be admitted, however, that arguments for dating can be tenuous and sometimes circular.

Never said I took those courses recently, LOL.
I will happily defer to the Bible scholars’ most current arguments, circular or otherwise.

Ive always been told that Job is probably the oldest written text.

A quick check of a couple of commentaries results in a “we don’t know”.

Back to the opening post mentioning Genesis, I have always thought it was a pretty late writing, at least in its present form. I am reminded that Josiah found “the book of the law” presumably Deuteronomy or a precursor text, in the temple and it was a big deal, implying that they didn’t have it and perhaps little other written scripture at that time in the 620BC or so age, One wonders then what survived the exile in written form, though no doubt oral tradition was maintained. And, with that oral tradition we as Christians hold it too was preserved and inspired to contain the message God has for us. That and the references and subject matter tend to put Genesis as written during or shortly post-exile.

Trying to write everything in old English is too much work. he he he… Point being that just because that was written in an older style doesn’t mean it was written first.

Regardless of when the Pentateuch texts we have were written down, that doesn’t tell us how old were the oral traditions they came from.

Hi. After doing some research, I have found that many ( if not, most) scholars believe that Job was written by 2 authors, because the book of Job also talks about the exile, and there are some writings of the book that most likely are before the exile. As you said, a lot of the books genre seems to be wisdom reading, like proverbs. Proverbs was written by Solomon (Ecclesiastes 12:9). Additionally, the Hebrew title is translated proverbs of Solomon. Ecclesiastes is also wisdom reading, and there are verses that indicate Solomon was the author. Because all the books listed were written by Solomon, it’s most likely that the pre-exile part of the book was written by Solomon. However, someone on the internet said this: “1. Archaic spelling. If there is a difference in spelling a word, Job consistently uses the oldest form. For example, “yom” may be spelled with a waw or without. With is the oldest spelling, and that’s how it’s spelled in Job." As you can see, this person is saying that the book of Job uses archaic spelling, and because it uses old-fashioned spelling, it must be old. However, as I said above, it seems likely that Solomon was the author for the pre-exilic part of the book. According to this person, Job is the only book that uses archaic spelling. However, even most scholars agree that Solomon is one of the most likely candidates for authorship. If, according to this person, Job is the only book that uses archaic Hebrew, and all the other books didn’t use it, why aren’t Proverbs and Ecclesiastes written that way? Or are they? Is this person correct? Do other books in the Bible use archaic Hebrew?

I don’t take Solomon as the author of Ecclesiastes, so I don’t have the same impetus to see him involved in Job. But archaic spelling (to the degree that it exists, but there’re also linguisitc details that indicate later dating) could indicate old or something that is meant to sound old.

As I stated above, dating arguments are not rock solid, and IMO don’t really matter too much. (Sorry if I made this a bigger than intended.)

My first response (to your friend) is that texts should be interpreted within there own context (including genre). Even if Job was older than Genesis, it would not determine the meaning of the same vocabulary in Genesis. Language doesn’t really work like this in general.

To be honest, I don’t 100% understand. What I probably should’ve said is that the words originally meant chaos and order, and only after Genesis was written did the meanings changed. The words I’m talking about are ereb and boqer (Strong’s 6153 and 6154 respectively). This is what many websites said, and I tried to show him them. If Job, the words Ereb and Boqer meant evening and morning. If Job was written before Genesis, then the information on the websites must be false.

I think this is the problem. The words didn’t originally mean (denotion) chaos and order, but simply evening and morning. I suppose one could take them to figurative symbolize (connotation) chaos and order, but I don’t really see that either. Usually, in discussions of Gen 1, it’s v. 2 that described as chaotic, with order being brought in through the divine acts on Days 1-6 beginning in v. 3.

ok. can we also discuss this on the evning and morning forum?

something that is meant to sound old.

One site suggested this that I looked at. Someone may have intentionally used archaic language to make it sound ancient, much like some may write poetry in Old English for effect. Job was mentioned in Ezekiel, so at least was known in the time of the exile 600 BC or so.

However, strong’s concordance says that Boqer strongs 1242 (meaning morning) came from a verb strongs 1239. The meaning generally means to search, inquire, and care. Many people believe that the theme of the verb is putting things into order. Most nouns in Hebrew come from a verb, and their meaning is related to that verb. Also the feminine version Baqqarah in MODERN ( not nessecarily biblical) Hebrew means control. Because of this, many people believe that Boqer meant control, and after Genesis 1, came to mean morning. Your thoughts?

The purpose of Strong’s Concordance is not to provide content or commentary about the Bible, but to provide an index to the Bible.

It is based on the KJV and was first published in 1890. There has been a tremendous amount of work since then on translation so needless to say it is out of date. 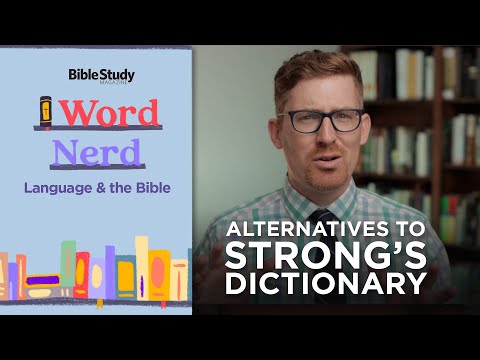 And a link from that video

Biblical Language Principles That Will Improve Your Bible Study

Here are four biblical language principles to improve your Bible study regardless of whether you seek proficiency in New Testament Greek.