The Newest edition of Journal of Biblical and Theological Studies has an article – "The Beginning of Days: A Response to Jeremy Lyon’s “Genesis 1:1–3 and the Literary Boundary of Day One” – which seeks to prove for a peer-reviewed, scholarly journal, that Young Earth Creationism is not founded on a proper interpretation of Genesis 1:1-3.

Hi John, that’s quite the in-depth paper, and it does seem to have good reasons to not view Genesis 1:1 as the first event on day 1. You mainly argue that this verse should be read as a prior action of God sometime before the creation week.

You don’t spend much time on what seems to be the most common reading: that “In the beginning God created the heavens and the earth” summarizes the account to follow. It’s neither the beginning of the first day nor an event before the first day. I find three pieces of evidence compelling for this reading:

Anyway, perhaps this reading is outside the focus of your paper, but since you do briefly mention it, I thought I’d add what I see as the strongest support for it.

Thanks for the thoughtful reply. The idea that Genesis 1:1 summarizes everything in Genesis 1, hence is a title, is discussed on page 164. The most obvious problem with this interpretation is that, if that were true, there would be no statement in Genesis 1 of the creation of the planet. Where did the planet earth that is “void and desolate,” the “deep” and the “waters” in 1:2 come from if it is not created until day two or three? Even if 1:1 is a title, it is still not proven that day one dawns in 1:2 because of the three statements there, before the “and God said” demarcating each day.

• I don’t think most people read Genesis 1:1 as a title nor is that the natural reading. Even YECist Jeremy Lyon concludes that “the arguments in favor of the summary statement view of verse one are unpersuasive and appear to be forced onto the text.” Since the article is written in response to Lyon and Lyon makes a solid case again the title-view, I didn’t need to go into a lengthy response debunking it. I note that John Sailhamer argues that “beginning” (תישִׁ֖ארֵ) in 1:1 is not a title but God’s original creating act. Also, almost all scholars and other careful readers recognize that the account beginning in Genesis 1:1 continues until 2:4. The chapter division is unfortunate.

• You’re right that the phrase "“the heavens and the earth” (1:1) is “a merism” for everything. It is saying that God created everything at some undisclosed time prior to day 1. The six days does not describe the original creation but a subsequent action on the planet created in 1:1.

• Genesis 1:6-10, days two and three, describe first the separation of the water on earth between the seas and the water vapor in the sky, day two, and the dry land in day three. Both require the pre-existence of the planet which is created in 1:1, at an undisclosed time prior to day one.

We might see things quite differently on whether we should read our current understanding of reality into the text. In Genesis 1, Earth is dry ground above water, not a planet. The firmament keeps in place the upper waters that are above the sun and moon; it isn’t just water vapour in the atmosphere. For me, adjustments based on how I view the world differently than the initial audience have to come after I’ve tried my best to understand what the text is saying (using the work of others, of course). I don’t want to force the text to share my perspective.

You’ve exposed an important consequence to viewing Genesis 1:1 as a summary. In this case, 1:2 describes the situation prior to the creation week. That leaves us without explanation for where those dark, chaotic waters came from. Since several other ANE creation accounts also start with chaotic waters, that wouldn’t have bothered the original audience even though it bothers us. Further, I don’t see how a reading of Genesis 1:1 that shows God created everything from nothing is helpful. For skeptics of ex nihilo creation, pointing to 1:1 won’t help since there are other legitimate ways of reading it. For those who affirm ex nihilo creation, other biblical passages more clearly support the idea (such as Colossians 1:15–17).

The summary view is still compatible with creation ex nihilo, but it doesn’t address that mystery. This is similar to how you read Exodus 20:11 and 31:17. In your view they don’t include the original creation of the heavens and the earth that happens before the first day, but their silence on that shouldn’t be read as contradicting it.

There are also consequences to viewing Genesis 1:1 as an event before the creation week. This reading starts with nothing, but the initial creation seems to end with an unfinished chaos. That’s unusual for an act of creation by God (e.g. Isaiah 45:18). One could argue that the first human of Genesis 2 was also created incomplete, and Jesus did heal one person in a two-stage process, but at least in Genesis 1 God’s creative acts don’t need later tweaking.

Alternatively, if one reads the creation of the heavens and the earth as a merism meaning everything, it seems too complete. If everything is already created in 1:1, why is there emptiness in 1:2 and what’s left for the six days? Are they just looking over what God has already done? Or are you suggesting the first creation was undone between the first two verses?

I don’t think most people read Genesis 1:1 as a title nor is that the natural reading.

Gordon Wenham, who disagrees with the summary/title view, states that “The majority (Driver, Gunkel, Procksch, Zimmerli, von Rad, Eichrodt, Cassuto, Schmidt, Westermann, Beauchamp, Steck) adopt the view that Gen 1:1 is essentially a title to what follows” (from his Word commentary, page 12). To those I’d also add John Walton, such as in his NIV Application Commentary on page 70. It’s not a view without prominent advocates who know their Hebrew.

Also, almost all scholars and other careful readers recognize that the account beginning in Genesis 1:1 continues until 2:4. The chapter division is unfortunate.

Perhaps the only good thing about that chapter break is that because it’s both absurd and the first, it helps us see that chapter divisions aren’t inspired!

The reason I pointed to 2:1 is because it summarizes the work week before the Sabbath. I read 1:1 and 2:1 as summaries of God’s work without themselves being any part of that work. They don’t summarize the whole week, which would require an extra clause about the seventh day (as in Exodus 20:11 and 31:17). So yes, I agree the Sabbath is not only part of the week, it’s the climax of the week, meaning the account doesn’t end until 2:4.

Hi,
The Hebrew word eretz can mean land or earth (as in the planet). Obviously, the planet is created in 1:1 because it is described and acted on in 1:2. The earth is created before the beginning of the days.

The article is also narrated and illustrated here: 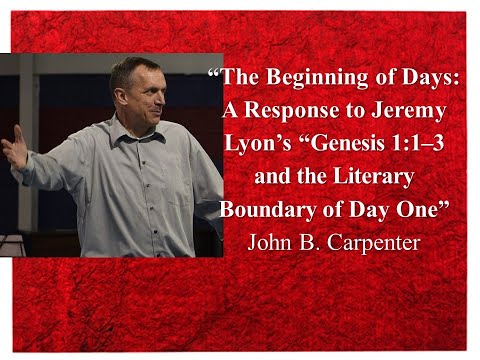 “I highly recommend this article.”

Gap theory is nearly as old as Jesus.

Maybe, then, it’s the best interpretation and so YEC is wrong in it’s handling of Genesis 1.

Of course it always has been John. All non-allegorical interpretations are.

Maybe also all interpretations at odds with reality.
Thats what I like to think.
Of course i see the Bible differently than Christians or
Westerners in general.