Just watched a wide ranging discussion between University of Toronto professor of cognitive psychology and cognitive science John Vervaeke and polymath Iain McGilchrist. It certainly was not a debate. Coming at the subject from different perspectives, they end up agreeing on many point. Hearing how each express what it is they agree on brings the topics into clearer focus. Their discussion which was recorded about a week ago is narrated by Curt Jaimungal on his Theories of Everything channel. This episode is titled God, Meaning, Consciousness and Being: 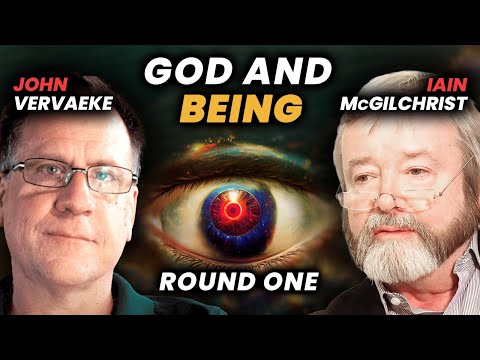 I’ve titled this thread differently because the part I’d draw your attention to can be found in a seven minute patch toward the end, between the 2:00:20 and 2:07:20 marks. This section begins with JV discussing religion, myth, prophesy and the cultivation of virtues and ends with IM discussing the limits of certainty and how the primacy of the implicit sets limits on what we can accomplish with words. I can’t transcribe well from a video and Vervaeke in particular talks very fast. But at the beginning of the seven minute section JV says:

That video says there’s a transcript of it available: click on the three dots below and to the right of the video “. . .” and then click on “Show Transcript” in the pop-up menu.

Thanks Terry but when I click on the three vertical dots I don’t see anything about a transcript. Captions probably comes closest.

Must be a “Northern California 'thing”".

Looks like you’re on a computer while I’m on a phone. Too bad they curtail that option. I’ll look some more.

I am on a computer. And you’re right, when I look for those dots on my phone, I don’t see 'em.

If you open it in the YouTube app on either Apple or Android devices, you can view the transcript. Just tap the ∨ symbol to the right of the title under the video and then scroll until you see the SHOW TRANSCRIPT box.

Strange. There doesn’t seem to be a Show Transcript box on my iPhone. But thanks for trying.

You’re using the YouTube app, not Safari, right? It should work…

While trying to find the transcript I listened again to this part where IM responds to JV’s idea of drawing from a number of sources to recommend intentional practices which can help people progress in wisdom. He echos what I hear many of you here saying about why a long tradition which has evolved to reflect the thinking of many just is more likely to be successful than what anyone can scrap together on their own. I agree with what IM says but like him it doesn’t lead me to go all in with any particular tradition. We’re weird or at the very least inconsistent. But I don’t find the pursuit of consistency trumps every other consideration. Like everyone else, I am caught up in some truth. It chose me, not the other way around. I don’t think I am in command of all the facts to the degree that I can compose truth from scratch on rational grounds. It is something we feel our way into.

While trying to find the transcript…

I haven’t watched it. So I hope the time stamps are helpful for anyone who needs a TOC (table of contents).

Below is a link to a Google Doc I created with the auto-generated transcript from YouTube, which will only provide limited help, because it doesn’t identify the speakers. It will really only be useful as a basic guide for what was said, but not who said it. Additionally, it’s not edited, so all the misstarts in speaking are there.

Iain McGilchrist Λ John Vervaeke on God, Meaning, Consciousness, and Being Theories of Everything with Curt Jaimungal a special thank you to Garrett Vandenberg and Matthew Wyden for helping me not only frame this conversation but 0:05 come up with...

I probably won’t keep the file forever. So, if you want to read it, go ahead and save your copy now.

You’re welcome, Terry.
You got what I copied and pasted from the video header.
I hope the transcript is useful to you.