Jane Goodall wins Templeton prize, says that all creatures are sentient must have a spirit or soul 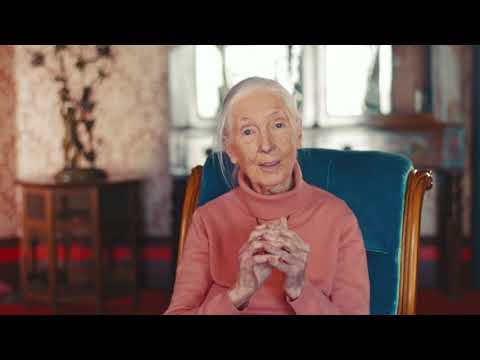 I know many Christians must feel this is slanderous but I think many here will agree that to say every creature carries something of spirit or soul need not undermine the special regard we have for our relationship to the divine. Personally I’d go further to say everyone of them is an image bearer too. If God had a hand in creation then each one is a part of His body of work and who is to say that Gods nature does not go beyond that which we exhibit?

an image bearer too.

My view is not so different.

I certainly believe that all living organisms have both consciousness and spirit, though I think life and consciousness are highly quantitative varying not only between species but also between individual organisms, particularly between people. I don’t believe in the rational soul of Greek philosophy or in fact anything implanted or supernaturally added to organisms or people to make them more. Rather I believe that the spirit is the creation of the choices of living organisms.

I am not a huge fan of the “image-bearer” terminology, but I do believe all life is essentially in the image of God to some degree – its infinite potentiality reflecting the infinite actuality of God. But I also think there is a radical difference in human beings, and more to this created in the image of God stuff than this. I do not believe we are just another biological species or that our humanity is nothing more than DNA. We are different from other species because of language, which is more than just an ability to communicate. But with representational and abstraction capabilities surpassing DNA, language can be a medium for the self-organizing process of life itself, and we see this realized in the human mind. And that brings us to the other meaning of being created in the image of God – it is about the creation of children and it is an inheritance which makes one the children of another, and we have an inheritance of the mind directly from God’s communication with us – abstract ideas about being a person, love, goodness, responsibility, and justice.

True, the jury is still out on what that exactly means, but most of us have some idea.

We are unique because of language, which is more than just an ability to communicate. But with representational and abstraction capabilities surpassing DNA, language can be a medium for the self-organizing process of life itself, and we see this realized in the human mind.

I agree with almost every word but … [we always do this] … for this part, though even here I mostly agree. I don’t think of language as being that which makes us human so much as being that which makes rationality possible which in turn sets us apart. Language magnifies our power but at great risk because it is possible to mistake the representation for the thing itself just as it is possible to mistake knowledge for understanding, especially where other beings are concerned. There are no combinations of language which can completely communicate who or how we are, or other creatures either. I don’t think I’m disagreeing with anything you’ve specifically said but I’m not sure if you see the shadow side of language as well as its usefulness.

I think all living beings have a soul. We don’t see anything different in the Bible. Being made in his image is not about having a soul. The breath of life according to the tale of Noah was in all living things. I extend that anything considered alive personally regardless of which kingdom it belongs to.

Don’t bees have a symbolic language?

I think they do their talking by getting a little jiffy with it on the dance floor.

I can assert the exact opposite. Doesn’t make it true. There is no revelation about the ontological nature of animals. We are called to be good stewards. Beyond that it’s just an opinion.

I honestly don’t see how we can claim animals have souls and bear the image of God as sentient beings and not become vegetarians. I’d honestly say the hypocrisy in this drives me away from accepting this view. I don’t think eating chicken nuggets at McDonald’s is participating in murder. If God designed life so sentient beings made in his image have to murder each there to live, there is something really off about God. If animals are as some here claim, I think Christianity and any theism based around an all-loving God crumbles. It’s bad enough we have to cope with the natural disaster but now we must engage in image bearing cannibalism?

I think most people today are too far removed from slaughtering their own meat and watch too many Disney films and project their own values onto animals. None the less, we are called to be stewards and treat animals ethically and responsibly, even the ones we eat.

Pretty sure she documented hunting and meat eating among chimps and yet she still insists they have a spiritual nature. I don’t find the eating of meat a moral issue so much as a logistics problem for sustainability. I don’t know why so many object to it. Every living animal so far as I know requires nutrients from other living creatures. If it were easy to do I’d leave my own remains to be consumed higher on the food chain. But apparently over our long lives we accumulate so many toxins that we’d not be doing many diners a good deed. So I’ll just be grateful if blowflies will help disperse whatever is of use from my corpse back into the biosphere. I won’t need it any more and I like the idea of giving back.

They can communicate extremely detailed instructions on where a food source is!

It is impressive and it is definitely communication.

To each their own. I find it odd that we have to murder other “image bearers” in order to survive. God is not all good in that scenario to me. Why is it okay to eat a cow but not a human? Or are we just made more in the image of God the cows?

I wouldn’t characterize feeding as murder for any other creature and I don’t think it is apt for us either. We have a conscience and that should factor into the ethical dimensions of our feeding behavior. But whether we’re killing animals to eat or ripping vegetables out of the ground to eat, it isn’t avoidable and it isn’t wrong.

So animals being sentient creatures bearing the image of God really means next to nothing then. You would think that ontological status would afford them some inalienable rights…

According to the tale of Noah… Personally I wouldn’t press any of the author’s background knowledge or assumptions too far there.

I guess I don’t see a reason to avoid doing that. I think one of the pints of genesis 1-11 is to set up biblical patterns and spiritual truths.

I guess I don’t see a reason to avoid doing that. I think one of the pints of genesis 1-11 is to set up biblical patterns and spiritual truths.

I think that is missing my point a little. What did “breath of life” mean 3000 years ago?