I am just reading Eric Metaxas book which came out last year, “Is Atheism Dead?” I wonder if anyone has read this or what people’s opinions are about it.

Hmm, it looks like the glowing reviews of the book are from the Intelligent Design crowd, Old Earth Creationist apologetics crowd, and conservative politics crowd.

For me, that tells you what kind of book it will be. It looks like the main topics focus on things like:

For me, I plan to avoid the book as I’m not interested in hearing more of the same bombastic apologetics flair that I’ve stepped away from over the past decade. I personally think that this book contributes little to the overall discussion and is just a strategic marriage of different apologetics and conservative political streams.

I had to look up Sarah Salviander, but it looks like she is certainly a YEC!

What @David_Lee said the other week bears repeating (and I’m sure @DOL concurs, right, Doc? ; - ):

We just had an ally of Ken Ham come to our church last week. He asked what we should do if we can’t trust the first part of the Bible. The main argument of course is to shore up trust in the Bible, and I have to admit that’s a difficult question.

He implicitly accuses ( in nomine Ken Ham): “you don’t trust the Bible”. And then builds everything on the assumed validity of his accusation. From that point on the rest is noise, and no-one hears each other. Discussing the science merely gets drowned out in that increasing multi-decibel white noise.

Perhaps forget the science. Refute head-on and with confidence his initial accusation. He accuses you of “not trusting the Bible”. His accusation against you is an untruth. (You might, if you choose, go further and call it a lie and slander: but that’s a pastoral call in the moment!) Call out that untruth. Expose it. Refute it. Don’t go a step towards any science at all until he backs off his “you don’t trust the Bible” accusation against you.

I am increasingly convinced that science arguments against YEC pseudoscience are a waste of time… until the YEC at least can at least accept that you “trust the Bible” just as much as he says he does.

For our apologetics, the science is merely secondary and often a distraction. Primary is our defence of our respect for God-breathed scripture up to at least the level of the most “biblical” YEC.

(By the way, I have cast this as “he”, simply and solely because Randy’s visitor is described as “he”!)

So the book is DOA?

I mean Dennis Prager said he’s going to read it so there’s that.

All kidding aside, it’s perfectly fine and wonderful to push back against certain silly atheist narratives. I just think that I feel alienated by Metaxas’ approach where I am genuinely curious to figure out what mechanisms lead to fine-tuning or how we might better understand the origin of life someday. I have little interest in using science as an apologetic for God’s existence, especially in scientific areas that we don’t know a lot about. Such gaps in knowledge seem to get some people really excited, as if a lack of explanation or an explanation means anything for theism or atheism. And in my opinion this is the same old same old just repackaged in a slightly different way to a slightly different audience.

Seriously when I first read the title I thought that the best case scenario would be that bombastic atheists would have to become clear that belief in God is not on par with the existence of quantum gravity, helium or the giant woodpecker. It isn’t an empirical claim so there is no question of evidence. Rather, belief in God is a stance toward the world which takes the nearness of God as equally self evident as one’s own existence. From that point of view the nonexistence of God is as unimaginable as one’s own nonexistence. So if the title were true that would have to be because atheists woke up to the nature of the question and realized the case for no God cannot be made on the basis of evidence any more than the case in favor of God. Then there would only be believers and agnostics, some of whom would not resonate with the idea that God’s nearness was at all likely. Or, like myself, some agnostics who can appreciate grounds for that apprehension of God’s nearness but be inclined to think it has other grounds than the existence of a timeless powerful being meeting any of the descriptions by which it has been known.

Atheism will never die because there will always be the typical denialist who will even a priori forbid the thought of the existence of the supernatural, regardless of the evidence for God’s providential M.O.

I had to look up Sarah Salviander, but it look like she is certainly a YEC!

As far as I can tell she holds to some form or other of day-age creationism. She appeals to special relativity to try to equate six 24 hour days with billions of years:

Was the universe created and developed in just six days? Is it possible to reconcile a literal interpretation of Genesis 1 with a billions-year-old universe? We address these questions in the follo…

That sounds like it might be compatible with Gerald Schroeder’s relativity days (I think it’s kind of fun, but it doesn’t really solve any problems): 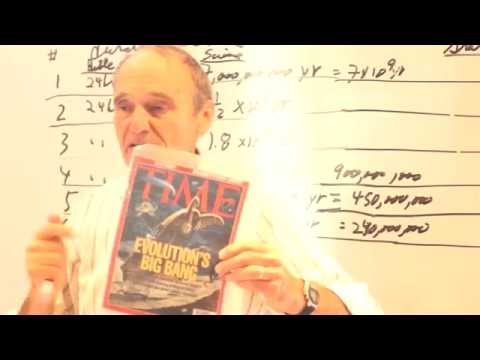 Duh, and now that I follow your link, she mentions him first off. ; - )

Atheism will never die because there will always be the typical denialist who will a priori forbid even the contemplation of the supernatural existing, regardless of the evidence for God’s providential M.O.

I don’t quite get why an atheist couldn’t just say, Christianity or religion will never die because there will always be the typical x, y, z who will a priori turn to supernatural explanations for everything because our brains are built to seek patterns even when there are none.

Personally I’m generally surprised when I see apologists with advanced science degrees described as YECs, unless they’re affiliated with one of the young earth ministries or waxing lyrical about favourite YEC talking points such as radiocarbon in diamonds, soft tissue in dinosaur fossils, or Mount St Helens. From what I’ve observed, various forms of old-earth creationism and day-age concordism are far more common among evangelicals trained in the physical sciences. Another indicator here is if you see any mention of Hugh Ross or Reasons to Believe – that’s an indication that you’re dealing with someone in the OEC/day-age camp. YECs usually don’t even acknowledge their existence, unless they’re explicitly trying to warn their audience off of them in the name of avoiding “compromise.”

I don’t quite get why an atheist couldn’t just say, Christianity or religion will never die because there will always be the typical x, y, z who will a priori turn to supernatural explanations for everything because our brains are built to seek patterns even when there are none.

Sure, they can, but they shouldn’t straightaway seek to be detectives looking for evidence of a personal M.O. if they going to choose to ignore patterns when there are repetitive ones.

Is anyone else having trouble with this? On my older iPad, every other slide is black after the first three:

I had to look up Sarah Salviander, but it look like she is certainly a YEC!

Take a care there. I do a little Twitter, and have seen her there. She seems strong on faith, and also seems to take science seriously. She doesn’t look YEC there. My guess (and it is only a guess) is that she is approximately TE/EC. But I don’t particularly like these guessing games.

As far as I can tell she holds to some form or other of day-age creationism.

Yes, my remark was premature!

I was composing as you posted. Yes, I need to do some more reading.

The definitive book has finally been written on the existence of God?
Or a hideous plot is about to be undertaken?

The title sounds silly to start with. As a librarian (and reader) nothing about the title would compel me even to look at the blurbs. The author not so much, either. Metaxas’s book on Bonhoeffer didn’t win him awards for accuracy in handling Bonhoeffer’s theology. Political associations of his lead me to wonder … a number of things.

Mediocre reviews on Amazon (I usually go straight for the worst ones) are telling:

God bless the readers who stuck it through AND wrote reviews.
I can’t get past the front cover. Sorry.

Mediocre reviews on Amazon (I usually go straight for the worst ones) are telling:

God bless the readers who stuck it through AND wrote reviews.
I can’t get past the front cover. Sorry.

I’ve just had a look at the one, two and three star reviews on Amazon.

Is anyone else having trouble with this? On my older iPad, every other slide is black after the first three: