Are Philosophers like Edward Feser and Alister McGrath Worth Listening too?

I have heard alot about Edward Feser when I was searching for books on the philosophy of Mind and after looking him up I saw that National Review called him one of the best modern philosophers of our time. But it seems to me like some Atheists think his arguements are foolish or ignorant, like Rationality Rules or the one who Reviewed his book the Last Superstition. So tell me what do you think about him, Is he worth my time or not, and if not who do you think is better? Same With McGrath I am interested in his books about Dawkins

Edward Feser is a Thomistic philosopher. He deals in the “ways of old” really. Lots of the arguments for God and stuff he deals with is seen as outdated and doesn’t move many people. However, I am almost certain that these atheists who say his arguments are whack haven’t a clue what they are talking about. Thomas Aquinas wrote a whole lot. And it was not aimed at amateurs. It wouldn’t surprise me if half of the people who criticize Ed haven’t even touched his books with decent understanding.

Ed is a big authority on Aquinas (Classical theism) because he’s studied it and fully comprehends it. Many philosophers nowadays don’t want to study it because, as I said, Lots of the stuff is viewed as outdated. (Aristotelian mechanics or Neo-Platonism.But mostly because of irrelevance to their field.)

Read him if you are willing to dig deep and truly understand the notions that are presented. Another thing that I would suggest is not to view the entire God discussion as a debate. Talk to atheists and seek to learn. You’d be surprised that a whole lot of them aren’t as dogmatic about things as the new atheists or /ratheism folk seem to be. Don’t waste your time with youtube atheists and theists (except for cameron bertuzzi’s channel in which he actually lets authorities on both sides engage eachother.) But read the contemporary and historical cases and viewpoints. The amount of stuff that you will learn in those far surpass what you will ever learn on those videos. I personally feel like you cannot have a true opinion about God until you have.

If you haven’t done so yet, you might want to pick up a history of philosophy book first. Or a beginners course on logic. I made the mistake to never do this and still think I would be able to engage arguments. Which is silly now that I look back on it. You can’t jump into the river without first learning how to swim.

Thank you for your reply and input.

I forgot to mention that, although the notions are deemed outdated. Ed is arguing that they aren’t. And is trying to revitalize it all. I don’t know if it’s working though. 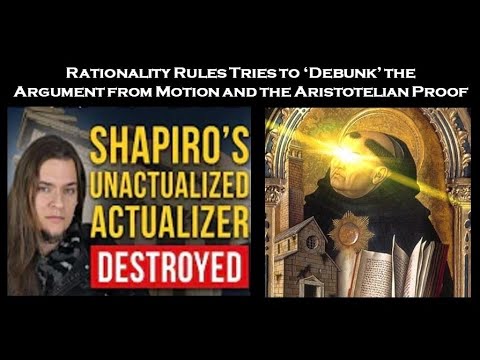 I don’t know what “whack” even means. But if an atheist calls them stupid, I guess I would agree that they don’t know what they are talking about. But that doesn’t mean these arguments are sound or convincing.

As for me… I am not only a Christian but I have read Aquinas. He is very methodical and reminiscent of Aristotle. But there is no way of getting around the fact than any argument relies on the acceptance of premises and that is where they all fail to be objective. If you don’t find the conclusions reasonable then you just challenge the premises which the argument relies upon. So no I don’t see how any of these arguments can ever give you a reasonable basis for expecting others to agree with you. The only people these arguments sound convincing to, are those who already agree with the conclusions. And the reality is that even if the conclusions are correct this doesn’t mean the argument is sound (for that requires the premises to be accepted as true). And I feel there is a real danger in these arguments of replacing the correct conclusion with premises which are ultimately wrong.

Well… what is the basis of comparison? If they sound good then how are these arguments any less convincing than anything else. The comparison we can make is to the objective basis of science which is the fact that its conclusions are based on written procedures which give the same result no matter what you may want or believe. That is demonstrability. And these conclusions are routinely tested over and over again with every aspiring scientist seeking to understanding these conclusions and looking for something which they can contribute themselves.

If you haven’t done so yet, you might want to pick up a history of philosophy book first.

Some philosophers are more helpful than others. Aristotle, Kant (and yes Aquinas too) are fairly comprehensible. I also like Camus and have long been a bit of an existentialist. C.S. Pierce isn’t bad either.

P.S. What I have seen of Edward Feser so far looks pretty good to me.

I don’t know what “whack” even means.

When I taught high school I was regularly told that my class, grading system, assignments, and general personality were whack. So obviously it’s a huge compliment.

The online slang dictionary suggests otherwise, but maybe this is one of those slang words where nobody really knows what it means or it varies from place to place. Sometimes it seems such slang words are employed for intentional confusion. I cannot see how meaning reversals such as in the slang usage of “sick” could ever serve any purpose but perverse confusion.

I was joking. Pretty sure it’s kind of an insult everywhere. I would paraphrase it as messed up.