Species & Kind - How many KINDS are in Whale Evolution?

you can see that basilosaurus did have a femur and tibia. but it was a fin and not a leg. so the same for the whale.

If you go back into the fossil whale record … you will see whales and proto-whales with all sorts of combinations of limbs … This is because mammals had 4 limbs… and it can sometimes take more than millions of years to genetically lose something you don’t need.

The point that was raised in this thread is that some MODERN WHALES have under-developed femurs that are completely buried in their tissues … so they don’t exist for swimming or mating or anything. They are just laying their dormant … because there was a time in whale gene pools when they NEEDED their rear limbs.

QUOTE 1:
The existence of a pair of small pelvic bones is known to exist in nearly all of the Cetacea, lying far apart from the vertebral column on both sides of the genital opening.

However, in the Fin Whale, the Blue Whale, and the Humpback, the femur too is present near the pelvis. [Even in the Sperm Whale the femur is sometimes present (in the form of a small round-shaped bone near the pelvis). - E.T.B.]

And in the Right Whale not only the femur but also the tibia exists. Of course these bones are buried deeply under the skin, causing no protuberance on the body surface."

“Nothing can be imagined more useless to the animal than rudiments of hind legs entirely buried beneath the skin of a whale, so that one is inclined to suspect that these structures must admit of some other interpretation. Yet, approaching the inquiry with the most skeptical determination, one cannot help being convinced, as the dissection goes on, that these rudiments [in the Right Whale] really are femur and tibia.”

“The synovial capsule representing the knee-joint was too evident to be overlooked. An acetabular cartilage, synovial cavity, and head of femur, together represent the hip-joint. Attached to this femur is an apparatus of constant and strong ligaments, permitting and restraining movements in certain directions; and muscles are present, some passing to the femur from distant parts, some proceeding immediately from the pelvic bone to the femur, by which movements of the thigh-bone are performed; and these ligaments and muscles present abundant instances of exact and interesting adaptation. But the movements of the femur are extremely limited, and in two of these whales the hip-joint as firmly anchylosed, in one of them on one side, in the other on both sides, without trace of disease, showing that these movements may be dispensed with. The function point of view fails to account for the presence of a femur in addition to processes from the pelvic bone. Altogether, these hind legs in this whale present for contemplation a most interesting instance of those significant parts in an animal – rudimentary structures.” [Struthers, p. 142-143]

[Struthers, John, M.D., Professor of Anatomy in the University of Aberdeen. (1881) “On the Bones, Articulations, and Muscles of The Rudimentary Hind-Limb of the Greenland Right-Whale (Balaena mysticetus).”]

In spite of all the evidence of femur and tibia bones that I and George have cited and provided links for, you somehow seem to think that an artist’s depiction of basilosaurus should allow you to ignore that evidence. Really? I’m feeling discouraged, like maybe somehow I’m such a poor writer that I have failed to communicate clearly. Or is the communication failure on your side? Maybe you are too busy to consider our evidence? I would understand that, I am pretty busy at times, too. But if you are too busy to examine the evidence we cite, how is it that you have the time to respond in the thread? Or maybe you’re distracted by the vicissitudes of life? ???

Regardless, before you do anything else, please read the eyewitness observations of leg bones that I wrote about here. Please read the George’s evidence of vestigial, visually hidden whale leg bones here.

Have a blessed day.

After a good night’s rest, my friend dcs, I think I’ve identified the source of confusion. You seem to be believe that paleontologists should build their analysis of morphology on the imaginative renditions of artists, rather than the actual fossil bones.

This is of course not how scientists do their work. Scientists analyze the fossils, not the art… Then artists have the task of imaginatively depicting the result. The art is useful for science learners, because (when it’s accurate) a picture is worth 1000 words.

In the case of the Basilosaurus artistic renditions you keep appealing to, it seems the artists have done a poor job of rendering the hind limbs. So let’s do a little scientific analysis here by comparing Basilosaurus hind limb fossils with predecessor fossils and then with the skeletons of modern right whale vestigial hind limb bones. We’ll array them from earliest to latest and see if Basilosaurus hind limbs are in an evolutionary sequence. We’ll start with the Pakicetus hind limbs as photographed by Kevin Guertin from Ottawa, Ontario, Canada - DSCF1201, CC BY-SA 2.0. Pakicetus lived 60 mya.

Now Basilosaurus (40 mya) from the same source that provided one of your artistic renditions:

For scale and clarity, here’s another basilosaurus image:

I should add that basilosaurus is not thought to be directly on the cetacean lineage; it seems like an evolutionary dead end. A late Eocene contemporary like dorudon is closer to the evolutionary lineage. But basilosaurus is close enough for us to draw the conclusion that it is part of the family tree that leads to modern whales.

your argument was that femur and tibia are evidence for leg. so i showed clearly that it isnt true and those structure can be seen in fins. case close.

you somehow seem to think that an artist’s depiction of basilosaurus should allow you to ignore that evidence.

not even according to evolutionary whale expert Philip Gingerich:

‘It seems to me that they could only have been some kind of sexual and reproductive clasper."

again- not legs but a part of the reproduction system. add to this the fact that in rare cases dolphins have an extra back fins in the same place of those “legs” and you will get the right picture.

your argument was that femur and tibia are evidence for leg. so i showed clearly that it isnt true and those structure can be seen in fins. case close.

So let me get this straight … you are saying that modern whales that have an internal bone structure is NOT an evolutonary remnant from when these mammals had rear legs? And that …

EITHER WAY, DCS, that’s evolution…this is the NORMAL state of these modern whales in question … this is not some rare aberration.

its not evolution but degeneration. the whale lost its back fins.

the whale lost its back fins.

So you agree that modern whales have ancestors who possessed legs, but over time those legs were lost. Interesting. And exactly what George and I have been saying, by the way.

So you agree that modern whales have ancestors who possessed legs, but over time those legs were lost.

not legs but fins.

Case never opened. To have a case, or better yet a discussion, we both need to discuss the same evidence/data. But you have essentially spat upon the photographs/graphics that I labored long and hard to present.

in rare cases dolphins have an extra back fins

Dolphins diverged from whales roughly 40 mya. Of course there are differences between them. Yet you seem, incredibly, to believe that everything about dolphins must somehow be identical to whale counterparts.

You refuse to examine evidence from whales, and instead draw conclusions about whales from their distant cousins, the dolphins. Would you conclude a man named Chris is a felon because his sixth cousin Engelbert once committed a murder? Or would you say that you need to look at the evidence specific to Chris? You need to start looking at the whale evidence. Repeating over and over that dolphin evidence tells you everything you need to know about whales, so you don’t need to look at actual whale skeletons, convinces no one.

‘It seems to me that they could only have been some kind of sexual and reproductive clasper."

again- not legs but a part of the reproduction system…

I would also ask: do other species make use of their legs during sex? How about homo sapiens, for example?

In other words, dcs, the only way you can even attempt to construe Gingerich’s statement as proof that Basilosaurus hind limbs were not legs is to add on several other statements which are, to put it mildly, nonsense. And you arrive at a conclusion (part of the reproduction system) that contradicts yourself (fins), without even realizing it.

But here is more proof that Gingerich believed the Basilosaurus hind limbs were legs: he wrote an article entitled “Hind Limbs of Eocene Basilosaurus: Evidence of Feet in Whales,” Science 249, July 13, 1990, p. 154. Feet attach to legs, do they not?

not legs but fins.

its not evolution but degeneration. the whale lost its back fins.

DCS, really? You are going to argue that Whales are a DEGENERATE creature … rather than accept the reality of evolution? The fact that whales are perfectly designed to plunge deep into the ocean … and live a completely aquatic life (because of these degenerations) means nothing to you?

There’s really no point in discussing any of this further with you.

I think the next thing you will say is that apes are DEGENERATE DINOSAURS.

I think the next thing you will say is that apes are DEGENERATE DINOSAURS.

You mean they aren’t DEGENERATE DINOSAURS?

You refuse to examine evidence from whales, and instead draw conclusions about whales from their distant cousins, the dolphins.

lets be serius chris. i gave several evidence that dolphin never had legs but fins:

i already link to an article that saying it may have several functions. we just dont know for sure.

In other words, dcs, the only way you can even attempt to construe Gingerich’s statement as proof that

i guess you miss this article: 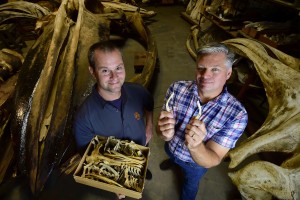 Whale reproduction: It’s all in the hips

it may be my last response in this discussion.