Is genesis one about the original creation?

I don’t believe in a young earth. I don’t even believe in the old earth. I am definitely a theistic evolutionist. Satan definitely did not fall before genesis 1. It’s not even until the New Testament that the snake is referred to as the snake. I don’t see any scriptural evidence to believe Satan was created prior to the rest of creation or that he was at war or already defeated in the Torah.

However, I don’t see any way to better explain what I wrote already. It’s just regurgitating the same old arguments. For me it’s my clue to bounce out when a discussion is just me and the other person repeating the same things again and again.

I’m in touch with some of the top evolutionary entomologists in the world and not one of them KNOWS what any insect “evolved” directly from. It turns out nobody KNOWS anything about evolution. In the famous conference of evolutionists in Chicago, the question was asked: “Does anyone here KNOW anything about evolution?” There was silence until one evolutionist said, “It shouldn’t be taught in schools!” That’s ALL they KNOW about evolution by their own admission! Everything concerning evolution is based on assumptions–not knowledge! When I asked James M. Carpenter, top wasp expert at the American Museum of Natural History in NYC, Do you know the direct ancestor of any insect? He said, “No is certainly the answer to that question.”

To the OP. Genesis 1 belongs to the genre of cosmogonic myth common to ancient cultures. It taps in to the realization that things have no always been so, that our records and artefacts and stories and memories only go back so far.

It is beguilingly, beautifully humane for its genre. Highly evolved, but cannot possibly reflect the facts of cosomolgy: that there is no beginning of beginnings, no origin of origins apart from, possibly, God being the eternal ground of being from eternity.

Think the Greek word is “abyss” which plausibly refers to the vast dark abyss of deep space ??

I understand the Koran claims the Devil rebelled when the God revealed His plans for humanity to the heavenly host of angels, requiring they all bow to Adam (humanity?) as His “vice regent” on earth

The Adversary, as a higher heavenly being (made of fire not earth) refused to bow to a lower one, and his assault on Eve in Eden was the opening move in His uprising (designed to make humanity bow to him, as opposed to the other way around)

How would even Persian influenced C6th BCE exilic Jews know anything about deep space? Or deep time come to that?

They wouldn’t, but godlike heavenly beings could (hypothetically) tell them

It would be an example of superhuman, supernatural knowledge, implying the existence of an informing, heavenly, Power?

It would if it were explicit in the text and the dated text, but no such explicit exists in any ancient text.

if it were explicit in the text

explicit how? What ancient Hebrew word meant “deep space” ? Even the God in heaven couldn’t be explicit when limited to ancient human pre-scientific vocabulary?

Between heaven & earth is the dark abyss, resembles deep space (?)

If God wanted to be explicit, He would have been. If He wanted to use M2nd or 3rd (Millennium) BCE idiomatic Hebrew to describe scientifically accurate phenomena, what could have prevented Him? Using ancient Hebrew numbers he could have dictated the reciprocal of the fine structure constant to 137.035999174(35)

Otherwise we’re just looking down the wrong end of the telescope and projecting now, then.

Neither Jesus nor the Apostles considered the Genesis creation story a myth. It is well-known that no animal can exist unless God creates it. All the scientific brains combined can’t create life and certainly it can’t happen by brainless methods.

Jesus believed all sorts of things He couldn’t not; He was fully human after all and His divinity could not transcend His epistemology except morally, in the light of Love. Even that raises questions. Well known by whom? I thought animals had sex? Yeah, it takes a wet, volcanic planet.

In a scientific inquiry, every answer found unlocks dozens more questions. That is the humbling thing about the acquisition of real knowledge. It is only in fiction and religion where you decide what the questions are so you can supply all the answers. One of the things we have discovered in biology is that there are so many species of insects that we constantly discover new ones. There are more than a million already found and described in texts and we estimate that there are between six and ten million of them in all.

So does the fact that we don’t know everything about insects mean that insects don’t exist? Sounds like a pretty silly argument, right? Insects are all around us. To be sure there is more that we do not know about most things than we do know. Does this somehow invalidate what we do know? If we walk into a room and part of it is blocked by a screen, then does the fact that we do not know what is behind the screen somehow invalidate the information our eyes receive about the rest of the room? It is hard to imagine a more silly argument. Likewise what we do not know about evolution does not invalidate what we do know. Certainly by picking the smallest type of animals, insects, with the most species, with no bones, and thus which leave very little evidence behind and talking about how much we don’t know about them and their evolution is one of the most bizarre and silliest arguments against evolution I have ever heard. The evidence of evolution is all around us in everything we look at… in ground, rock, and in the living organism themselves in their very chemistry.

And what sort of question is “what is the direct ancestor of a particular species?” It hardly makes any sense. Evolution is a process of continual change and so it is hard to understand what you can even mean by such a question. What we can do is look at the genetic information of two species and calculate when the common ancestor of those two species lived. But to find a fossil of that ancestor among all the millions of species of insects among the few fossils we have found would be a miracle. Just consider the numbers… 12,000 species of fossil insects out of six million species of insects would give you a probability of 2 tenths of a percent chance of finding a fossil for that species. And that is not taking into account the fact that many of those fossils are of species which became extinct and have no descendants.

So yeah… there is a great deal more that we don’t know than we do know. But as a famous person once pointed out that this is where true wisdom lies in knowing how much we don’t know (Socrates). And this is what you don’t find very much of in religion with their prepared answers for their made up question like in the bedtime stories which are made up for children.

I am not claiming the evolutionists should know “everything,” but that they should KNOW at least “something” about evolution and they admit they don’t. The point is; if they don’t even know one direct ancestor, they certainly don’t KNOW any distant ancestor! Why don’t we see any intermediate species now? Certainly, if evolution ever happened, it should be happening now! Yet it isn’t, which explains why nobody KNOWS a thing about evolution, which ALL of the top evolutionists at the Chicago conference admitted.

Creating a family tree that dates back more than 400 million years and details the evolution of the most diverse group of animals on the planet is no easy feat, but one ambitious group of scientists has done just that.

The first-ever comprehensive evolutionary tree of insects was recently created by a group of researchers from around the world. This phylogenetic tree, built from genetic sequencing and fossil data, helps explain the relationships between different kinds of insects across millions of years of evolution. 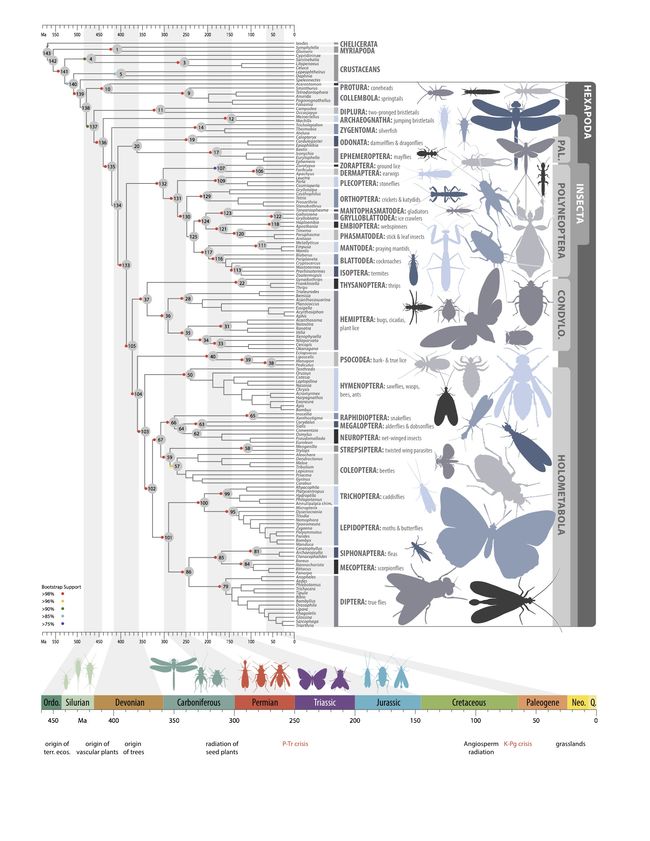 We know a lot. This wasn’t difficult to find. Took me a couple minutes. But then there are people who simply do not want to know or see or hear (Matthew 13).

What is not so easy to find is information on this alleged conference you talk about which I have no reason to believe is anything but a complete fiction.

As I pointed out elsewhere here, ALL Young Earth scholars believe the 1:1 creation is the beginning of Day One, The fact that God isn’t shown to speak (no action), in 1:1, isn’t the only reason I think it’s only a “Summary Statement.” Here are Young Earth Creationists rather forced and non-literal beliefs: 1) Last I checked, AIG considers “the heavens” in verse one to be “the invisible earth particles the sun, moon and stars would be made of on Day Four,” and “the earth” refers to the planet Earth." This would mean the angels in Job 38:4-7, that “shouted for joy” when God “laid the foundation of the Earth,” were created BEFORE the Six Days. 2) CMI on the other hand, thinks “the heavens and earth” in 1:1 refers to “the invisible earth particles the planet Earth, and the sun, moon and stars would be made of later.” In this belief, the account of the Earth’s creation is completely left out of Genesis!

Both Young and Old Earth Creationists agree; "The Hebrew does not allow for a gap between 1:1 and 1:2. See “Unformed and Unfilled (A Critique of the Gap Theory)” by Weston W. Fields, a YEC who quotes both OEC and YEC.

Why don’t we see any intermediate species now?

One thing also is look at all the small changes “adaptations” that we can see now. In just a century we can see a lot of changes. It’s not mind blowing to be able to see even more drastic changes over millions of years.

There is a fairly simple and reasonable explanation that is both scientific and theologically satisfying. Version:1.0 StartHTML:000000236 EndHTML:000000993 StartFragment:000000347 EndFragment:000000961 StartSelection:000000347 EndSelection:000000961 SourceURL:file:///C:/ProgramData/WORDsearch/Wordsearch%2012/Cache/copy_passage.html Genesis 1:1-4 (NIV2011)
1 In the beginning God created the heavens and the earth.
2 Now the earth was formless and empty, darkness was over the surface of the deep, and the Spirit of God was hovering over the waters.
3 And God said, “Let there be light,” and there was light.
4 God saw that the light was good,

What this says is this. In the Beginning of the universe God created what is called the singularity, which contained all the particles of matter and antimatter that would becomes the heavens and earth in a very small point. This was also the beginning of the Big Bang.

Then God said Let there be Light and there was light. Then the matter and anti-matter came together and there was Energy, Time, and Space.

The Genesis describes the Beginning of the universe, or the Singularity, as formless, empty, dark, the Deep. It was certainly that. The Hebrews used the Sea as a metaphor for Chaos.

The God said let there be Light or the Big Bang and the Singularity became the universe taking shape through time, space, energy and mass. E = mc squared.

Also this reconciles Science and Biblical theology and points to the necessity to reform Philosophy.