Wow. I saw the one of the Golden Gate with fires on the hillside at the north end.

Yeah, all the pictures that include the bay, the lights on the bridge are pretty dramatic. Today we’re getting some work done in the living area so we’re all hanging out in Lia’s studio. I’ve got a new date with the surgeon to get my knee replaced so I’m trying to set it up to be as self sufficient as possible before my big day. The younger one is literally a velcro-dog. He can’t close his eyes if some part of him isn’t touching some part of me … just in case. 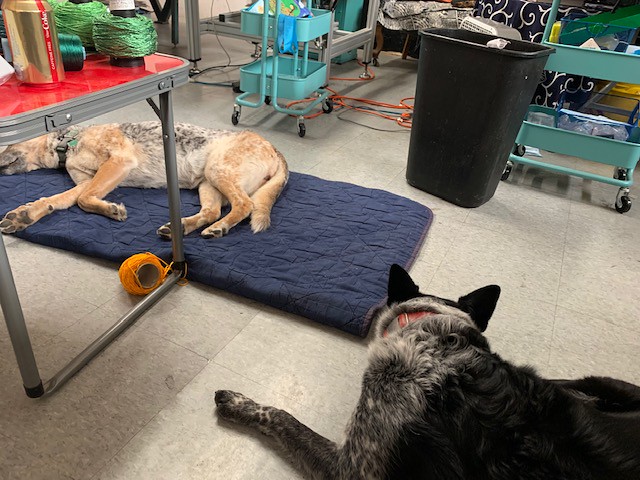 The milkweed assassin bug. Found him by the pool and moved him back near the woods. Placed him on a vomit holly also known as the yaupon.

They resemble what we call boxelder bugs in Nebraska. They tend to swarm in the fall.

On the other hand (gloved, I hope

Beware of the caterpillar: Anaphylaxis to the spotted tussock moth...

We present a case report of a 5-year-old boy with presumed anaphylaxis to the caterpillar, Lophocampa maculata, manifesting as the acute development of diffuse urticaria and progressive dyspnea. This reaction required prompt treatment with...

They are similar looking. I’m not sure if I’ve seen the one you’ve mentioned before.

Neat. The western interior variation of the caterpillar. Looks a bit different from the eastern one. It’s on its way to becoming a subspecies I imagine.

A little friend found while mowing the grass. As near the play set, will relocate a way from the house, though coral snakes are pretty shy and generally only bite if handled. Kids may not restrain from handling though.

Ooh, in at least two senses of the expression.

Another , this a pipevine or blue swallowtail

An assortment of pictures. Some not so good because my phone is not great for nighttime photography, and if it is then I’m not good at it lol.

Some species of caterpillar. Then because where I live there is no power from the hurricane it feels cooler outside than inside. So I went on a walk to a cemetery and it’s where I’m actually going to spend the night. Looking at the stars, and enjoying a part of creation not often mentioned and it’s the “gothic” beauty of the places where we bury our deceased. Though this particular one needs a ornamental makeover. Also a woodpecker of some kind.

What I can’t capture on the video is the beauty of “ghostly” wispy slightly see through clouds blowing across the sky. There are dozens and dozens of more stars than visible in the images. The sound of the leaves blowing from the wind.

Prayers for you guys and hope power restored soon.

Thanks. Where I’m at they think it will be another week or two. I am lucky I like the outdoors and go camping so much because I was mostly not prepared. So many come through here so much stronger than this one I did not think much about it. A tornado ran through my area and two trees fell on my house, a 50 foot longleaf pine and some 30ish foot tall slash pines and a oak fell on my pole barn and smashed it right down the middle. Seven more fell on my street snapping lines and poles. On my property all together 20 something trees were snapped or fell. Luckily, by the grace of good, the next week is all in the low 60s at night and only 74 during the day and so it will be really cool. I’m basically just camp for the next week. Plus I have three commercial grade generators that can run my entire house. Because many gas stations are not up and some ran out, when one opened today I went and got 130 gallons of gas in big barrels and I have a hand pump. So I’m set no matter what. Way better off than some. Many don’t have a generator.

So sorry for the damage but happy you are OK. Wish we were a little closer to help with clean up. Several in our church work with Texas Baptist Men on chain saw crews.

I have been helping here too. Monday through Saturday I only do it through my business. I have trailers and generators and do work. Then on Sunday, I drive around for free in areas that are further away from down town that typically gets fixed last. I cut up trees out of driveways and on roads to open it all up. Lots of people living on dirt roads in the woods that can’t leave and so I try to focus on those areas for free. Monday through Saturday I focus on middle class and upper class areas and charge. To me even if that’s not perfectly fair, it’s what I feel ok with. I try teach others I meet that are helping how to do it correctly. So many just barely open the roads up. I tell them go a bit beyond so that the power companies can drive up and down. Put everything to one side of the road and carry it. Don’t just make to small piles going along the whole road. It takes more work, butnin the end it will allow power companies to bring their larger vehicles in without pending hours cleaning up the mess.

The coral snake is very cool but I’m gaga over pipevine swallowtail butterflies. In fact with the air improved around here I went up to the UC Berkeley botanical garden today and gloried in the plant kingdom. But I was restrained in looking over the plants for sale, settling on two more Aristolochia californica starts. I’m determined to host a swarm of these guys if it takes forever.,

Ooh – I just looked up photos of them and those butterflies are gorgeous!

I saw my first ones in Sonoma, north of San Francisco, at the Hallberg Butterfly Gardens where I found this video from April. In this video from their site, there are images of the pipevine swallowtail in flight at 0:56 and again at about 1:43 when they show the larval food source and a mother depositing eggs on it. 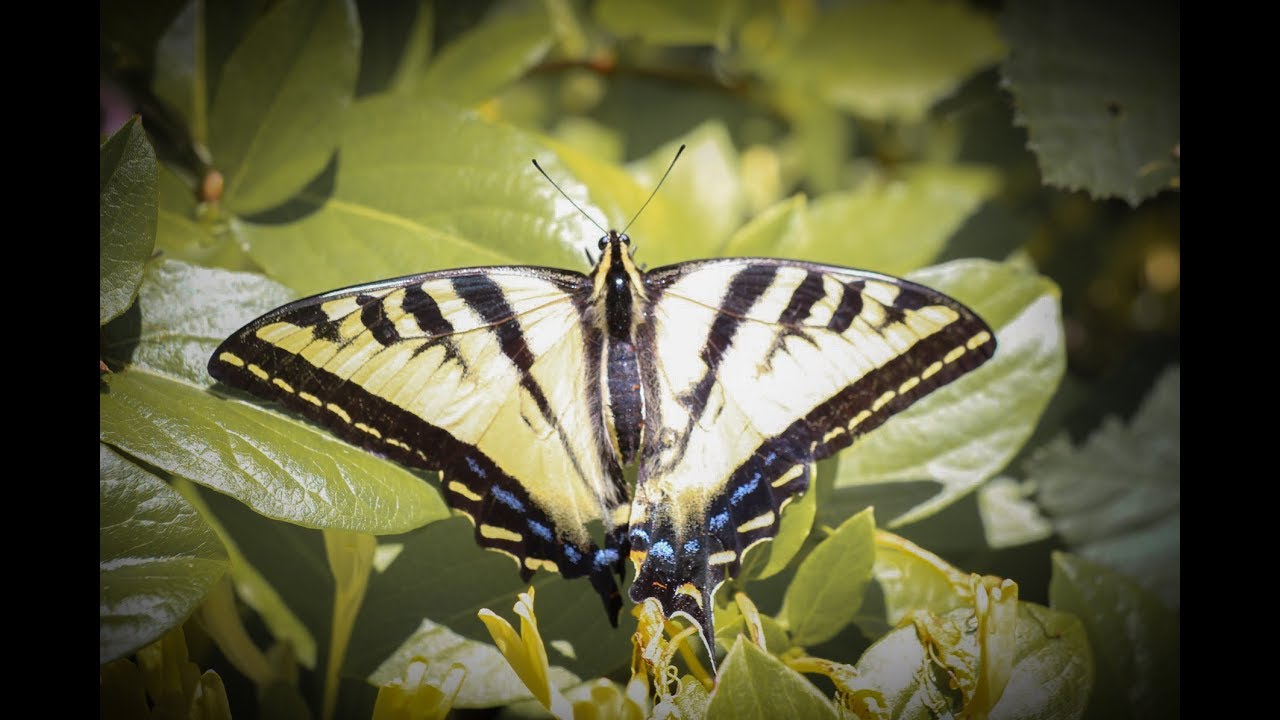 I’ve also met Tim Wong who is a biologist at a garden party of a young couple who are as deep into plants and gardens as I am. I subsequently ran into him at the San Francisco botanical garden where he has established a section of the garden devoted to the plants the larvae require as well as those the adults favor feeding on. That place crawls with their larvae at parts of year and you see more of the adults there than anywhere else I’ve been.

This video of Tim at the S.F. Botanical Garden is even better. 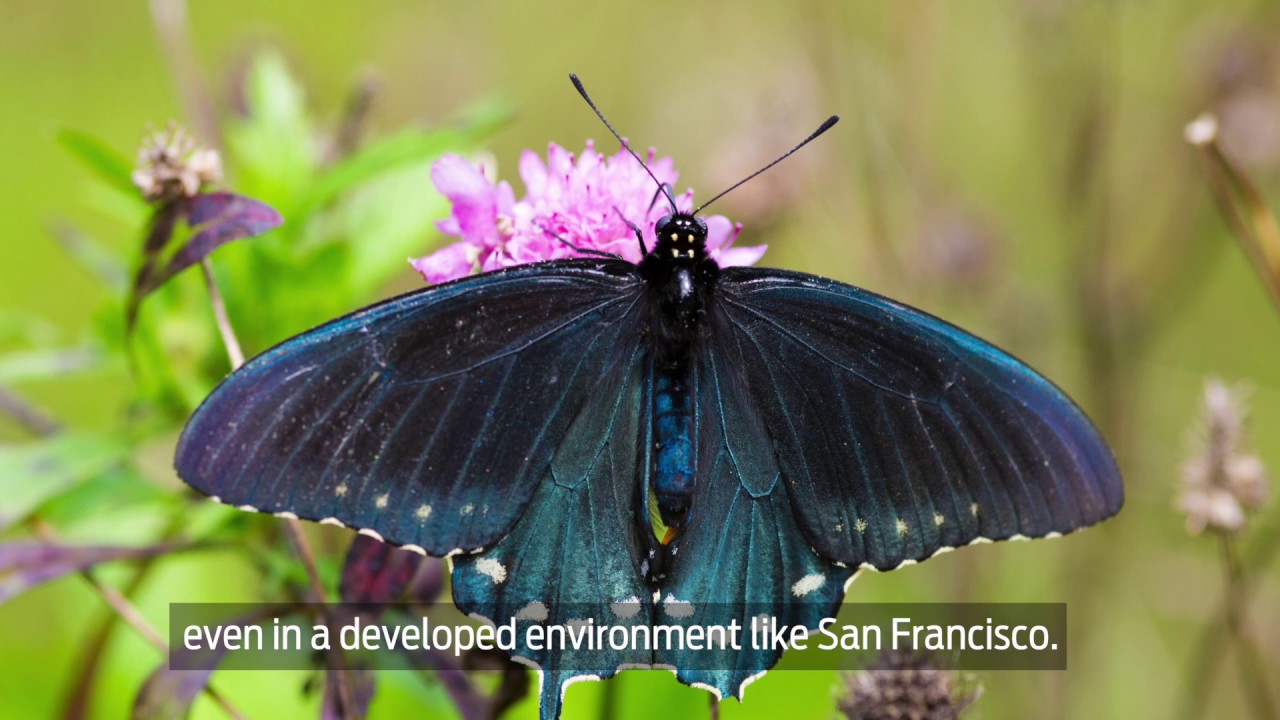