Never heard of such a thing. Do they burrow?

Native to Asia and Madagascar , the hammerhead worm, or Bipalium Kewense, was transported to Europe and the United States in shipments of exotic plants. It has been in the United States since the early 1900s and is most commonly found in states such as Louisiana, where conditions are warm and humid.

kewense can be killed with orange essence (citrus oil), and salt (as with slugs and snails). They can also be sprayed with a combination of citrus oil and vinegar; or just vinegar alone and it must be applied directly on the flatworm.

Because they feed voraciously on earthworms, which are critical for their role in aerating and fertilizing soil , hammerhead worms are considered a threatening invasive species. Native to Southeast Asia, hammerhead worms have been found in parts of the United States since 1980 and have become invasive around the world.Mar 30, 2022

You bet. Something I should know about with my horticultural tendencies.

I find them all the time working on ponds completely underwater. It’s why made it mandatory to clean all gear on the site it was used and all bags sit completely tied with debris for a week before moving it to compost.

My daughter loves sunflowers–these are about 10 feet tall; goldenrod on the north country trail, some kind of coral fungus I think, a sunrise from our front yard, red and yellow funguses of some kind, partridge berries, and a woodpecker feather on the path in a wooded city park.

Incredibly gorgeous shapes and textures!
Don’t critter paths into the weeds feel like an invitaiton?!

Randy! Where did you pick up the North Country Trail?! I saw a segment of it for the first time in the Porcupine Mountains a few years ago (only time I”ve been that far in MI). I know it really meanders, though.

It is pretty! I have not been to the Porcupines–that would be beautiful. Thanks

I will have to try to fit in a visit to the trail next time I’m on the west side! Thanks! The Porkies are amazing, and of course there’s Superior and the fabulous remoteness and all kinds of waterfalls.
Loads of falls in the Marquette area. I need to get into some kind of shape again so I am ready, when we can go up and tromp in the woods. I adore getting filthy, climbing over trees and rocks. Tennis shoes aren’t the most supportive, but you don’t ruin them getting them soaked in the shallows either.
Don’t have a clue about camping. If I did’ I’d do some on the NCT and other places in the UP. It’s so beautiful. The thought makes my heart race.

My sister and brother in law really enjoy the NCT too–they hiked it for 2-3 days a couple of years ago. They saw a bear (who didn’t seem fazed by their presence), and a beaver, I think. I’m not good at camping, either, though. I really enjoy the trail running shoes from Merrell–my wife recommended I get them, and they have really helped in winter tramps, too. Your husband and you would love this; should meet my and my wife and kids sometime, if you do come here. Thanks.

Oh, wow! Randy! That would be terrific. I think you and Scott would really enjoy each other.

Thank you for the sun up! For a variety of reasons I missed it here.

I’m not good at camping, either

We used to do a number of camping trips every summer when Kalle was still at home. He still does and more ambitiously than we did.

When Lia and I first met my camping aesthetic was abysmal. A can of raviolis and a small can opener and a water bottle was about it. With a wife and kiddo I took my cues from her and got decent equipment including sleeping bags, foam mats and tents. Felt like a Sherpa hiking but then camplife was better. Around the campfire (when conditions permitted) we’d sing all her old family favorites like Down Yonder Green Valley and Spit On Bill as well as all the show tunes anyone knew. But as my sleep apnea became more pronounced a night in the tent felt like intermittent napping and then the days would also include numerous naps. So I have retired from sleeping (intermittently) on the ground. Heck I can barely endure laying in a good bed six hours, what chance would I have on the ground? Now we set up base camp in a motel or lodge and do day hikes, and since the pandemic we just do day hikes. I think we are on the downward side of the mountain but it’s been fun.

Came across this pic from March of this year while looking for something else. Seems like it is rare for me to get this range of light levels to play nicely together in the same photo. I’m not good enough a photographer to make it happen, just good enough to notice when it does. From my back garden facing north in the oldest part of the garden. 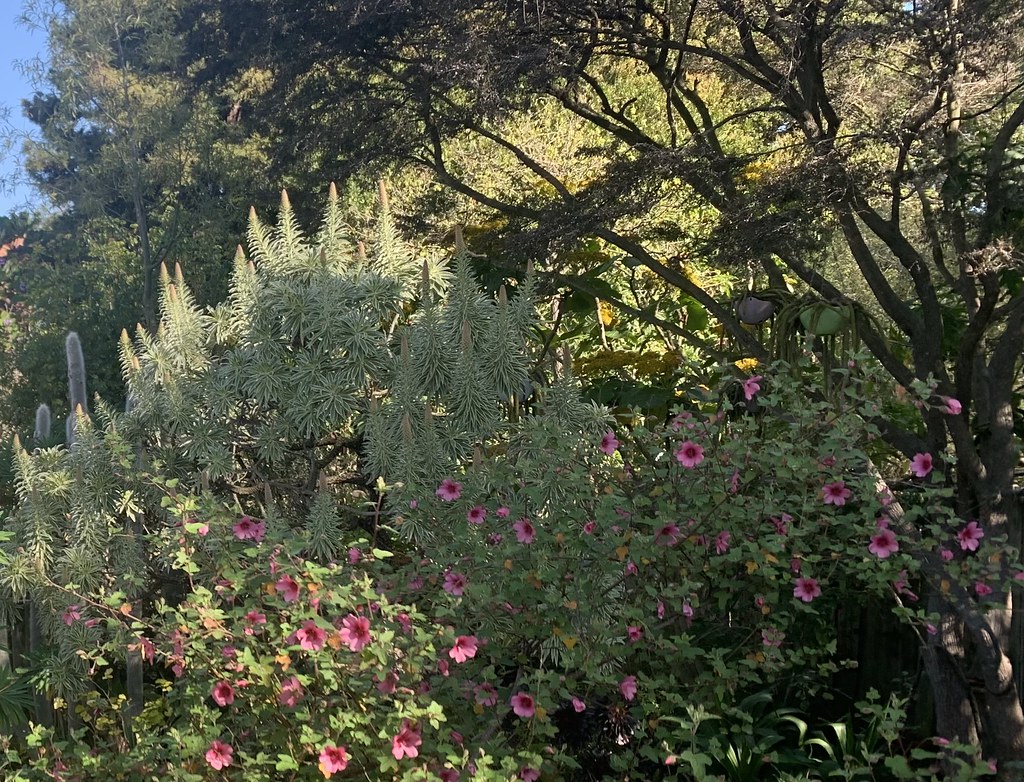 The dodder contains no chlorophyll and instead absorbs food through haustoria; these are rootlike organs that penetrate the tissue of a host plant and may kill it. The slender, stringlike stems of the dodder may be yellow, orange, pink, or brown in colour.
from dodder | Description, Parasitism, & Facts | Britannica

Some woodland pics as opposed to pine savannas and bog grasslands.

We often call it the “ vampire’s vine “. They even leave little puncture wounds before. But it’s so tiny it’s hard to get good pics of. The wounds are like the size of a ant’s head.

Nice stuff.
At first I thought dodder was like honeysuckle we saw in Arkansas, visiting my grandparents. That engulfs whole trees. You guys probably have it, too. It’s beautiful, blooming, while it’s killing a tree.
Mom brought cuttings up to Michigan and grew it on the fence in the sububs, where it really wasn’t a big deal. She offered me some, when we moved out to the country. I turned her down. We don’t need that getting loose.
Dodder sounds like honeysuckle but a whole lot worse.