Coronavirus: What you should know

My church has just gone to virtual services.

where is your church? We have webcasts of most services at my church.

My country has finally closed all schools and public events/places. In my opinion this has been handled extremely slow and inefficiently. My guess is that Belgium will be in the same state Italy is in, in a week. My thoughts and prayers are with my grandma and grandpa and other grandparents/elderly.

And i hope the government will get it’s stuff together from now on.

Also…I’m glad to be back once again Biologos!

where is your church? We have webcasts of most services at my church.

Near Boston. Things are moving fast around here, and are likely to start moving even faster. I just talked to someone who’s been attending the city-wide emergency planning meetings. They’re expecting grim stuff.

Because you have made the Lord your dwelling place— the Most High, who is my refuge— no evil shall be allowed to befall you, no plague come near your tent.
Psalms 91:9‭-‬10 ESV

And then I shared with them about patient 31 in South Korea who was intially linked to infecting 1,000 or so other people including hundreds at her church: How coronavirus cases exploded in South Korean churches and hospitals

This has led some to go silent and others to double down on their faith. Some local pastors are just boasting that they are not going to be shutting down their churches. I live in Virginia Beach.

Hey! How about some credit for early warning …

I apologize to Habakkuk for butchering his prayer:

Though the restaurant does not open
and there are no liquor stores to sell wines,
though the hand washing fails
and the shelves produce no sanitizer,
though there are no bottles of water
and no toilet paper in the stalls,
yet I will rejoice in the Lord,
I will be joyful in God my Savior.

WOOF that study. Sending to my preacher FIL now… 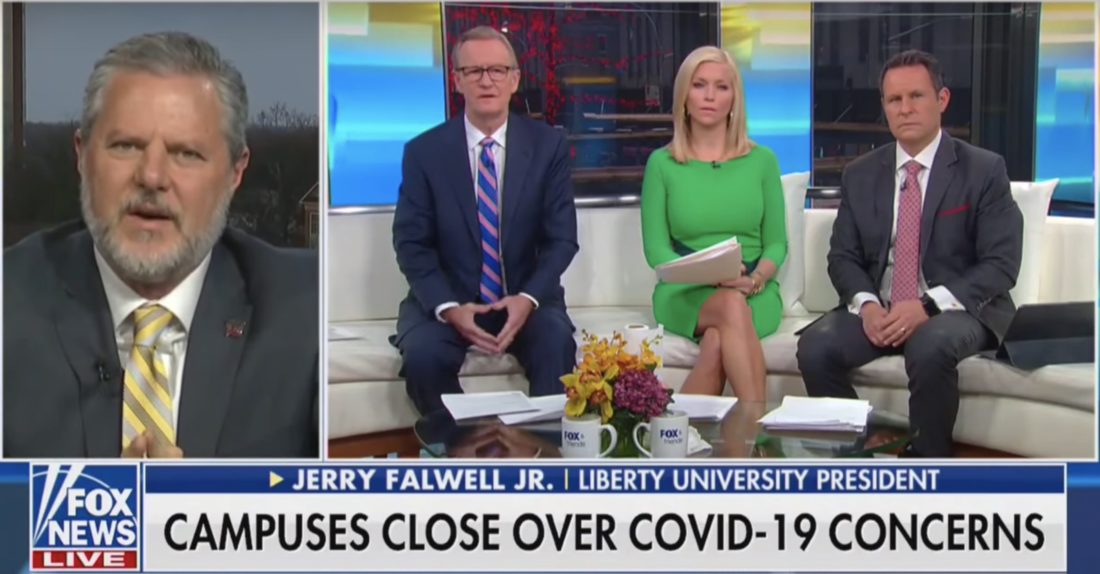 Liberty University President and Trump supporter Jerry Falwell Jr. went on Fox News to talk about the coronavirus pandemic for some reason. Ostensibly, Falwell was there to discuss the virtual…

Not to be ungracious, but that is about what I expect from Junior. Let him own it.

Note to self: better start wearing the hearing aides again.

I wonder what people think of going to the YMCA during this mess? I’m thinking of going wearing a mask for a Pilates class Sunday morning (with just the top threads tied). I expect it will be sparsely attended as it was last week. We attended a class last Tuesday as well but skipped Thursday. I would plan to scrub before and immediately after.

I expected the Y would close but it isn’t and some classes are still a go. The argument in favor of going is maintaining strength and vigor which could help if I do eventually get it. My wife is older and her health is already compromised so maybe we should really skip it?

You could get the free FitOn app and do pilates at home with only your own germs. I’m a big fan.

Please don’t take a chance. Remember that social distance is important. You could always go on a long walk outside.

@Christy, I think we will do that. We really like that teacher and class but until this blows over we’d better be cautious. I just hate to lose that routine. Heck I guess it’s time to bring my old, crappy stationary bike upstairs before my knee replacement in April. I’m just hoping they’ll still be offering an elective surgery like that; if the hospitals fill up, who knows?

@beaglelady, long walks are pretty much out of the question until I get that new knee. As it turns out my older dog needed a knee surgery last October and what she needs is frequent, short walks on leash at a slower pace so that she uses both legs equally. Made to order for what I can do for now. For the youngster, I can just take him to the park next door and throw him the ball with the chucker for 15-30 minutes and he’s satisfied.

I sure would like to get tested since I did have a fever, chills and a cough for a few days a week ago. My temperature has been normal for several days now but I’m starting to get a little bit of a scratch cough again. So for the past week I’ve set up in the guest room to shield Lia from catching whatever it is. We’re both washing hands all the time. She sure does not need to deal with that new virus.

I think we will do that. We really like that teacher and class but until this blows over we’d better be cautious.

Harvard, having sent all of their undergraduates home, is now in the process of suspending all but the most critical of lab research. In our lab we have some coronavirus-related work that will continue, but everything else is shutting down.

In our lab we have some coronavirus-related work that will continue, but everything else is shutting down.

You’ll enjoy this comparison. My wife is a senior program manager at the Univ. of New Mexico’s Clinical and Translation Science Center. Students aren’t returning from spring break until April 6 (if then). Cases at UNM Hospital, which is physically connected to CTSC, went from 2 to 5 to 10 in four days this week. My wife sent home a coordinator who came to work with a fever on Monday. Flu test was negative; Covid-19 test results may be available today. Meanwhile, four coordinators who shared an office with her had a fever yesterday, and the Vice Chancellor of the Health Science Center refused to allow my wife to send them home. Can’t shut down the clinic for two weeks. He’s a Trumpie.

Observations from a geezer.

Texas is now holding at 43 cases, which isn’t bad, but I looked at the last map I can find which locates each case rather than compiling them into state numbers. This looks like a petri dish and we are the petri. This map also suggests to me that this thing is going to get out of control here if we are not careful.

I am going to preface what I say below because I am on chemo and my immune system has been subject to dropping after chemo. I had chemo on Thursday, so I really really don’t want to be exposed.

Yesterday morning I went to my grocery store wearing a mask , about 9am to get 3 things, cereal, orange juice and berries. What I saw was amazing. Shelves were emptying rapidly There were only 5 orange juices that my wife drinks left–I bought 2. I bought the last 2 pints of real milk in the store so I didn’t buy more cereal as I don’t want to eat cereal with water. I spoke with the manager asking if the trucks hadn’t come in. He said they had but they didn’t have much. Thinking that a lockdown of 2-6 weeks might be necessary and thinking about what we had already bought a few weeks back (2 weeks of food), I bought other things for breakfast, bought some boutique hamburger patties and one of the last family packs of hamburger. Chicken was very low I bought some legs and thighs but that shelf was almost empty. There was no packaged cheese left. I bought 3 of the last 10 hotdog packs, some frozen pizzas, new stuff to eat for breakfast, and now think the two of us can last 6 weeks. I may have to stay home that long or more before this thing is over.

Is this panic? I don’t know. I do know I have a responsibility to my wife to keep her safe and that means keeping her fed. We don’t have much food but we have enough. I didn’t buy more than what I thought we might need for the upcoming sequestration.

Our church has shut down small groups but will hold live services at a campus I don’t go to, but will stream it online. I will watch online. I may have bought the last purchase of masks available to civilians back in January. Seeing this coming and being on chemo, I ordered them, was told I wouldn’t get them then they showed up.

Odd thing is we don’t have a single case in town yet, but clearly the supply chain to our small town is getting tenuous. I suspect bigger cities get first dibs. We are, as that Chinese curse says, living in interesting times.

Someone in the comments put a line to the date she declared the Coronavirus illegal:

Is this panic? I don’t know. I do know I have a responsibility to my wife to keep her safe and that means keeping her fed. We don’t have much food but we have enough. I didn’t buy more than what I thought we might need for the upcoming sequestration.

People in your shoes are exactly those who should stock up and stay home for extended periods. The people who are panicking are those who will be able to go to the store next week or the week after, yet they’re buying in bulk. Supply chains aren’t broken. They just won’t catch up right away. And I’m sure you’re right that big chains in big cities will have first dibs.

That map is sobering.