In honor of @Korvexius, and in honor of the entire week of the Sun’s hesitation of three days before it starts rising about 1 degree closer each day to its maximum southern Sunrise during the Summer Solstice, I thought this article by Greek writer Angelo Nasios would be a good read.

He describes the significance of the Sun’s 3 days of hesitation that marks the entire week of the Winter Solstice. But a modern astronomer’s summation of the time frame is found in the wiki article (link at bottom of page):

Unlike the equinox, the solstice time is not easy to determine. The changes in solar declination become smaller as the sun gets closer to its maximum/minimum declination. The days before and after the solstice, the declination speed is less than 30 arcseconds per day which is less than ​1⁄60 of the angular size of the sun, or the equivalent to just 2 seconds of right ascension.

This difference is hardly detectable with indirect viewing based devices like sextant equipped with a vernier, and impossible with more traditional tools like a gnomon[21] or an astrolabe. It is also hard to detect the changes on sunrise/sunset azimuth due to the atmospheric refraction[22] changes. Those accuracy issues render it impossible to determine the solstice day based on observations made within the 3 (or even 5) days surrounding the solstice without the use of more complex tools.

Accounts do not survive but Greek astronomers must have used an approximation method based on interpolation, which is still used by some amateurs. This method consists of recording the declination angle at noon during some days before and after the solstice, trying to find two separate days with the same declination. When those two days are found, the halfway time between both noons is estimated solstice time. An interval of 45 days has been postulated as the best one to achieve up to a quarter-day precision, in the solstice determination.[23].

In 2012, the journal DIO found that accuracy of one or two hours with balanced errors can be attained by observing the sun’s equal altitudes about S = twenty degrees (or d = about 20 days) before and after the summer solstice because the average of the two times will be early by q arc minutes where q is (πe cosA)/3 times the square of S in degrees (e = earth orbit eccentricity, A = earth’s perihelion or sun’s apogee), and the noise in the result will be about 41 hours divided by d if the eye’s sharpness is taken as one arc minute.

Astronomical almanacs define the solstices as the moments when the sun passes through the solstitial colure, i.e. the times when the apparent geocentric longitude of the sun is equal to 90° (summer solstice) or 270° (winter solstice).[24] The dates of the solstice varies each year and may occur a day earlier or later depending on the time zone. The solstices always occur between June 20 and 22 and between December 20 and 23 with the 21st and 22nd being the most common dates."
[END OF THE ASTRONOMY LESSON]
.
.
.

Hearth of Hellenism: The Restoring Light of the Winter Solstice

“As we sustain ourselves, the solstice and the ‘birth of the sun’ gives us hope for the increasing of light and the expectation of restored life. The ‘birth’ of Herakles Triesperos is celebrated after the winter solstice. Today, the Greek communities of Y.S.E.E celebrate Triesperos, as it is part of the common calendar we share. Herkales is called Triesperos (three evenings) because in myth Zeus stayed with Alcmene for three nights. He requested that Helios unharness his chariot for a day to extend the evening. This extension of night corresponds to the apparent lack of motion from the sun during the solstice. Herakles is in this regard a solar figure and his twelve labors correspond to the twelve zodiac signs.”

“Dionysus is also ‘born’ after the solstice. Dionysus has a solar function/affiliation with Apollo as they are closely related. Dionysus is ‘buried’ at Delphi and reigns there while Apollo is ‘away’ in the winter. When Apollo ‘returns’ to Delphi that occasion was celebrated as the Theophania, his ‘manifestation’. Dionysus’ birth and Apollo’s Theophania later became Jesus’ birthday (December 25th) and Theophania (January 6th) also known as the Epiphany in Christian tradition.” 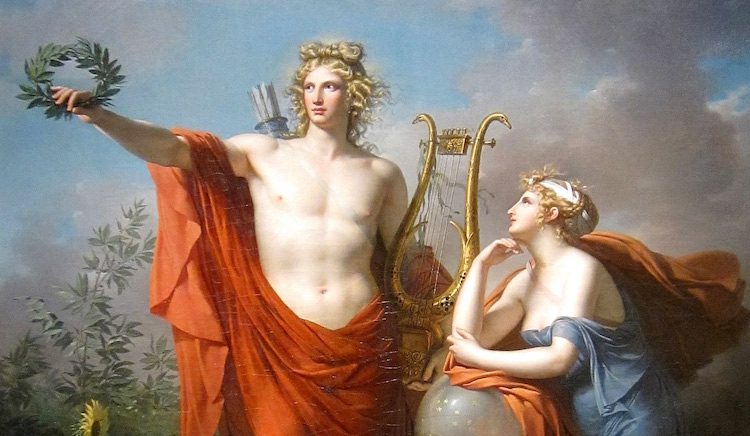 Hearth of Hellenism: The Restoring Light of the Winter Solstice

The winter can be a testing time. Learning from Poseidon’s nourishment of Demeter we should remember to nurture ourselves and prepare for the manifestation of Apollo’s light. The winter solstice (or hibernal solstice), also known as midwinter, is an astronomical phenomenon marking the day with the shortest period of daylight and the longest night of the year. It occurs when one of the Earth's poles has its maximum tilt away from the Sun. It happens twice yearly, once in each hemisphere. In the Northern Hemisphere this is the December solstice and in the Southern Hemisphere this is the June solstice. The axial tilt of Earth and gyroscopic effects of its daily rotation...

December 21 (today!) is my anniversary. I always tell my bride: “It was the longest night of my life!” At this point she just rolls her eyes.