What is your personal view of Genesis 1?

Personally, I currently lean towards John Walton’s functional/cosmic temple hypothesis, and certainly I am of the belief that the seven days (including the sabbath) are of theological/mystical, not scientific importance. The number seven was the number of days it took to inaugurate a temple. Seven was a sacred number amongst Babylonians and Hebrews, who identified the heavenly bodies with divine beings and noted that there were ‘seven’ moving heavenly bodies (sun, moon and five planets) in the sky. I see Historical Creationism and Anti-Polytheistic interpretations as possibilities also.

What is your view of the creation narrative?

The account is given from the perspective of Creation Itself, the heavens (including High Heaven) and the earth. Thus it was almost like a song or a poem with more than one voice. Verses one and two are just the set up and (https://earlygenesistherevealedcosmology.blogspot.com/2017/11/thesis-7-heavens-and-earth-were-created.html) are before the first day. Thus verse 3 on is is an account of God’s work ON the heavens and the earth, which He created in verse one.

The days (yom) are like “work days” to us. Each begins when God speaks and each ends when He says it is suitable. After the mid point of the third day the realm above and the realm below are separated. They do not equally respond to God’s Word. It happens quickly and perfectly up there, down here, it is a process and takes a loooong time and sometimes God Himself must help creation down here along.

That the phrase “evening and morning” is used without definite articles shows it is not a specific day, indeed a literal view of the phrase would be a night, not a day. It describes creation unwinding into darkness and chaos on its own, but the Word of the Creator brings illumination and order to whatever aspect of creation He is speaking to.

Regarding the creation of man, I have to much to say to even address here, but this is not just a single person being described being created but God fusing with humanity in the heavens into the Image of God. A special human is made on earth almost as an echo of that event in the heavens (each of these days except day five describes things happening in High Heaven and on earth with the same language, a double meaning). And large numbers of humans are made on earth who are not yet in the image of God but He intends to make (a process) them in His image.

The seventh day you mention is an awe-inspiring wonder. That none of these days were literal 24 hour days in both realms is shown in that scripture, if one looks closely enough, teaches that the seventh day in Genesis one did not even BEGIN until after Christ was on the cross. How could this be? Hey, God’s Word, He can work it out… 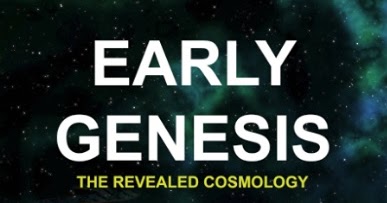 Thesis #14: The Seventh Day in Genesis One did not Begin Until After the Cross

This article is largely an excerpt from the book " Early Genesis, The Revealed Cosmology ". In this book I present evidence to support each...

It is my feeling that Genesis 1 is evidence that the Bible is the Word of God. The moment after the big bang, all matter was in the form of photons (see Degrasse Tyson’s Astronomy for Busy People) and as the universe cooled, matter precipitated out (“and God separated the light from the darkness”).

Physicist and Hebrew scholar Gerald Schroeder in his book “Genesis and the Big Bang” get into the roots of the Hebrew words erev (evening) and boker (morning) being chaos and order.
As others have noted Yom refers to eras as well as days. These could not have been 24 hour days as the sun was not cerated until day 4, again this is consistent with our scientific understanding of the creation of the universe. I believe that given an infinite amount of time, science and Genesis will agree completely, but we don’t have an infinite amount of time.

The order of the creation of life on earth in Genesis 1 is consistent with our current understanding of evolution. I find this fascinating.

The order of the creation of life on earth in Genesis 1 is consistent with our current understanding of evolution. I find this fascinating.

Really? Birds evolved from land animals, they were not created before them as in Genesis 1.

Really! Birds evolved from dinosaurs which were prevalent before land animals such as cattle (mentioned specifically)

Genesis Day 6 mentioned the creation of all animals (excluding birds and fish):

I see no differentiation between mammals and reptiles, etc, only ‘living creatures’. We can assume this includes reptilian creatures (presumably including dinosaurs) since they are never mentioned as having been created before.

It all depends on what question creation was answering. If the question from Adam was “how did all this I see come to be?” then it makes sense to have birds before land animals. The land animals Adam sees were not around 65 million years ago, but birds were. The dinosaurs are not relevant to that particular question, except insofar as birds may have been derived from them.

I guess a better way to say this is that in my opinion, Day 5 describes from the pre-Cambrian explosion to the Cretaceous-Tertiary mass extinction, where Day 6 describes the last 65 M years.