Scientists doubt the randomness of mutations 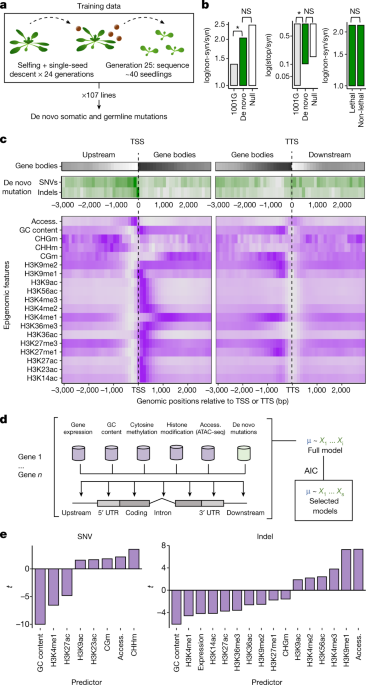 Data on de novo mutations in Arabidopsis thaliana reveal that mutations do not occur randomly; instead, epigenome-associated mutation bias reduces the occurrence of deleterious mutations.

Within most scientific literature random does not mean a complete absence of cause and effect or influence. It means not predetermined and worked out with that goal in effect. I’m not sure who you are and so I’m not sure what lens you’re reading that information through. So with that said, just incase , what’s not being said is that mutations are seemingly intelligently designed to occur.

This isn’t new. And it’s entirely natural, of course. No magic is involved. Evolution is awesome enough.

thanks for the answer! I didn’t mean that mutations are intelligently designed and that that article is proof of design. I just shared this article because I found it quite interesting.

Within most scientific literature random does not mean a complete absence of cause and effect or influence. It means not predetermined and worked out with that goal in effect.

Exactly. This goes back to the early experiments that defined random mutations. In those experiments they were trying to determine if the presence of antibiotics or bacteriophage caused specific beneficial mutations to occur that drove resistance to those challenges in bacteria. They didn’t. Instead, those mutations were always occurring in the background whether those challenges were present or not.

thanks for the answer! I didn’t mean that mutations are intelligently designed and that that article is proof of design.

Unfortunately, there are scientists who oversell their ideas which can be taken out of context by ID/creationist organizations. Another common example are scientists who claim that billions of bases of junk DNA doesn’t exist in the human genome because they found a few thousand bases of non-coding DNA that has function. Scientists are just as prone to using salesmanship to further their career as other professionals.

The paper had generated quite a bit of chatter on genetics Twitter. I haven’t had time to read it yet, but it sounds like a good study. What’s generated the chatter is confusion about what it means for mutations to be random (in the sense that biologists, and particularly evolutionary biologists mean). It’s long been known that mutation rates vary along the genome and that mutations are biased towards ones will little functional effect. I gather that this paper provides evidence that critically important genes are likely to be in low mutation regions. It’s long been speculated that something like this would occur as a result of natural selection favoring that arrangement.

The mutations are still random, however. That is, there is no mechanism by which the plant can pick which mutations occur, favoring ones that are beneficial rather than deleterious. Instead, there is an overall suppression of mutation in some parts of the genome. From an evolutionary point of view, that means the phenotypic effects are random, and adaptive changes only emerge as a result of natural selection. (Genuinely nonrandom mutations are in fact known: some bacteria insert bits of viral geneti material into their genomes for later use in CRISPR-mediated defense against the same virus.)