For any of you medically knowledgeable people around here … I’ve got a quick question about the practicality and reliability of something that could be a handy tool in the hands of institutional officials as they think of whether (or more likely how) to re-open.

At school I’ve got one of those handy infrared laser pyrometers which passively takes the temperature of surfaces without needing any direct contact.

Question: would this be a reliable way to detect fever in a person? By directing it in fairly close proximity at their forehead? While the big advantage would be ease of use, and no direct contact requiring constant sterilization between each use, I realize that the laser these are typically equipped with might (rightly) make some nervous about using these to point anywhere near the eyes of people. The laser on mine at school is inoperative which at least removes that concern, leaving only the needed temperature detection. [one could easily put tape over the laser part as it is only there as a visual guide so you know more exactly where you are directing it - it plays no role in the actual temperature measurement.]

I guess I could experiment on myself by taking my “under-the-tongue” temperature the regular way, and then compare it with a forehead-aimed readout (or perhaps a ‘mouth-aimed’ readout?) and then just be aware if any offset adjustment is needed as a calibration.

What other ideas do people have about helping institutions carry on more safely (or at least less dangerously) given the reality of their intent to re-open. Yeah - I know - it’s far from settled in the minds of many that they should re-open at all, or perhaps even is settled that they should not. But setting that aside here, what should and can they do to at least mitigate risks if they do?

Masks, and 6 ft distancing are among the standard recommendations commonly out there right now. Any more ideas to discuss (or elaborations on those given)?

I think the infrared no touch thermometers are really the only practical option for screening in a scHool or church setting. There are fairly inexpensive purpose specific ones out there. My only concern with one made to check frying pans is that checking body heat is a lot narrower range, and a thermometer designed for that purpose might give better readings, but you can experiment and see. Sometimes the sensors and guts on these type of products are the same, and just put in different packaging. If liability is a concern, it sounds a lot better in court to say you used a medical thermometer to screen rather than a cooking thermometer. Of course, a quick read digital thermometer inserted into the thickest part of the thigh gives an accurate reading and definitely tells you that you are done.

We used a variety of thermometers in my office, under the tongue, axillary, tympanic membrane, and infrared forehead, and all have their problems, being technique dependent. Nothing is as accurate as rectal, and quite honestly the old banned mercury thermometers probably were most accurate used rectally and correctly. In the end, we stuck with infrared forehead thermometers as they were quick, clean, and sorta accurate.
In the end, temps are pretty useless in my opinion, as if you have a temp, you know you are sick and no doubt symptomatic. It probably only is good for catching people boarding planes who know they are sick but want to sneak on anyway to get home. The other thing with Covid of course, I see that people are found to be pretty contagious the 24-48 hours before they are symptomatic. Temp in most illnesses goes up and down, so a normal temp may be found when it was elevated an hour before or will go up,an hour later, which is why your doctor doesn’t really pay it much attention to one reading but considers the your history more. If you have kids, you know that the kid “burning up” with fever in the middle of the night usually has no temp when you get to the doctor’s office.

Thanks, Phil. And now here at school with both an electronic (under-the-tongue) thermometer that I have been using, I’m comparing readings. Of course, I’m still a bit sweaty from a bike-ride and my sweaty forehead is exposed to an air-conditioned breeze, so it’s probably no surprise that my 33.4C (92.12 F) infrared forehead temp is way lower than the 97.1 F the under-the-tongue reading also just now registered.

Aiming the infrared down my throat (while holding my breath) got a little closer (96.1 F). But even then I get variance over about a 1 to 2 C range trying the same infrared throat reading multiple times (and variously holding my breath or then exhaling.) So precision is more of a problem. I suppose what it would do is maybe catch somebody with a definite fever who could the have their temp taken by a more accurate means.

Pyrometers come in a vast range of quality and range (from maybe around $100 or even under and upward towards thousands of dollars). Some have quite loose tolerances that might make them untenable for this purpose.

Yep, that is the problem. They are technique dependent and environment dependent. Surface temp and core temp are seldom the same. The tympanic infrared thermometers eliminate some of the environmental variation, but are dependent on having a clear shot at seeing the tympanic membrane so are fussy to use, plus you have the cleaning issue or buy disposabl,e covers with that cost.
The airport screening thermometers look like they do whole body imaging and probably pick out those who are outside the norm. If you do the forehead temp, try checking over the temple, as the temporal artery is fairly superficial and is more likely to reflect core temp.

The one my husband’s workplace (hospital) is using is the one that you push against the forehead, and then wipe in between each.

In the end, temps are pretty useless in my opinion, as if you have a temp, you know you are sick and no doubt symptomatic. It probably only is good for catching people boarding planes who know they are sick but want to sneak on anyway to get home.

I agree on temp. being useless/too late. On the other hand, parents routinely send sick kids to school because they can’t get time off at work and don’t have any other daycare options. I’m pretty sure how that’s going to play out this fall.

Of course, I’m still a bit sweaty from a bike-ride and my sweaty forehead is exposed to an air-conditioned breeze, so it’s probably no surprise that my 33.4C (92.12 F) infrared forehead temp is way lower than the 97.1 F the under-the-tongue reading also just now registered.

My dentist is using a no touch thermometer, and you have to wait in the car before they come out and take it. My friend took her family there the day before I took two of my kids. My friend’s family all had “fevers” according to that thermometer. They had been sitting with windows open and no A/C. They had to turn on the A/C and get checked again 10 minutes later. Then they were fine.

I took note and remembered to keep my car running until after the temp check, so my kids passed. The lady in the SUV next to mine made that mistake and also had to try again after running the A/C. She was on the sunny side. Her teenager sitting next to her was fine.

I hope that if you actually had a fever, you’d still register feverish even if sitting in the A/C? Otherwise, these temp checks are pretty pointless, especially in the south in summer.

Yeah - I don’t doubt that immediate recent environment has a huge effect on body temperatures of our peripheral parts (and still more our exposed skin)! We all know how cold or warm our hands can get just from their exposure to a variety of temps. So I’m guessing nobody leans on these things at all if they really want a serious reading on core body temperature. Perhaps they could help catch a few temperature outliers (to then check further for fever using other methods), but it would seem they shouldn’t be viewed as very dependably accurate even for that. At least that’s my takeaway so far here.

Here is a summary of some modeling:

1/5 Modeling aerosols from an infector in different classroom scenarios. Here is one with instructor as super-emitter, emissions from speaking 50% of time, breathing, and coughing 7 times in a 75 minute lecture. Classroom = 100 m2 x 2.8 m ceiling w/ 34 students. #COVIDSchools https://t.co/wCOz4RMqaC 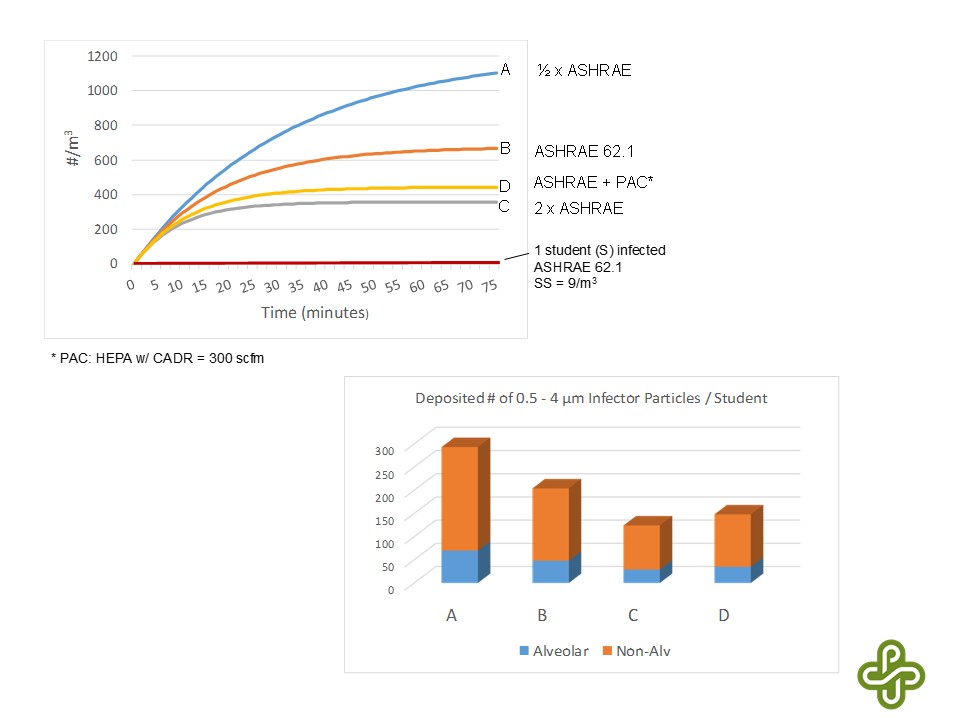 My little brother used to hold a warm facecloth to his forehead so he could fool our mom into thinking he had a fever. It worked!