Our sun in high resolution

Here’s an invitation to pause from theological debates for a moment and take a look at this image of the sun taken by the Inouye Solar Telescope in Hawaii: 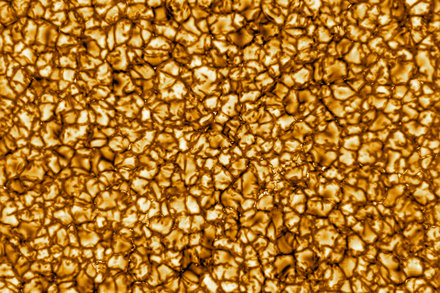 A new telescope in Hawaii takes aim at our nearest star and its mysteries.

More than seven miles of underground piping are needed just to get rid of the solar heat the telescope collects, and to keep the instrument cool.

I saw it earlier today on my Facebook feed and didn’t read the title at first and thought “why is everyone giving hoopla over popcorns kernels?”

Ha! I thought something similar… it just looked like a bunch of caramel corn smooshed together.

a bunch of caramel corn smooshed together.

I was frustrated for the lack of any visual scale to help us know the magnitude of size visible within that zoom. After some looking about on the web … apparently each one of those “popcorn kernels” is about the size of Texas!

[also frustrating that the temporal scale was so accelerated too, but at least they left a clock visible in the corner of this video so you can see the minutes rushing by. Yeah I know the motion would be nearly indiscernible viewed in real time, but on the other hand it would be … real (which would be even more awesome to contemplate knowing the size scale).]

Helio Viewer is also a really cool site. It doesn’t have the same resolution, but you can pick from different filters and different instruments to overlay different solar features, and even make a movie you can share with others. It’s a really cool way to see the interaction between sunspots, magnetism, and solar prominences.