I recently saw a counterclaim to C.S Louis’s trilemma argument, written by Bart Erhman. In case you don’t already know, Louis’s trilemma discusses how Jesus couldn’t have been a lunatic or a liar, therefore he was Lord. Bart Erhman’s argument is described as the following on Wikipedia:

“A widespread objection is that the statements by Jesus recorded in the Gospels are being misinterpreted, and do not constitute claims to divinity. According to Ehrman, it is historically inaccurate that Jesus called himself God, so Lewis’s premise of accepting that very claim is problematic. Ehrman stated that it is a mere legend that the historical Jesus has called himself God”

I’m really not sure how to respond to this as a Christian. Could anyone help me?

Hi, Farfalleus - and welcome to the forum.

I think part of the challenge here is that Lewis’ critics are right. His trilemma failed to consider a fourth option - that those who recorded Jesus’ words could have embellished them, remembered differently, or added to them later. It is a logical possibility - even a probability, given how we remember things and what happens to languages. Christians today just need to come to grips with the fact that rationality, proof, air-tight evidences - all that stuff our western minds chase after so frantically will at the end of the day not be enough (even if we were ‘successful’ with it.) We so badly want to imagine that we can build a bridge where every brick is human logic and reason - no atom of faith needed anywhere in it; and then (the Christian fantasy continues…) we drag the poor atheists to this bridge where they fail to find anything unsound about it, and are forced to concede and cross over with us into the promise land. And even if that fantasy were all to come true - it would still end up being a very human ‘salvation’ instead of the Divine one. [And I must also concede that this hasn’t always been just ‘fantasy’ - there may be a good many historically who actually were ‘compelled’ by the likes of Aquinas or later luminaries like Lewis, and on the strength of human argumentation, made their first wavering steps into faith. But I would also then insist that I don’t think God leaves them there. So I don’t want to insist that things can’t at least start with the intellect. Many times they have.]

It isn’t that there aren’t answers (even good ones I think!) that can be given to your friends. But I just wouldn’t try to build your castle on Lewis’ Trilemma. We should concede from the outset that faith will be in play - and that faith will include a trust that God had a hand in how scriptures were later set down, compiled - and even canonized much later. Our willingness to look for the ongoing work of the spirit far past just Bible times and early church times is key here. We trust that the words attributed to Christ (remembered, penned, translated and paraphrased as they inevitably must be - which will necessarily make them not the exact Aramaic words he actually spoke) will nonetheless be what the Spirit intends for us to receive from Christ’s teaching. And even more importantly yet - then, the testimonies of changed lives and the effects those lives have had, both then and now are all part of a powerfull collective testimony (not proof - or even evidentiary compulsion necessarily) but just an open invitation there for all to taste and see for themselves. Our perennial temptation to nudge it over into compulsion territory seems to always be where the mischief starts. But I’m pretty sure God isn’t interested in taking prisoners.

I find objective evidence for God’s providential interventions into the lives of his children quite satisfying. (You might have guessed. ; - )

Ehrman was raised in the tradition of Biblical inerrancy and apparently experienced a crisis of faith when one of his Princeton professors scribbled on a paper that maybe Mark made an error.

Yet John, who walked with Jesus for 3 years and saw the resurrected Lord, made it clear that Jesus was God.

Gospels are not modern journalism. There was no, or stenographers, or any sort of on the spot recording. Gospels were not edited or cross checked for accuracy. You cannot expect them to be word perfect. The point of a Gospel is to make you believe what the writer did. Mark obviously thought that Jesus was divine but did everything He could to keep it quiet. He told people not to reveal what they knew. John goes almost the opposite way by implying it in His use of “I Am”, and stating it bluntly in the prologue.
The point is that Jesus is portrayed as the direct son of God with all that comes with it.
Debunk Jesus and you debunk Christianity, it’s as simple as that

That’s a pretty good summary, and nearly aligns with my understanding of the “therefore know for certain” from Acts 2:14-36.

“But the anointing that you received from him abides in you, and you have no need that anyone should teach you. But as his anointing teaches you about everything, and is true, and is no lie—just as it has taught you, abide in him.”

It’s helpful to have a now and not yet conception of the kingdom, as well as what Sproul so well described as the ability to distinguish, but not separate two concepts.

Thank you to everyone who responded! I didn’t think people would respond as quickly as they did.

I realize that there’s not much we can do to avoid or disprove this argument, and instead of building an argument on Louis’s trilemma, we can still build an effective one around it (Evidence of the resurrection, the bible’s reliability, the apostles’ reliability, the Acts of Pilate, etc.) to support what was written about Jesus. Please do tell me if you have a contradicting opinion or something to add to this, as I’m always looking for other perspectives.

That being said, if anyone could somehow find any other supporting evidence, that would be greatly appreciated.

Yes, the “Jesus as Legend” option wasn’t addressed by Lewis, but there are several other Christian/Apologist authors who have since taken up that question. One of the better books I’ve read is this one by Boyd and Eddy, for anyone interested: The Jesus Legend: A Case for the Historical Reliability of the Synoptic Jesus Tradition - Greg Boyd - ReKnew

Ehrman should know better; he’s either being willingly ignorant or is so uninformed on the issue that he shouldn’t be pushing his (demonstrably incorrect) opinion.

Michael Bird is a NT scholar who has directly interacted with Erhman’s claims that Jesus never claimed divinity. Erhman’s ideas have definitely met a scholarly challenge, it’s not like he had the last word. 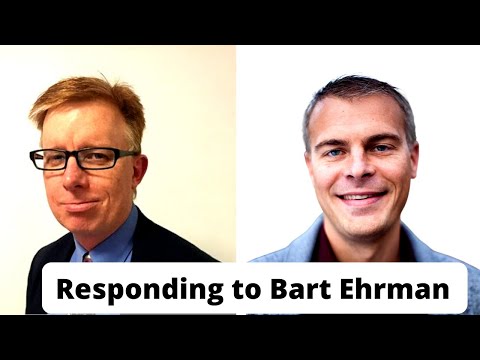 Here is a link to Bird’s book in response.

Hi @Farfalleus,
As some people have replied to a slightly more general question than the one that you asked, let me follow suit. I think that many objections like this one attributed to Ehrman are part of a wider epistemological problem in which a person sets their own standard for sufficient evidence and then demands that God (or apologists, or whoever), meet that standard. This has problems, perhaps most fundamentally that it places the person above God, which contradicts/negates the very nature of who God is (i.e. if God exists, He would be the one to set the standard for how much and what kind of evidence is “sufficient”). If you want some names to search for, look for presuppositional apologists like John Frame, Greg Bahnsen, Scott Oliphint, and Cornelius Van Til.