So I just watched a debate between Michael Jones of Inspiringphilosophy and Thomas Westerbrook of Holy Koolaid regarding the alleged threat posed by Christianity. Though I thought that the dialogue between the two was quite respectful and interesting, I couldn’t help but wonder why we were having this discussion in the first place.

Is Christianity harmful? Potentially. Just look at the snake handlers and faith healers Thomas brings out! This is true for all positions one holds, atheism certainly not exempt. If that is what he is advocating for, then I would grant him that. But he seems to imply very strange things that I cannot get behind, like that Christianity is inherently dangerous and something must be done about it, mentioning things like the fact that the popular belief in the efficacy of prayer amongst Christians leads a radical minority to sit on their hands and reject medicine means that said belief in prayer is inherently dangerous, as if this applies to the rest of the faithful. This wasn’t the first, nor shall it be the last time he treated a broad group of people (which he acknowledged was diverse) like radical fools. Conveniently, he also seems to ignore The very man The Faith is built upon to determine if it is truly deadly, how we’re supposed to be replicating Him, and between you and me, I’m with the Monty Python crew: there isn’t much about Him to detest.

That being said, IP is not about to leave this unscathed. First and foremost, his Pillsbury Doughboy analogy was incredibly laughable. Pillsbury Doughboy doesn’t have any convictions or beliefs; he can’t even talk! It’s not like he’s The Postal Dude visiting people in their dreams, where some moron could take these visions or a book about him as a sign to mimic his wrongdoing. He also slipped in several “whataboutisms” in defense of Christianity, mentioning the wrongs of Islam and what have you for some reason. I do not care about the wacky lovable antics of The Taliban, nor do I care that the people involved in The League of Militant Godless or the 2015 Chapel Hill Shooting or Columbine or whatever were inspired in part by their atheism. That’s not what we came for, dude.

Am I being unfair in my assessment? Why not see for yourself and tell me what you think? 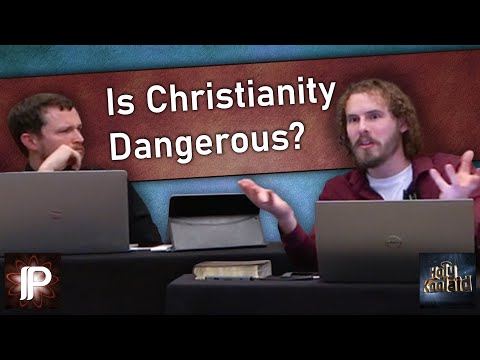 I looked at it for about a minute and was reminded of all I don’t like about debate format. The whole adversarial advocacy with no genuine attempt to acknowledge good points that serve the other side unless doing so can be spun in ones favor. No thank you.

Besides, I don’t believe everything of importance to our humanity can or should be subservient to our rationality even though I myself don’t find I require a concept of God which assumes He is the creator of everything, is mega powerful and the arbiter of afterlife alternatives. Even from my agnostic standpoint I find plenty of meaning for “sacred” and “soul”. More importantly even though I am not immersed in a religious tradition myself I can see how that option may very well provide better access to what I think really is of greater significance than our rationality to our humanity. What is really sacred deserves our humility and respect and even if people approach it differently than I do at least they are acknowledging it and attempting to promote a way of life that will continue that. I have to wonder if I would enjoy the worldview that I do were it not for Christianity in the culture and my minimal early exposure. So I hate to hear people speak snidely regarding something they have no insight into.